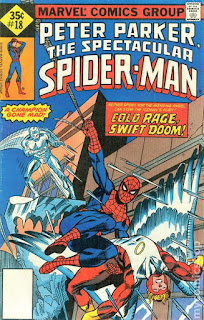 In a Nutshell
Spider-Man helps free Iceman from Rampage's control!

Plot
Though Stuart Clarke - Rampage - lies unconscious, Iceman continues to go on a rampage, attacking Spider-Man and Angel. Their fight spills out of Champions' headquarters and into the streets, though Angel is held up by the arrival of lawyers representing the contractors who built the building. As Spider-Man battles Iceman across the city, he manages to drag him into a carwash, where the sudden intense hint thaws his icy form and snaps him free of Clarke's lingering control. They return to Champions' headquarters to discover Angel has forced the contractors to repair their shoddy work for free, making the building easier to unload. Later, Spider-Man returns to New York as Angel returns Rampage to the hospital and Iceman decides to head out on his own.