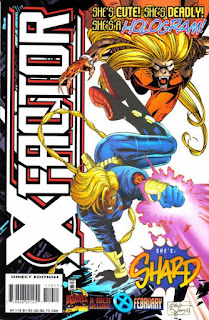 Plot
Wild Child wakes up in the morning, determined to make a fresh start and put his relationship with Aurora behind him, when he's suddenly greeted by Shard's hologram. Meanwhile, the rest of X-Factor is busy preparing security defenses against the Adversary, though a weakened Roma insists Forge's technology won't be able to stop him. Shard wants to have some fun, so she and Wild Child race out of the base on his motorcycle, attracting his teammates' attention. Out in the desert, the Adversary gloats over Naze's final resting spot, little realizing the shaman may still live. Back in Virginia, Polaris follows after Wild Child & Shard but when she tries to get them to come back, Wild Child snaps at her about Havok before racing away. Elsewhere, Val Cooper receives an update on the captive - and alive - Sabretooth, who briefly breaks free of his restraints before being tranquilized again. Later, Wild Child & Shard arrive at a rave and run afoul of some members of the Friends of Humanity, ultimately fight them off. Shard announces she likes Wild Child, but fritzs out just before they kiss. Wild Child returns to Falls Edge and, feeling bad, find Polaris and apologizes for snapping at her. Polaris declares that while she still loves Havok, she's done feeling pain over his absence. He'll be back when he's back, she declares; both she & Wild Child need to get on with their lives.

Firsts and Other Notables
Hardly a month after his apparent death, this issue reveals that Sabretooth in fact survived the events of Sabretooth Special, his death faked to allow the government the chance to study his body and healing factor, all of which is setup for his eventual placement with X-Factor. 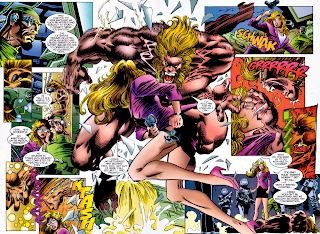 This issue establishes that the Adversary's goal is to destroy the world so it can be remade in the interest of chaos. It is also teased here that Naze is not dead (he's not, yet). 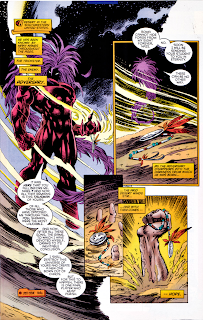 Mystique doesn't seem to know anything about the Adversary, despite being on hand when Forge (seemingly) sacrificed the X-Men to defeat him in "Fall of the Mutants", an act which earned Mystique's animosity towards him until it was overshadowed by his role in her death (and when Mystique learned Rogue and the rest of the X-Men were still alive). 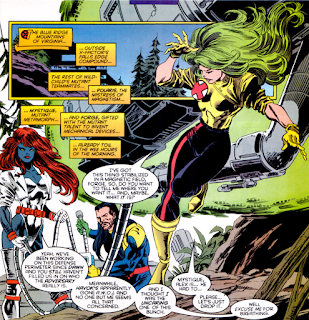 A Work in Progress
Shard establishes that she can physically interact with the world around her, but is also immaterial and can pass through solid objects (she's also able to use her energy-based powers later in the issue). 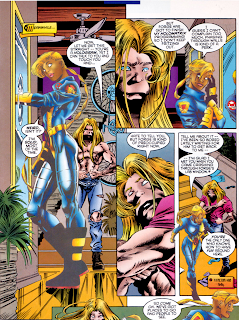 At one point Wild Child expresses a desire to talk to Val, as Mackie continues to tease a past between the two.

He also learns that Shard is Bishop's sister (meaning that apparently Wild Child knows who Bishop is, despite Bishop not really having interacted with Alpha Flight much).

The Grim 'n' Gritty 90s
Wild Child takes Shard to a rave and it becomes a weird mashup of the 90s and made up future-speak. 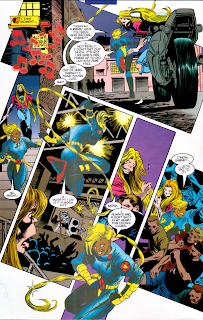 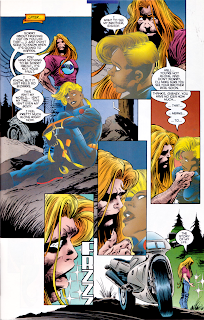 Austin's Analysis
While this issue is ostensibly about building tension ahead of the Adversary's impending attack on Forge, the bulk of it is dedicated to Wild Child and Shard's wild night out, much to its detriment. Shard is a...complicated...character to start with, and while new cast members coming into old series absolutely need time in the spotlight in order to develop and ingratiate themselves to both their fellow teammates and readers, pairing two such characters together early in their tenure and then isolating them from the rest of the cast (such as it is) for the duration of the issue doesn't really work - at the very least it, it has to work that much harder to succeed, and this doesn't. It's still just really hard to care about Wild Child and the holographic representation of Bishop's sister as they pal around a 90s rave and fight some bigots (is Shard - this Shard, at least, even a mutant?) under normal circumstances, but especially when Mackie is trying to build up tension elsewhere.