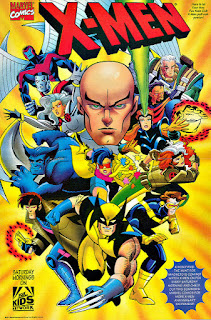 For our next "Patreon First" review series, I will begin reviewing every episode of one of the franchise's seminal pieces of multi-media expansion, the original Fox Kids animated series! Airing from 1992 to 1997, the series was hugely popular and no doubt responsible for creating a massive influx of X-Men readers, helping keep the line at the top of the sales charts even while the industry as a whole cratered around them.

In recent years, X:TAS (as the kids say...) has become something of a much-beloved nostalgic favorite in some corners of the internet, spoken of with love & reverence by many for whom it was their first encounter with Marvel's merry mutants. I have long been interested in revisiting the series with a more critical eye - I have re-watched most of the series' first three seasons since those original childhood airings at least once, but never made the effort to truly analyze the show on a quasi-objective, episode-by-episode basis - to see how much of the love the show gets now is warranted, and how much of it is derived from pure nostalgia (not that there's anything wrong with that...).

While I was just about the right age for it to land when the series first aired (I was 11 when the series began, so maybe a touch on the old side) and still remember vividly the excitement I had for its launch, I was already roughly six months into being a devout X-Men reader by the time of the series premiere, meaning that, for me, I have always viewed the show as a different take on a thing I already loved, as opposed to something I loved on its own merits which led me to other stories in other media. As a result, my reviews will likely also have a heavy focus on the act of adaptation: how do these characters/stories differ from their comic book counterparts, how well do they succeed on their own vs. as adaptations, and how well does the animated series speak to the core concepts of the X-Men as a whole, both at the time it aired relative to the issues being published then, and in general, especially in terms of presenting those concepts to an audience wider than the one reading the comic books month in and month out.

The animated series is also one of the biggest representations of the X-Men, anywhere, in terms of its audience reach (at least until the movies come along, and even then, the animated series had an edge in terms of being a recurring, weekly presence), with more people having seen one or more episodes of the show than have ever cracked open an X-Men comic book, and that alone warrants a closer look from someone chronicling the entire history of the X-Men. Plus, with the series' recent release on Disney Plus (along with the release of the full series on DVD a few years ago) it's more accessible now than ever before.

So starting next week, I'll begin to take a look at the series, one episode at time. I've decided to break these reviews into seasons, just to maintain some level of variety with the Patreon First reviews. So I'll do one season of the animated series, that switch to another X-adjacent comic book series, then review another season of the show, etc. Also, X:TAS is one of those shows which suffered some horrendous problems in terms of its episodes airing out of order, especially later in its run. I will be re-watching/reviewing these in the order they appear on Disney Plus (because that is simply the easiest way for me to do so), whether that is the "correct" order or not (I suspect not, but I admittedly haven't looked too closely). Certainly, the matter of when an episode aired relative to its placement in the overall chronology of the series is something I will address in any and all relevant episodes' reviews.