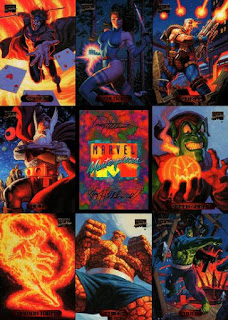 Additionally, there is a parallel set in which all 140 of the main cards are produced with the Hildebrandt brothers' signatures reproduced on the front of each card in gold foil.

Cardfronts are full bleed, featuring only the character name center-bottom and the Marvel Masterpiece logo on the top left corner, both presented in gold foil.

Cardbacks are landscaped, featuring a zoomed-in reproduction of the cardfront image, along with a brief character bio and a behind-the-scenes quote from the Hildebrandt brothers regarding the creation of the card specifically (or the set in general).

Firsts and Other Notables
All of the cards in this set are drawn by sci-fi/fantasy artists Greg & Tim Hildebrandt, twin brothers best known for their various Lord of the Rings calendar illustrations and assorted book covers & movie posters (including a UK reproduction of the original Star Wars theatrical one-sheet).

Each image includes a signature from the Hildebrandts on it, with each card alternating between "G & T" and "T & G", something the brothers said they did in order to give them each equal credit for the overall work.

In the wake of Marvel's acquisition of Fleer, this set is produced by them, after Skybox did the first two.

The characters are presented in straight alphabetical order.

Captain Universe, the cosmic force which takes on various hosts to function as a specific entity, receives its own card, likely due to its upcoming role in a promotional comic (in which readers could pay to customize the issue such that they served as the host of Captain Universe in the story, with minor details changed depending on the results of a questionnaire filled out by the reader).

Jack of Hearts, a character who hadn’t really been around since the early 80s (and who would later briefly join the Avengers) gets a card.

Per one of the notes on the cardbacks, Nightcrawler was the first card the brothers painted.

Nebula appears in the form that would later inspire her appearance in the Marvel Cinematic Universe. 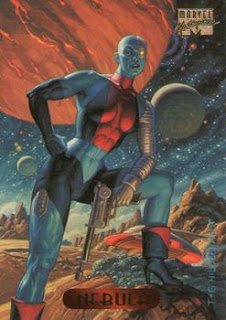 Both Thanos & Thing get up skirt shots. 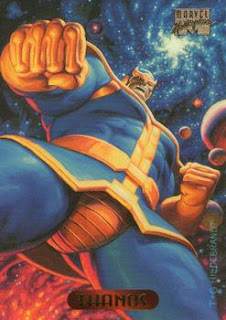 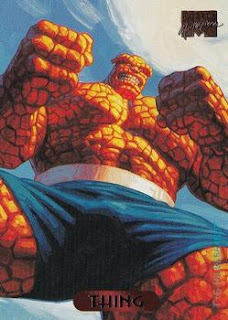 Collection Recollection
This series was released at a time when I still believed I had some level of artistic skill, and would use figures from trading cards or comic book panels/covers as guides in my own drawings. For whatever reason, a number of cards in this set seemed reproduceable via my (meager) skills, and as a result, quite a number of the character drawings I did for the super-powered characters in my very first novel were based on this series.

X-Related
Of the 140 cards, 36 of them are X-related (not counting villains, including the X-Men of 2099). The team breakdow is as follows (with X-Factor once again getting the short-shrift).

Jean Grey's card doesn't feature her recently-reclaimed Phoenix codename, most likely because Rachel Summers receives a card under that name.

Cable’s gun in his card always reminds me of a tube of toothpaste for some reason. 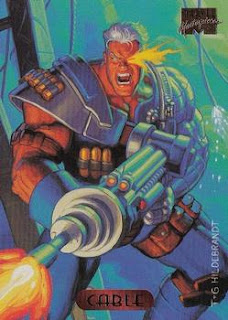 White Queen gets a card, but Banshee doesn't.

Mondo, despite not yet appearing in a comic book, receives a card. 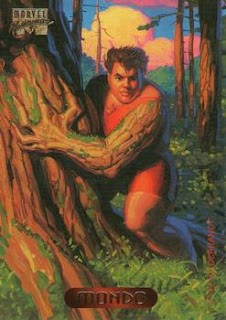 Exodus, in the wake of what is essentially his peak as a character in Bloodties, gets his own card.

The Grim 'n' Gritty 90s
We are still in the era of the Leather Jacket Avengers. Other 90s stalwarts include Blackwulf, Blood Wraith, Bloodaxe, and Century

The 2099 imprint is well-represented, with all the characters carrying their own series represented.

Daredevil appears in his “Fall From Grace” costume, while Elektra appears in her post-resurrection white outfit. 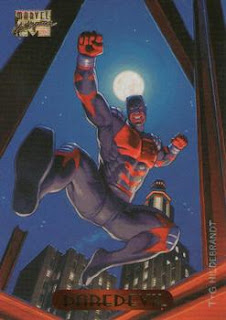 Colossus is painted in his Acolytes uniform.

If you thought Darkhawk was 90s, I present to you a card for his archenemy, Evilhawk.

The Green Goblin in this set is specifically the Harry Osborn version (who had died in a then-recent story).

Hulk has a gun on his card; that’s pretty much the 90s in a nutshell. 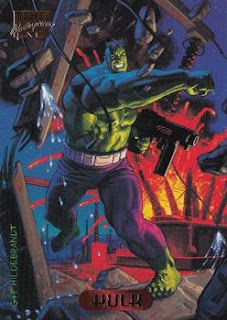 Invisible Woman is once again in her sexy 90s costume.

Namorita appears in her Kymaera form (and under that name). 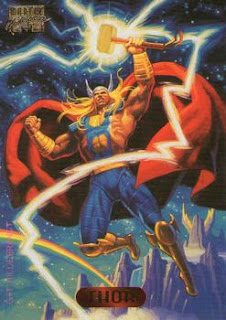 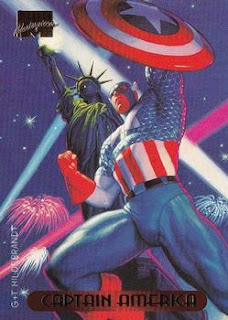 The perspective makes it seem like Cap and Lady Liberty are rushing into battle together. 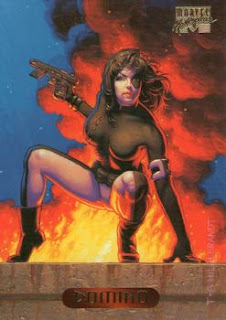 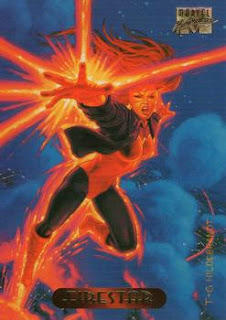 I’m a sucker for “beam of energy coming out of every finger” depictions. 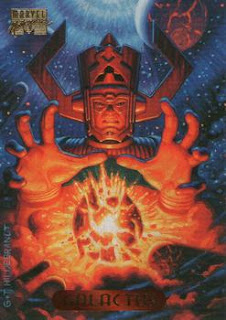 Great rendering of both the scale & power of the character. 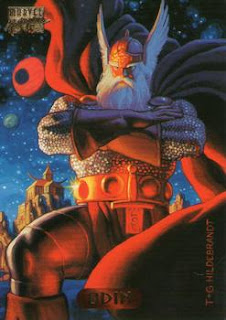 Nice solid figure. You don’t see Odin get his own card very often. 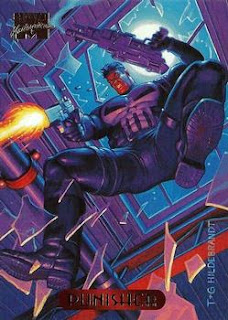 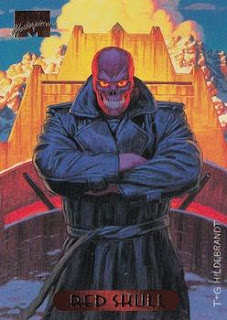 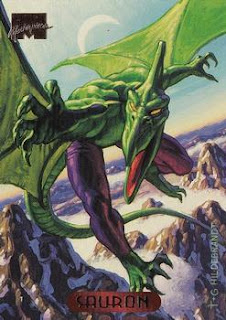 Love the way his animal & human features blend together. 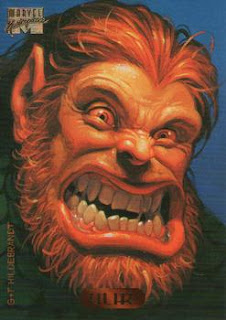 Tons of personality just in a head shot

Austin's Analysis
While not the objectively best Marvel Masterpieces series - the first series is, overall, probably better artistically, and contains a more “classic” lineup of cards, while I really do enjoy the second series’ “first appearance” panel recreations on the cardbacks - this one is probably my favorite. It improves on the second’ series multiple artists approach by returning to the single artist assignment of the first series, while also expanding the series by 50 cards, allowing for both more consistent art and greater depth of coverage. And I just really like the Hildebrandt Brothers' work, especially the way they play with light and shadow.

Of course, it’s not without its flaws; a sizeable chunk of the series’ extra cards are handed over to 90s also-rans like the 2099 characters, or the just-introduced (and similarly-clad) Generation X cast members. The extra set size also lends itself to repetition in the form of some of the faces and character poses, and the cardback info is scarce (with the behind-the-scenes info from the artists more often random or superfluous than informative). But nevertheless, I have a lot of affection for this set, coming as it does at the crest of both my personal trading card-buying boom and the industry’s, while featuring some of my all time favorite cards and consistently enjoyable art across the set.