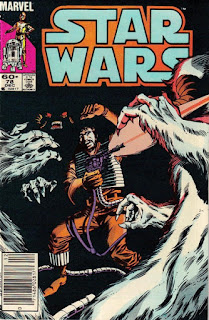 In a Nutshell
Wedge Antilles reveals what happened to him after the Battle of Hoth.

Plot
After their long range sensors detected a nearby Rebel transport, Luke, Leia & Lieutenant Hightower investigate, with Luke fervently hoping Wedge Antilles, missing since the Battle of Hoth, must be on board. But once they enter the ship, they find it abandoned, with a only the ship's log, left by Wedge, to tell the tale of how Wedge & Wes Janson survived the battle only to be marooned on the Hoth, unable to signal for help for fear of alerting the TIE fighters, left behind to monitor the planet by the Empire. After Wedge & Wes eeked out a survival existence for several months, a group of scavengers arrived on the planet. They killed Janson, but Wedge managed to steal one of their ships, leading the rest of their craft into the path of the TIE fighters. But Wedge's stolen ship was damaged in the escape, and the log ends with Wedge noting that it is now adrift. Just then, Wedge appears outside the viewport, having been performing exterior repairs using material in the ship's hold that had been previously scavenged. Luke is overjoyed to be reunited with his friend, and the Rebels return to Arbra for a lengthy celebration.

Firsts and Other Notables
This is a fill-in issue, telling an untold tale of Wedge Antilles, revealing that he got stuck on Hoth after the fight with the Imperials in Empire Strikes Back, which is, presumably, why he hasn't appeared in the series at all up to this point. To underscore that it's a fill-in, even the masthead is changed for the issue.

Interestingly, this issue confuses Wedge with Biggs, as it states that Wedge is Luke's old friend who grew up with him on Tatooine (which is why Luke is so emotional throughout the issue, as he desperately jopes Wdge is alive); it was, in fact, Biggs who Luke actually grew up with, but Biggs died during the attack on the first Death Star.

Wedge reveals that he was stuck on Hoth alongside an injured Wes Janson (who was his Snowspeeder gunner during the Battle of Hoth), who died before they found a way off the planet. Later stories in the Expanded Universe would contradict this, as Wes became a fixture in the Rogue Squadron (and Wraith Squandron) books and comic series, as well as a number of later EU novels and stories, with Wedge's adventure (and Wes' fate) as depicted in this issue retconned into being a story Wedge would tell new recruits (punctuated by having an-alive Wes turn up at the end). 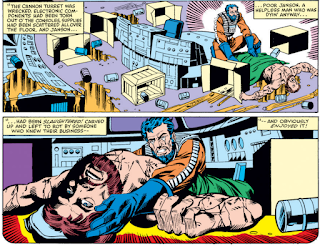 Creator Central
The story is written by former series writer David Michelinie (presumably, it was something he wrote before leaving the series and was then shelved for use as an inventory story), and drawn by Luke McDonnell (an artist whom I mostly think of as the penciler of Iron Man during Denny O'Neil's mid-80s run).

A Work in Progress
This issue introduces a group of scavengers who are depicted as more traditionally alien than most of the established Star Wars races. 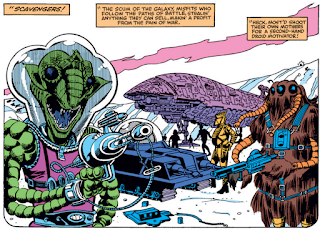 Wedge also seems to imply that Hoth, like Tatooine, is part of two-sun binary system; this is not the case.

Austin's Analysis
Putting the aside the continuity error that mistakes Wedge for Biggs (and Biggs for someone who is still alive), it's kind of surprising the series didn't do this kind of story more often. Given the (mostly understandable) limitations LucasFilm placed on the creators involving what they could and couldn't do with the main characters and overall narrative, putting one of the minor characters from the films (one who, presumably, LucasFilm was more hands off regarding) into the spotlight seems like a no-brainer. Wedge is the perfect example of that kind of character - even if his fame amongst fandom is a more recent thing - but it would work for any of the variety of characters hanging around in the background of scenes whom were later named by action figures, books, etc. Michelinie did something similar with Shira Brie - creating an original character to interact with the main movie characters, one who could actually develop and experience a character arc (and Duffy will do it herself after Jedi as well) - but the same idea could apply to an existing, minor character.

But for whatever reason, the series doesn't go to this well very often. Even here, the Wedge-centric tale is a fill-in, rather than a part of the ongoing narrative. It's perfectly fine, featuring some of the broader sci-fi elements that characterized Goodwin's run (it wouldn't be surprising if this had been sitting in a drawer since right after Empire) and crisp, clean art, but it stands as something of a missed opportunity for the series, featuring a character who would have been a natural fit for a main character working alongside Luke and Leia and Han, but who enjoyed a bit more narrative freedom as a result of not being them.

Next Issue
The Battle of Endor unfolds in Return of the Jedi #4!