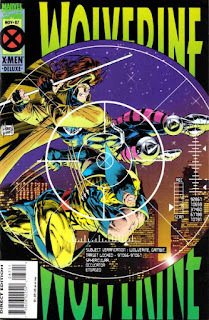 In a Nutshell
Wolverine & Gambit team-up in Madripoor.

Plot
Gambit, concerned about the presence of Sabretooth in the X-mansion, joins Wolverine in Madripoor, and the pair bust into the Princess Bar, suspecting foul play. But it simply turns out to be a surprise party thrown by Wolverine's friends, celebrating his return. The fun is cut short, however, when a pair of dead Hand ninjas break through the ceiling. As they investigate, Wolverine tells Gambit a tale of his past when he worked as a government operative alongside Maverick & Sabretooth, during which Sabretooth acted selfishly, yet also was instrumental in getting Maverick & Wolverine out alive. Shortly thereafter, they're attacked by the mysterious assailant who killed the ninjas, who turns out to be Maverick. Infected by the Legacy Virus, Maverick hoped to be slain in battle by Wolverine, a warrior he respected. Wolverine scoffs at the notion, telling him needs to face death head on. Maverick admits he's right, then adds that maybe Wolverine should take his own advice.

Firsts and Other Notables
Maverick, last seen in issue #64, pops up in this issue, and it’s revealed that he's contracted the Legacy Virus (making him, at this point, the second most notable, living, character with the disease, after Pyro); somewhat amusingly, Maverick will become something of the standard bearer for the Legacy Virus plotline, as he’ll receive a short-lived solo series in the mid-90s in which he’ll still be infected, keeping the virus at least somewhat in readers’ minds even when the rest of the X-books have mostly moved away from the plotline. 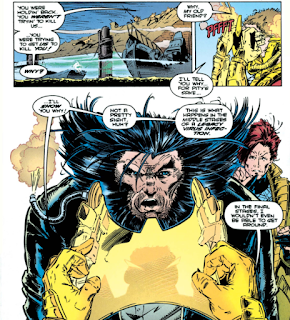 Gambit also guest star in this issue, cementing his role as Hama's go-to X-Men guest star (after his similar appearance in issue #55-57). 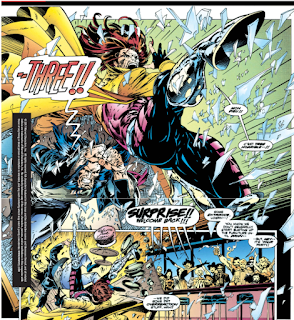 It turns out Gambit is no stranger to Madripoor or the Princess Bar (though of course we never saw him hanging out there in all the times Wolverine was there earlier in the series). 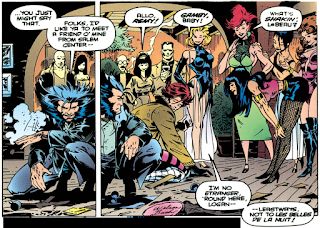 Rose Wu, who last appeared in Uncanny #257, pops up, having physically transformed since her last appearance (something which makes me wonder if Hama is using dialogue to cover for Kubert drawing her off model) and bought O’Donnell’s share of the bar after leaving Landau, Luckman and Lake.

The bulk of the series’ Madripoorian supporting cast from its earliest days are on hand, including O’Donnell, Archie Corrigan, Police Chief Tai & Tyler Tiger. 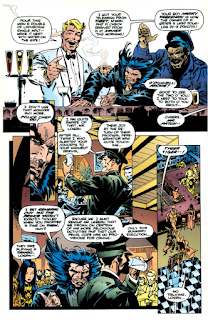 A Work in Progress
Off-panel, Wolverine arranged for Professor X to buy Harry Tabeshaw a plane to replace the one the X-Men commandeered in issue #85.

Wolverine's tale to Gambit about a previous mission with Sabretooth & Maverick (a group that will loosely come to be known as Team X) is presented as a flashback. 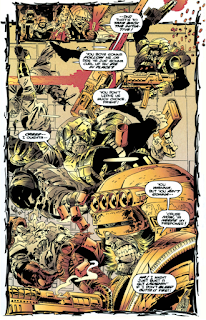 The Reference Section
There’s a pair of DC references in this issue:when the Hand ninjas fall down through the skylight of the Princess Bar, the crowd proclaims “look, up in the sky”, and Wolverine responds “it’s not George Reeves” (the actor who played Superman on the 50s TV show). Later, as Maverick prepares to reveal himself, Wolverine says he’d better not be a psycho millionaire with a utility belt.

The Best There Is At What He Does
Wolverine gives arguably his funniest line when, upon learning Maverick picked a fight with him to die a warrior's death, he responds "what am I, a Viking funeral director?" 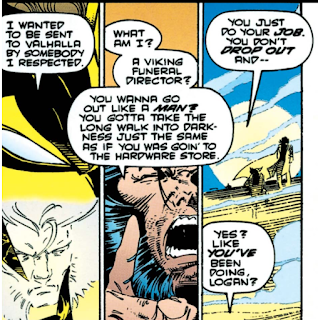 Austin's Analysis
After roughly a year in the wind, this issue marks the beginning of Wolverine's gradual return to the fold of the X-Men (culminating in his return to the mansion in issue #90). In that spirit, Gambit pops up - to discuss the presence of Sabretooth in the mansion - thereby looping Wolverine into the (non-crossover) happenings of the X-Men for the first time since issue #75. This is further compounded by the arrival of a Legacy Virus-inflicted Maverick, thus bringing the other notable ongoing subplot of the X-Men into Wolverine's book. More importantly, Hama uses Maverick and the Legacy Virus - specifically, Maverick's desire to die a glorious death at Wolverine's hands rather than a slow one at the hands of the virus' - as the trigger to motivate Wolverine's return to the X-Men. He's spent the preceding year's stories, believing he's on the verge of death, traveling around, making amends, and preparing for death. When Maverick tells him to listen to his own advice about tackling death head on, it makes Wolverine realize he's been doing much the same as Maverick by letting death dictate his actions, thereby laying the groundwork for the end of his self-inflicted sabbatical. As much as his involvement in "Final Sanction" may have been presented as a one-off adventure given the stakes involved, this issue makes it clear: Wolverine is heading back to the X-Men.