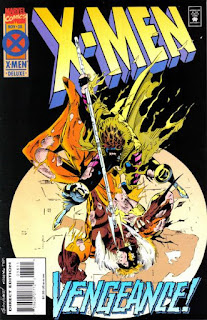 In a Nutshell
In the wake of "Phalanx Covenant", the X-Men relax and recoup.

Plot
As Xavier, Scott & Jean ruminate on the recent changes to the school, Beast continues his research into the Legacy Virus while Iceman & Rogue hang out by the pool. Later, Psylocke & Phoenix train in the Danger Room before giving way for Cyclops, who is overseeing Sabretooth's daily exercise regimen. However, Gambit enters the control room tells him Jean needs his help, offering to oversee the session himself. Elsewhere, Carter Ryking is visited in prison by Adam X. Back at the school, Xavier & Bishop discuss the loss of data caused by Banshee's necessary destruction of Xavier's ready room. Elsewhere, a comatose Legion experiences a vision of Destiny. Back at the mansion, Gambit dials up the intensity of Sabretooth's Danger Room session, then attacks himself, soundly beating Sabretooth. With Sabretooth at his mercy, Gambit tells him won't kill him, because being part of the X-Men means too much to him now, and that the best way to fight Sabretooth is by being happy together with Rogue, a fight which a passing Rogue wonders if they can win. As Beast takes a break from his research to go out to dinner with Iceman, Xavier, Scott & Jean meet again, and Xavier finds that, despite the group's losses & setbacks, he remains more hopeful than ever for the future.

Firsts and Other Notables
Following on the heels of Uncanny #318, this issue acknowledges the change in name of the X-mansion to the "Xavier Institute for Higher Learning", as it opens & closes on Xavier, Cyclops & Phoenix looking upon the new sign Emma had delivered for the school.

In a one page interlude, we see Hazard (of issues #12-13 fame) meet with Adam X, who is still looking for “Milbury”, which has led him to Hazard. This is setup for Adam’s larger role in the following issue, but also marks the first time Mr. Sinister is linked to the generation of Xavier’s father (which will become a bigger deal much later in the series). 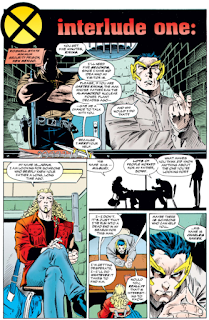 Xavier says the data lost when his Ready Room was destroyed in Uncanny #316 pertained to mutants he discovered who wished to remain anonymous, as well as human members of his Mutant Underground, which is why he never backed up the data.

He proceeds to suggest that Commcast, from the Deadpool mini, may posses it, but nothing ever comes of this (or, really, the loss of the data in the first place).

In another interlude, a still-comatose Legion has a vision of Destiny, planting the seeds of Legion’s actions in “Legion Quest” and introducing the crystal mindscape that will be a visual motif in that story and into “Age of Apocalypse” 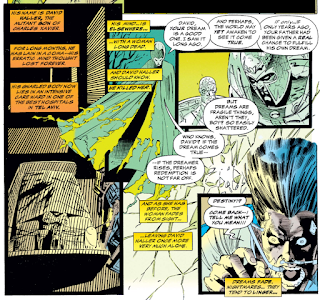 Sabretooth taunts Gambit, asking if he’s worried he’ll reveal something more sinister, a tease at the new mystery that will drive a wedge between Rogue & Gambit post “AoA” (and which will eventually turn out to be a reference to the time Sinister paid Gambit to assemble the Marauders and lead them into the Morlock tunnels).

Two individuals receive special thanks for "research assistance" credits in this issue; I assume they helped out with Beast's virus-related dialogue.

A Work in Progress
Beast has determined that the Legacy Virus has mutated into three different strains, which may be an attempt to explain the different manifestations of the virus (lesions/no lesions, power flairs, humans infected, etc.).

Iceman gets blown off my Beast, despite saying he needs someone to talk to at the moment, continuing his recent angst from Uncanny #318.

He also mopes about it to Rogue (who rightly points out she has plenty of experience with voices in her head). 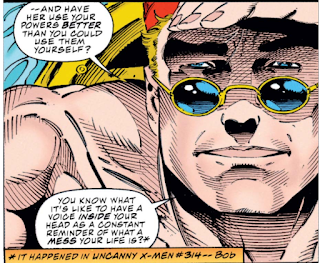 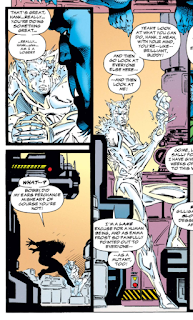 Psylocke blames her long flirtation with Cyclops earlier in the series on the influence of Kwannon (given that the retcon is that Psylocke’s mind has been a mix of both her & Kwannon since the transformation, it’s hard to rationalize that). 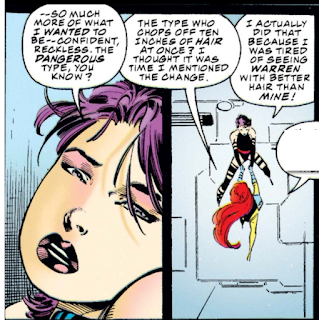 Artistic Achievements
I ranted about my issues with the deluxe format in my review of Uncanny #318, but I do have to admit, it does serve the art well. Wolverine #87 looked especially good, as does this issue (such as this splash). 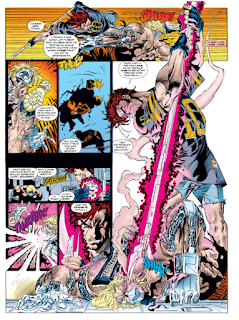 The Reference Section
At one point during his research, Beast cries out, “Yes, I am, Dr. Galakiewicz!”, a reference to a Bud Light commercial from around the time this was published.

Austin's Analysis
This is ostensibly a Patented Post-Crossover issue (coming, as it does, after a crossover, and with a focus on breath-catching characterization), but it's not quite a Lobdellian Patented Post-Crossover issue; aside from lacking Scott Lobdell as the writer, it also lacks the kind of emotional throughline that characterize his best such efforts (even the less-memorable Uncanny #318 had, at its core, the departure of Jubilee). Instead, Nicieza goes for a "day in the life" approach, presenting a series of 2-3 page vignettes centered on one particular character (along with a couple interludes teasing the events of the next three issues, before the series enters the "Age of Apocalypse").

What works about it is the way the characters (culled from both the Blue & Gold teams, further underlining the end of that distinction in the process) weave in and out of each other's vignettes, making the whole thing feel fuller and reach more like a cohesive story, rather than a collection of otherwise standalone pieces. In that regard, this almost reads like a Classic Claremont Quiet issue, but thanks to the more formal structure and the feeling - sold most effectively by the bookend scenes involving Xavier, Cyclops & Phoenix - of being a pivot point between what was and what is coming, it's really it's own thing entirely.

Next Issue
Tomorrow, X-Force gets a new headquarters in X-Force #40. Friday, Excalibur gets a writer in Excalibur #83. Next week, at long last, Generation X #1!