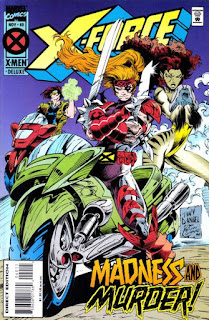 In a Nutshell
Thornn is arrested as X-Force moves into a new base.

Plot
In the tunnels beneath Manhattan, Detective Hidalgo arrests Thornn for the murder of her family, murders she insists she didn't commit. Elsewhere, Domino introduces the rest of X-Force to their new headquarters: Arcade's abandoned Murderworld. Outside Hidalgo's Bronx precinct, protesters gather, stoked by the Friends of Humanity, and at X-Force's base, Cable reveals Thornn has contacted him for help. Cable, acting as Thornn's lawyer, convinces her to tell him what really happened to her family, and then convinces Hidalgo to help expose that truth. He arranges for Thornn to be transferred to Ryker's Island, and when her transport is commandeered by the Friends of Humanity, X-Force intervenes, rescuing Thornn. Along with Hidalgo, they return to Thornn's abandoned childhood home in the Bronx, where they find Feral waiting for them.

Firsts and Other Notables
X-Force moves into their new headquarters in this issue, Arcade's old Murderworld facility underneath the outskirts of New York City (this would be the same facility where the X-Men were taken the first time Arcade kidnapped them in X-Men #123-124), continuing their tradition, after their initial Sentinel base in the Adirondacks, of taking over old the facilities of villains. Their stint in Murderworld will prove to be short-lived, however, as incoming series writer Jeph Loeb will move the team back into the X-mansion after "Age of Apocalypse" and give them a new status quo working, essentially, as an adjunct X-Men team. 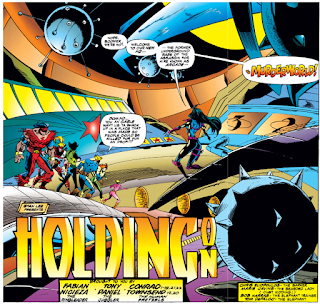 As one of the benefits of their new base, Domino cites its proximity to New York City and the opportunity for X-Force to have lives outside the team (Siryn mentions getting a job at a nearby flower shop, and the idea of attending college & Mets games is later brought up). This seems very much like intentionally-vague setup for future stories, but nothing really comes of it, due, again to the post-"AoA" shift in writers. 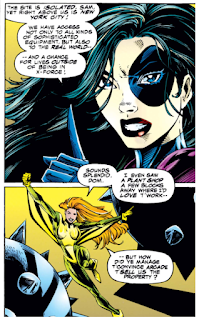 This issue also kicks off a two-part story which delves into the past of Feral & Thornn, in the process essentially cementing Feral (after having already defected to the Mutant Liberation Front) as the villainous sister and Thornn as the sympathetic, misunderstood one.

Cable references an “outside contact” who arranges for Feral to show up at her abandoned family home; this will turn out to be Moonstar.

In a neat (and increasingly rare) bit of the X-Men connecting to the larger Marvel Universe, Detective Hidalgo is assisted in his capture of Thornn by members of Code:Blue, the NYPD task force charged with dealing with superhuman crimes from Tom DeFalco’s Thor run. 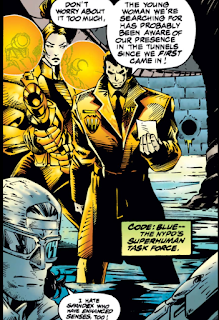 A Work in Progress
Hidalgo is able to pick up Thornn’s trail following her appearance in Cable #15.

Grayson Creed appears briefly, pleased with the efforts of Friends of Humanity protesting outside the police station.

Cannonball is understandably reluctant to help Feral (and Thornn), thanks to the time Feral gutted him for no good reason in issue #2.

The attack on the World Trade Center from issues #3-4 is said to have occurred “months ago”.

The Cable Guy
We get another great “Cable in a suit” and “Cable turns out to be surprisingly sophisticated & well-educated” moment when he reveals he’s licensed to practice law in New York, having attended Harvard & passed the state bar ( note his license lists Summers as his last name). 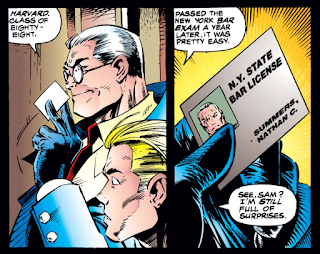 Austin's Analysis
Knowing what's coming a few months down the road, it's hard to read this issue and not feel bad for Fabian Nicieza. Everything involving X-Force up until Cable & Sam walk into the precinct holding Thornn is clearly designed to set up a new status quo for the team, with a new headquarters, home town, and the seeds of new storytelling possibilities in the form of potential jobs & schools & happenings, and so little of it ever comes to fruition thanks to the post "Age of Apocalypse" creator shuffle. I don't know when, exactly, Nicieza decided (or was asked) to leave the series, but I have to believe it was at some point after completing this issue, because otherwise, there's no way he'd devote so much time to establishing a new status quo if he knew he wasn't going to be able follow through on it.

All that aside, this issue kicks off a story that once again shows Nicieza's aptitude for little two-parters (following #28-29 and #35-36), in which the first chapter sets up the narrative pins, and the second one knocks them all down. Here, we've got Thornn getting arrested, drawing X-Force & Feral together for the first time since the latter left the former to throw in with their archenemies. It's a story structure that, even at this time, was rare, but Nicieza seems to have taken a shine to it, and as with his previous such endeavors, deploys it well.