Force in Focus: Return of the Jedi #4 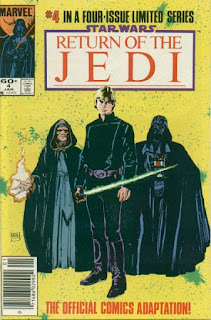 In a Nutshell
The Rebels destroy the second Death Star as Darth Vader turns against the Emperor.

Plot
As the Rebel fleet arrives at the Death Star, Han's team of Rebels penetrate the shield generator bunker & Luke is brought before the Emperor, who revels he has orchestrated recent events to lead the Rebels into a trap. Outside, the Death Star begins targeting Rebel ships, while on Endor, Han's team is captured, prompting Luke to strike at the Emperor in anger. But Darth Vader stops him, and the two begin to duel. On Endor, the Ewoks mount a counter attack, allowing the Rebels to escape and get back inside the bunker to set charges. As the Rebel fleet holds its own against the Empire's ships, Luke gives in to his anger and overpowers Vader, cutting off his hand. Realizing he's becoming Vader, Luke tosses away his lightsaber, declaring he's a Jedi, like his father before him. The Emperor responds by blasting him with Force lightning, but the sight of his son in pain moves Vader into action, and he tosses the Emperor down a nearby shaft, killing him. Just then, the Rebels on Endor destroy the shield generator, allowing Lando to lead a group of fighters into the Death Star to destroy it. Aboard the Death Star, Luke removes Vader's helmet and says goodbye to his dying father, then escapes just as the station explodes. Luke returns to Endor, where he is reunited with his triumphant friends.

Firsts and Other Notables
Darth Vader and the Emperor both die in this issue, and with the latter, the Empire largely dies with him (though it remains to be seen how this series deals with the remnants of the Empire in the wake of the Rebellion's victory, something similarly dealt with in the later Expanded Universe and current canon). 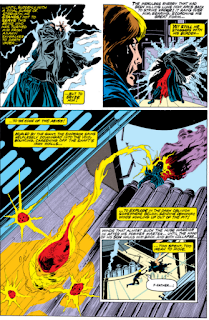 Wicket sort of makes his first appearance, referenced as the Ewok who befriended Princess Leia, but also credited as being the Ewok who leads the Imperials away from the bunker via speeder bike (as drawn, it looks nothing like Wicket and is clearly another Ewok).

Lando's co-pilot Nien Nunb, a character with a surprisingly long if largely undeveloped shelf-life (he appears as a pilot in Force Awakens), appears for the first time in this issue. 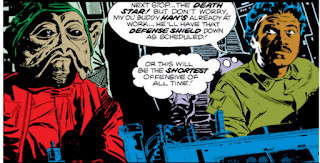 The Force ghosts of Anakin, Obi-Wan & Yoda which visit Luke aren’t shown (presumably because the creators didn't know how to draw Anakin), but they do appear in one of the pinups. 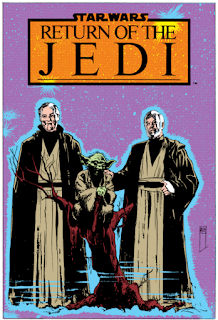 Another pinup does a lot to sell the concept of the Ewoks as vicious murder bears. 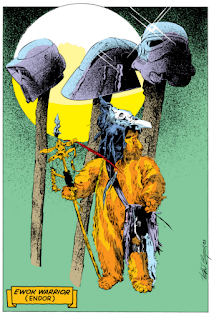 The title page illustration features a clash of lightsabers. 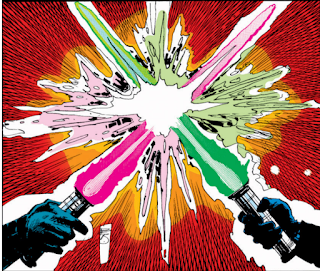 A Work in Progress
Lando points out that Wedge survived the first Death Star attack (one of my favorite little in-universe tidbits is the fact that Wedge is the only pilot to have survived an attack on both Death Stars). 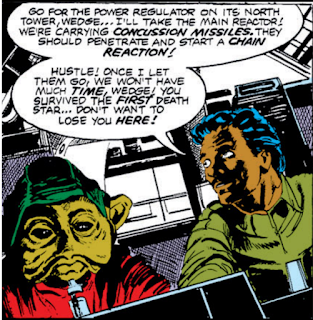 Artistic Achievements
It’s not the most well-drawn splash, but Luke and Vader’s duel is certainly worthy of getting the token splash page in this issue. 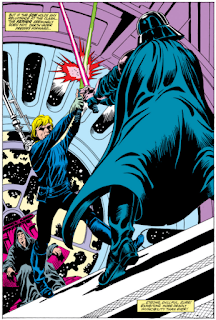 There’s a great depiction of the space battle in one panel, with the Falcon flying underneath a Star Destroyer.

Um, Actually
In taunting Luke, the Emperor says he’s given orders that should the shield generator on Endor fall, the Death Star is to destroy the moon; this is a reference to a subplot cut from the final film, which would have involved Moff Jerjerrod struggling with the order, as it involves destroying all the Imperials on the moon.

The Luke/Vader duel is of course staged differently, most notably (for me, because I love how it’s done in the film) the scene in which Vader learns about Leia, which is significantly less dramatic here. 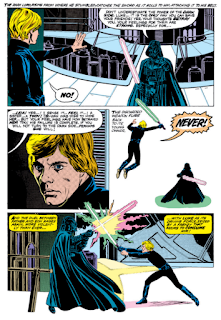 After Luke cuts off Vader’s hand, a narrative caption spells out exactly what Like is thinking, something the film did without any dialogue. 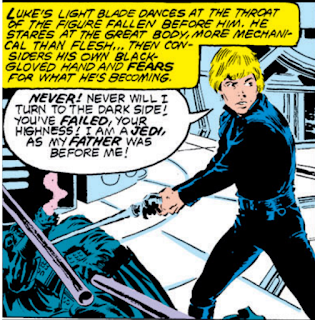 Luke looks upon Vader’s unmasked face, but it is not shown to readers (again, presumably because the creators hadn't yet seen a final cut of the film and thus didn't know what he'd look like). 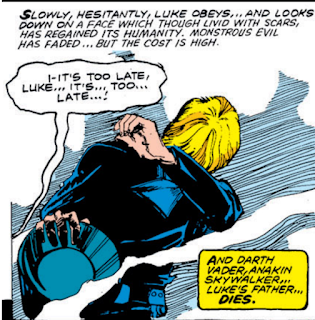 Austin's Analysis
More than any other issue of the series, this one suffers the most from the decision to adapt the film in four issues instead of six. The Battle of Endor climax of Jedi is a masterpiece, toggling between three different narratives, at various times paralleling & contrasting the rising & falling action between the narratives, all building to a triumphant conclusion. Cramming essentially the last third of the film into one issue does it no favors, and while Goodwin & company manage to hit all the beats of the climax (the shield is disabled, Vader turns on the Emperor, the Death Star is destroyed, etc.), it's all depicted in a fairly perfunctory manner, with little of the panache or drama of the film.

Which, in turns, speaks to the larger problems of this miniseries on the whole. Marvel made a few curious decisions with the way it handled this adaptation (assuming it was allowed to make these decisions and they weren't handed down by LucasFilm). First, it released it as a miniseries, independent of the action of the "main" comic book series (as opposed to the previous two film adaptations, which launched and continued that series). Second, it brought back the creative team of the Empire adaptation, rather than letting the series' regular creative team tackle the project (there's a chicken-or-the-egg scenario here as to which came first, the decision to bring back the Empire creative team - and thus do it as a separate book - or the desire to make it a miniseries, and thus needing a second creative team to handle it). Third, it shortened the scope of the adaptation from six issues to four.

Of course, all these decisions were financially motivated: a miniseries means two Star Wars books on shelves during the summer months when the movie is most in the zeitgeist, and bringing back the acclaimed creative team of the Empire adaptation minimizes risk. And, of course, a four issues series instead of six means Marvel is paying that creative team less. But while undoubtedly smart financial decisions, they leave this adaptation in a somewhat precarious position in terms of quality. In a vacuum, the creative team does fine work, but like with the Empire adaptation, the sudden shift away from the regular creative team makes the story feel more like it's own thing, rather than the next adventure in the lives of the Star Warriors being depicted every month in the comic, while the shift to a limited series format only exacerbates that feeling (Empire, at least, unfolded as part of the main book). And as this issue attests, capping the series at four cuts it short, a sensation most acutely felt in the story's climax.

Ultimately, it's a perfectly fine adaption. Read alone (or in concert with the other two film adaptations), as it likely most often is these days, it works well enough, albeit with a somewhat by-the-numbers climax lacking in a lot of drama, and Marvel was likely perfectly happy with that. But as a continuation/part of the larger, ongoing comic book series, it feels like an outlier, something happening in an alternate universe to characters like the main characters, but different from them, rather than as the culmination of ongoing plot threads & a significant shift in the narrative of the main book that it really should be.

Next Issue
Lando trots out the Drebble alias to locate Han once and for all in Star Wars #79!