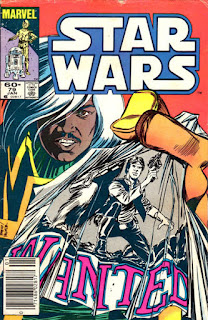 In a Nutshell
Lando & Chewbacca go undercover to discover the final location of Han Solo.

Plot
Lando & Chewbacca, looking for information on Han's whereabouts, arrive on Arcan IV to meet with a gang led by Lemo & Sanda, who had previous dealings with Han. Aware that the gang is hunting for a pair of relics, the Dancing Goddess & the Minstrel, Lando sells them the idea that Han is an accomplished treasure hunter who can help them, if they in turn can locate Han. The gang invites Lando to dinner, planning to find out what he knows about the relics, then kill him. At dinner, they get him drunk, but also let slip that Han will soon be arriving at Jabba's palace. However, the intoxicated Lando accidentally blows his and Chewbacca's cover, leading to a speeder chase that culminates in Dafi, one of Lemo & Sanda's gang, spotting the Minstrel in Lando's possession. Claiming it for herself, she turns on the rest of the gang when they arrive, and in the ensuing confusion, Lando & Chewbacca return to their ship, pleased to have finally located Han, and as they leave the planet, Lando wonders what the gang would have done had they known he also possessed the Dancing Goddess all along.

Firsts and Other Notables
Lando & Chewie learn that Han is being held by Jabba at his palace on Tatooine in this issue, setting up the Star Warriors' rescue mission at the start of Return of the Jedi.

Lando also mentions that he and Chewie checked out Jabba’s palace immediately after Empire, but that Boba Fett apparently hadn’t delivered Han yet, presumably an explanation for why Empire ended with Lando saying he’d meet Luke on Tatooine, then everyone proceeded to spend the next forty-odd issues looking for Han before, indeed, reuniting on Tatooine to rescue him. 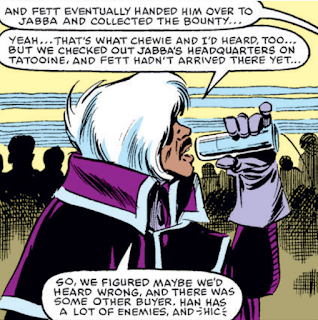 Citing events on Stenos (in issue #70), Lando, as Drebble, sells the idea that Han is accomplished at finding lost historical artifacts, which may be a wink on Duffy’s part at the other LucasFilm hero played by Harrison Ford. 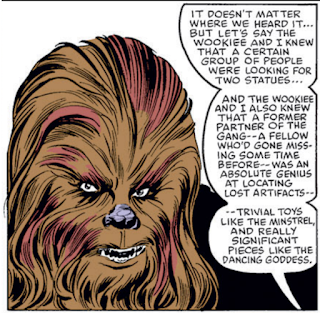 A Work in Progress
Lando uses his Drebble alias for the second time this issue, this time with an accompanying wig of white hair and a Prince costume. 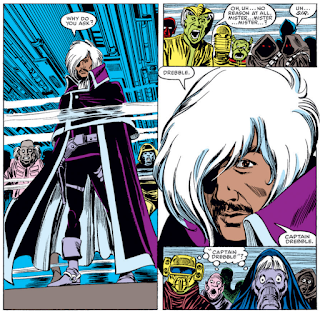 He also explains to Chewbacca why he keeps using the Drebble alias. 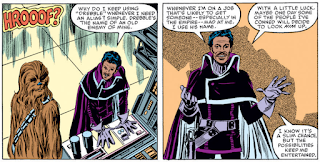 It's said in this issue that the bounty Jabba put on Jabba's head was 100,000 credits.

Austin's Analysis
While this issue represents an opportunity for the series to fill-in a piece of the narrative ahead of Return of the Jedi (something it rarely gets to do) by bridging the gap between Lando & Chewie heading out to locate Han at the end of Empire and the start of Luke's oddly-executed rescue mission in Jedi, it also represents something of a last hurrah for the Lando/Chewie partnership, and the role of Lando as the rakish, morally-dubious member of the group. With Han poised to return to the series in two issue's time (with readers having already seen him return in Return of the Jedi at this point), Lando will be forced to find a new role within the group dynamic as Han resumes his place as the worldly realist with a heart of gold in the central Luke/Han/Leia trio.

For the most part, Lando has filled that role ably, keeping the spirit of the type of character Han represented alive while also bringing his own unique flair to things (with Lando being much more of a conman more prone to talk himself out of trouble than blast his way out - and more willing to play dress-up, as he does here & in Return of the Jedi - than Han). As such, this issue is a suitable swan song for the character, as Lando (once again using his Drebble alias to screw over an old enemy) & Chewie con a group of smugglers into giving up the location of the frozen Han amidst a series of wacky hijinks. In doing so, it very much highlights what made Lando a character both similar to and different than Han Solo. Lando isn't going anywhere (he'll remain a part of the series moving forward), but the spotlight he's received in the years between Empire & Jedi will dim a bit after this. Thankfully, he makes the most of his last moment in the spotlight.

Next Issue
The "Search for Tay Vanis" comes to a close.