Force in Focus: Return of the Jedi #3 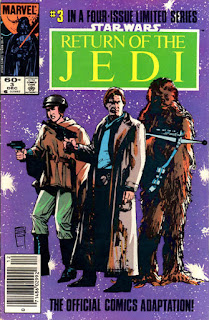 In a Nutshell
The Rebels arrive on Endor in order to destroy the protective force field around the Death Star.

Plot
At a fleet gathering, Mon Mothma, Admiral Ackbar & General Madine brief the Rebels on the plan to destroy the new Death Star, including the fact that Han has been chosen to lead the mission to neutralize the shield protecting the Death Star & that Lando is leading the attack on the station itself. Just then, Luke returns, and offers to join Han's team. Later, Han's team arrives on Endor, and gets split up when they encounter a group of Imperial Scout troops, with Luke & Leia giving chase when they speed off. During the chase, Luke & Leia are separated, with Luke returning just in time to be captured by the native Ewoks. Believing Threepio to be one of their gods, the Ewoks bring the Rebels to their village, where they are reunited with Leia. After Luke uses the Force to make Threepio appear to have god-like powers, the Ewoks release the Rebels & agree to help them. That evening, Luke tells Leia that Darth Vader is his father, and that she is Luke's sister, then leaves the Rebels, allowing himself to be captured & brought to a waiting Vader. Luke insists he can sense conflict in Vader, but Vader tells Luke he's being brought to the Emperor, prompting Luke to admit that his father is truly dead.

Firsts and Other Notables
Lots more first appearances in this issus: both Mon Mothma (who has blue/black hair instead of strawberry blond) and Admiral Acrobat appear for the first time, as does Rebel General Madine also appears for the first time. Of the three, Ackbar & Mon Mothma will have the larger recurring presence in the comic book series following this adaptation. 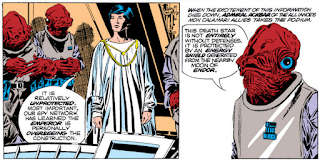 The Imperial Scout/Biker troops (and their speeder bikes), one of the more cooler Stormtrooper variations in terms of design, appear for the first time in this issue. 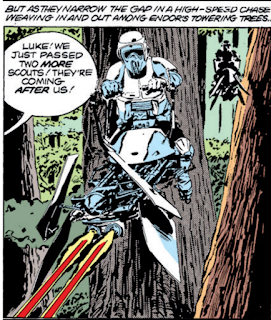 Perhaps most notably, this issue introduces the Ewoks to the series. Certainly divisive amongst fans, the Ewoks were nevertheless the breakout stars of the film from a marketing/merchandising/licensing perspective, and will be featured both in the regular comic book series, as well as receive their own series as part of Marvel's juvenile Star Comics imprint (which will technically be a tie-in to the post-Jedi Ewoks animated series). 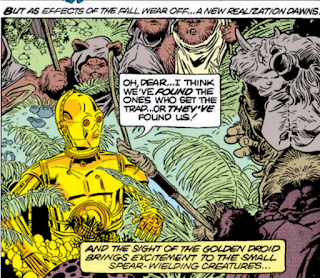 Leia’s encounter with Wicket isn’t depicted (but it is referenced), which is funny considering Wicket will be the star of that later Ewoks series (as well as a pair of made-for-TV movies which represent the zenith of LucasFilm's post-Jedi, pre-Special Edition Star Wars output).

Leia also calls the Ewoks as such, something which doesn’t happen in the film (during which the name “Ewok” is never used).

Leia learns that Luke is her brother, and Vader her father, in this issue (the scene Han being all jealous of Luke & Leia is omitted); hopefully, this will put a stop to the awkward Luke/Leia/Han love triangle moments that still pop up in the main series from time-to-time once and for all.

As in the movie, Vader notes that Luke has constructed a new lightsaber (despite the fact that Luke has been using a lightsaber in the main series despite having “lost” it in Empire, because Marvel was lazy), which is incorrectly colored with a red blade here (and Vader is also holding it upside down in this panel). 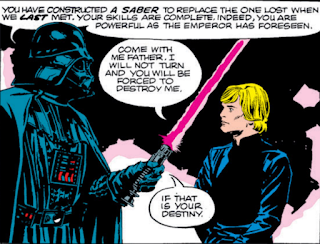 The issue opens, as the others, with a title page featuring a Bill Sienkiewicz image. 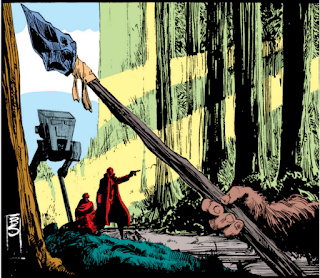 And of course it closes with a series of pinups, including one featuring the new TIE Interceptors, which haven’t appeared in the story itself yet. 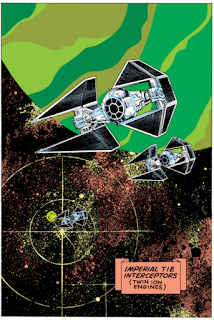 A Work in Progress
In a bit of dialogue that doesn’t appear in the film, Han teases Lando about signing up to lead the attack on the Death Star. 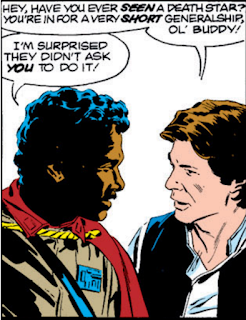 Leia calls Han your “generalship” upon learning about his promotion. 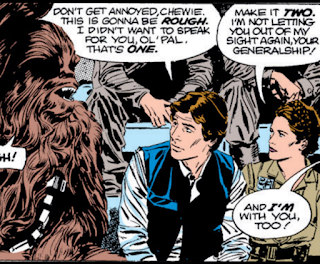 Han offering to let Lando take the Falcon for the attack on the Death Star reads a lot differently after having read 40ish issues in which Lando was flying around in the Falcon in Han’s place. 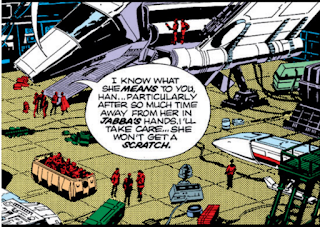 Artistic Achievements
Of all the things to depict via a full page splash, Han decking an Imperial Scout trooper seems an odd choice. 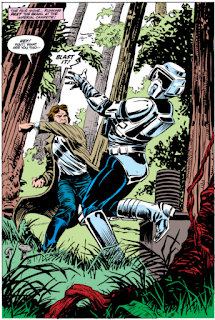 Austin's Analysis
This issue features some of the most significant cuts from the film (aside from issue #2's odd choice to not make it clear that Yoda died), as Leia's entire encounter with Wicket is excised, thus cutting eliminating from the adaptation one of the characters who will go on to become one of the most significant characters in the nascent post-Jedi Expanded Universe. It seems doubtful this was a case of Goodwin working off an outdated script (as otherwise Leia showing up at the Ewok village comes off less suprising than it does nonsensical), but more likely was born of his desire to get all the pre-climax Endor material into one issue and end on the cliffhanger of Luke surrending to Vader. After all, Goodwin had no way of knowing the unnamed Ewok who befriended Leia would go on to headling a comic book, animated series and two TV movies in the aftermath of the film.

Next Issue
We find out what happened to Biggs Wedge in Star Wars #78.