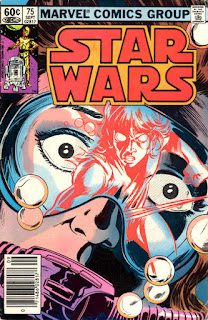 Plot
A revived Kendle seemingly leads Luke & Leia out of the underwater wreckage of Pavilion, but she abandons them when confronted by Kiro, a fellow native of Iskalon. Elsewhere, Lando, Chewbacca, Mone & the droids arrive on Gamandar. As Artoo goes off on his own, Lando, posing as a war profiteer by the name of Drebble, leads the rest of the group to a meeting with Admiral Tower. Though Tower plays along, unbeknowst to the Rebels, he is well aware of who they really are, thanks to a spy on Iskalon. Later, under the cover of looking for droids to resell at profit, Lando and the rebels seemingly discover Tay Vanis' former droid, K-3PX. Back on Iskalon, Kiro leads Luke & Leia to the surface, where he reveals that Kendle betrayed them to the Empire - he overheard her contacting Admiral Tower. Luke realizes what this means for their friends on Gamandar who, sure enough, are now imprisoned in an Imperial cell.

Firsts and Other Notables
This issue marks the first appearance of Kiro, a native of Iskalon (later dubbed the Chuhkyvi species, here simply called Iskalons) who will become a recurring character in the series, eventually becoming Luke's first Jedi apprentice as well as a love interest for Dani. 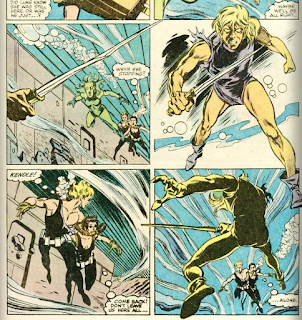 Mone’s father Primor dies this issue, and it's also revealed that Mone’s wife Kendle is the traitor who alerted the Empire to the presence of the Rebels on Iskalon, prompting their attack in the previous issue and their capture of Lando, Chewie, Threepio & Mone in this one. 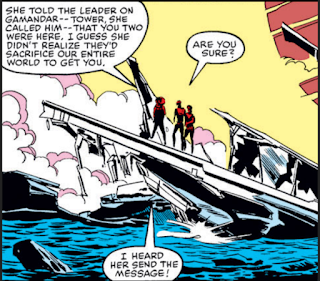 The droid K-3PX alaso appears for the first time; the Rebels believe him to be Tay Vanis' droid partner, but in fact, K-3PX will turn out to be a spy loyal to Darth Vader (for what it's worth, in this issue, the droid's name is spelled "K3PX"; I've added the hyphen commonly used in droid names, which is how the droid is listed in the Star Wars Encyclopedia). 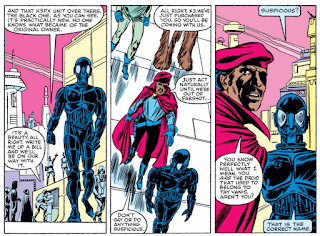 This issue marks the first time Lando uses the Drebble alias, which will eventually result in the real Drebble being honored by the Rebel Alliance. 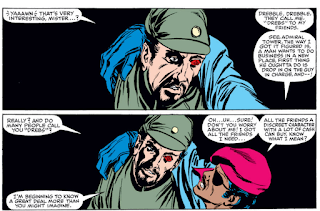 With direct Darth Vader appearances few & far between, Darth Vader pops up as a hologram when it’s revealed he orchestrated the subjugation of Gamandar and the construction of the Imperial fortress there. 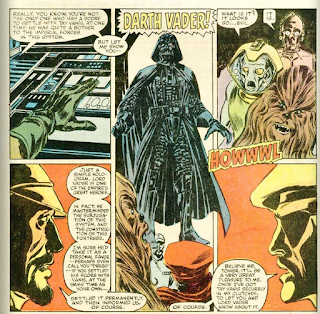 Somewhat ridiculously, the Rebels use the name Millennium Falcon for their ship when infiltrating Gamandar; granted, Lando has a whole cover story worked out about the ship was sold to Mone who has thrown in with "Drebble" and his war profiteers, but given how infamous the Falcon would have to be throughout the Empire, it seems like it would be smarter to just use a different name altogether.

This issue was the issue on sale when Return of the Jedi was first released in theaters.

A Work in Progress
Luke notes that his Jedi training gives him heightened breathing abilities (at least, he somewhat condescendingly thinks, compared to Leia).

Threepio’s translation ability is actually depicted really well, as he helps explain the concepts of secrecy & subterfuge to Mone. 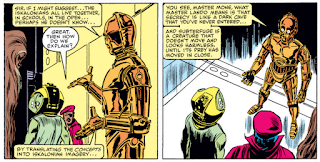 The "3P" designation in Threepio & K-3PX’s names is said to indicate the pair are part of the same series.

Luke, despite having just learned how to swim (at least according to last issue), is shown to be a more capable swimmer than Leia, helping guide her to the surface after they escape from the wreckage of Pavilion. 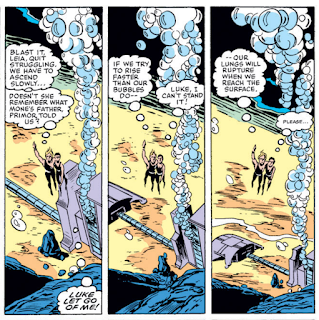 Austin's Analysis
While Duffy still seems to have a dicey grasp of Leia (she once again comes off as particularly damsel-y in this issue; Jedi powers or not, it seems strange that "Desert Boy" Luke is the one doing all the underwater rescuing, especially after the previous issue made such a big deal about him not previously knowing how to swim), the economy of her plotting in this one is really effective. Most of the beats on the Lando side of things happen off-panel: the plan to pose as black market droid dealers, the fact that there's a second Imperial spy on Iskalon, and the subsequent capture of Lando, Chewie, etc. all happen off-panel, which makes it all the more shocking when the issue ends on the reveal of the traitor and the capture of the heroes. There's plenty of other stuff happening in the issue, so the telling-instead-of-showing of it all isn't a problem, and the end result is a structure that is both refreshingly different, and which maximizes the dual surprises of the ending.