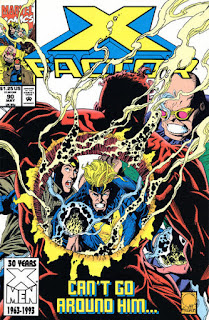 In a Nutshell
X-Factor learns of a new threat in Genosha.

Plot
Wolfsbane attacks Polaris, angry upon learning the way her mind has been tampered with, but Polaris manages to calm her down by calling on her own experiences with mind control. Elsewhere, Havok, upon learning of the Genoshan government's continued manipulation of the Mutates, battles the President's mutate bodyguard, until the President agrees to show X-Factor the truth behind the current Genoshan situation. Over the Genegineer's objections, the President proceeds to take X-Factor to an abandoned hospital where doctors, including Moira MacTaggert, have been secretly working to fight a disease targeting mutants, to which the Mutates are especially susceptible. As they discuss the situation, one of the Mutates, not wanting to die in the hospital, escapes into the tunnels beneath the building. The President orders the Magistrates to find and kill him, but Havok interjects, declaring that X-Factor will track him down and bring him back alive.

Firsts and Other Notables
Scott Lobdell takes over as the series' writer with this issue, though his involvement was, presumably, always meant to be temporary; he writes this issue and the next, then hands over scripting duties to J.M. DeMatteis with issue #92, remaining on solely with a plotting credit through issue #95 (after which DeMatteis takes over fully).

Joe Quesada pencils about half of this issue, with Buzz (real name: Alrdin Aw) taking over to finish it out, the third consecutive issue Quesada hasn't pencilled in full (though at least the previous two featured a more formal break in the form of the Quicksilver/Crystal story).

This issue reveals that the Legacy Virus (still not called that directly on-panel) has reached Genosha, and is particularly active amongst the Mutates (due to their already-unstable genetics), functioning as a full-on plague. It's also said that Moira has been working with the Genoshan government to study and attempt to treat the virus, experiences referenced in Uncanny X-Men #300's second story. 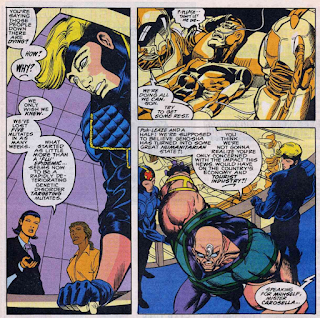 Moira leaves Genosha this issue to rendezvous with the X-Men (with her capture by the Acolytes happening off-panel between this issue and Uncanny #300), and her treatment of Rahne in doing so is particularly out-of-character - she insists that the larger issue of the Legacy Virus and the Acolytes outweight Rahne's problems at the moment, and while that may be true, she makes this argument in the most dispassionate and cold way, which rings especially false given how eager she was to help Rahne deal with her problems in the previous issue. 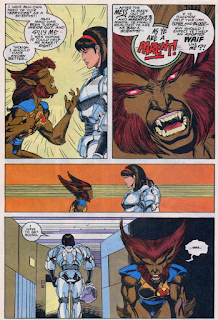 Havok battles a mutate named Piecemeal this issue, his first and only appearance.

A Work in Progress
In a neat trick, Polaris' new costume is shown to be at least in part metallic, as she's able to use it to deflect Rahne's physical attack. 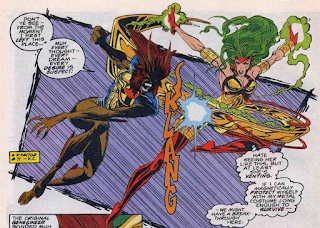 Polaris calls on her own history of mental control.manipulation to break through to Rahne, pointing out her stints as a thrall of Mesmero, Erik the Red, and Malice. 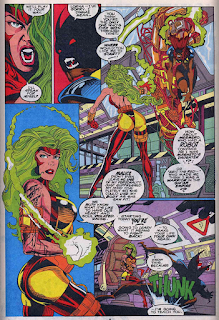 The "Evil Val" subplot continues, with Val turning down Quicksilver's offer to join the team in Genosha now that his reconciliation with Crystal has failed, then raging at Madrox for almost contradicting her. 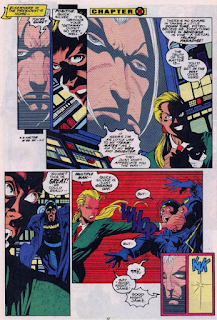 It's said that in the wake of "X-Tinction Agenda" (called "Extinction Agenda" by the Genoshan president, which, it seems odd they'd use the title of the story as a label in-universe), a UN council enforced some kind of regulations on Genosha.

X-Factor plays along with Moira, downplaying Xavier's connection to the team, which Havok's thoughts helpfully explain to any confused readers. 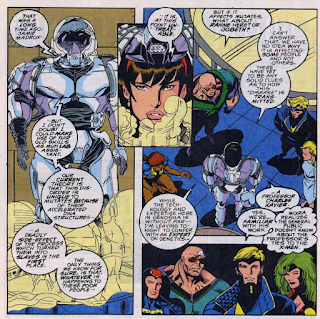 Austin's Analysis
With Peter David gone, Scott Lobdell steps in to shepherd the title for a bit, and for the most part, he does a pretty good job of following in David's shoes, at least in terms of dialogue and characterization, peppering the script with a reasonable approximation of David's banter, and making a smart connection between the recent revelation involving Rahne's obsession with Havok and Polaris' own (long) history of mental manipulation. This series will never again be quite as funny (or punny), nor as character-driven, as it was under David, but Lobdell helps effectively smooths the transition here.

But plot-wise, he takes a sharp turn away from whatever David was building towards in the team's visit to Genosha, effectively ending the X-Patriots storyline (they are mentioned, but don't appear, and won't ever again) and turning X-Factor's trip into a way to build up the larger Legacy Virus storyline unfolding in Lobdell's other titles. It's a little sloppily-executed (Moira disappears from wherever Wolsfbane & Polaris are between issues, only to turn up again at the end of the issue to act hideously out of character), but it's not a bad turn, certainly (the X-Patriots were largely duds of characters anyway, with the best stuff to come out of this Genosha trip in the first place tied to Havok & Wolfsbane). It does, however, mark a shift in the series. While never quite as isolated from the other X-books as, say, Excalibur, this book has nevertheless stood somewhat apart, in terms of tone and - "X-Cutioner's Song" and MLF-appearances aside - plot since the relaunch. With David's departure and Lobdell stepping in as plotter (along with another crossover event looming), for better and worse (and it really is a little of both), that mostly ends here.