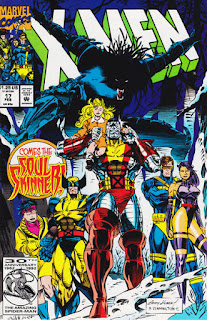 "A Skinning of Souls Part One: Waiting for the Ripening"
February 1993

In a Nutshell
The X-Men go to Russia to visit Colossus' family.

Plot
Illyana Rasputin, excited about the imminent return home of her brother, is unknowingly watched by a Russian agent, Flagwatch #133. In the town of Neftelensk, Darkstar and Alexi Garnoff investigate the strange occurrence of everyone in the town having been mentally "turned off", but fall prey themselves to the unseen assailant. In Red Square, in the wake of Darkstar and Garnoff's loss, Colonel Vazhin agrees to acquire the help of Omega Red. Days later, the X-Men arrive at Colossus' family farm, an event which Flagwatch #133 reports to Vazhin. At the X-Mansion, Cannonball & Warpath plead with Xavier to let them go to Nova Roma, while in Tokyo, a woman with purple hair defeats a group of street thugs, declaring that it is time for revenge, and to find the X-Men. In Russia, Colonel Vazhin argues against using Red Flag #133 to stop the Neftelensk incursion even though Omega Red has been missing for 48 hours; instead, he's going to use the X-Men.

Firsts and Other Notables
This issue kicks off the three part "A Skinning of Souls" story (aka the next chapter of the "Let's Crap All Over Colossus"saga ), which introduces the Soul Skinner and features Omega Red, though neither appears in this issue (though the former appears, in shadows, on the cover).

Though unidentified here, Revanche/Kwannon makes her first appearance in this issue, ahead of her full debut in X-Men #20. 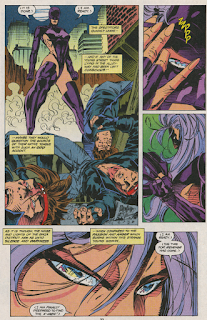 This issue marks the return of Illyana Rasputin, making her first appearance since being de-aged and returned to her parents following "Inferno". She will remain a regular presence in the X-books for the next several months, leading up to her eventual death in Uncanny X-Men #303. 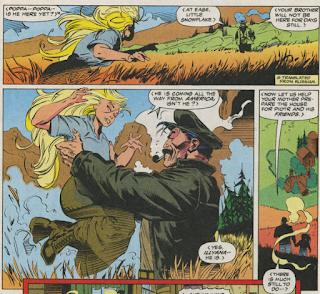 Beast attempts to speak with Xavier alone in this issue, but is overlooked in favor of more pressing events. This is, I believe, the beginning of the minor "Beast is suffering from malaise as his thirtieth birthday approaches" subplot, which is chiefly notable for establishing a hard age for one of the original X-Men at this point in time. 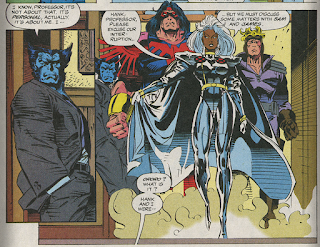 A pair of Russian mutants guest star, both former members of the Soviet Super Soldiers: Darkstar, one-time Champion and love interest for Iceman, as well as Father Alexi Garnoff aka Blind Faith, who first appeared in X-Factor Annual #1. 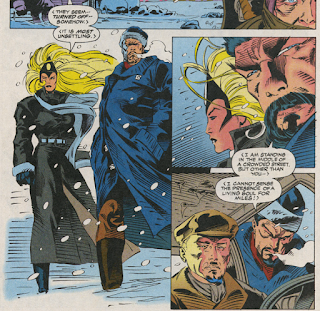 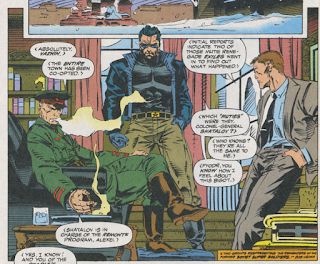 Collection Recollection
This issue is somewhat unique for me, as it represents a brief (literally one month) dialing back of my comic habit back in the day. Coming out of "X-Cutioner's Song", I was loving the X-books (the only comics I was really buying at the time), but was still also collecting baseball cards (and the various Marvel trading cards). My meager allowance was having a hard time supporting all that, so I decided, as much as I was digging the comics, that I didn't need to be buying TWO X-Men titles a month. So I decided to give up this series, and didn't purchase this issue off the stands.

My resolve held for approximately a month, as I ended up at the airport a few weeks later with my uncle, waiting for my parents to return from a trip. The little newsstand/convenience store near their arrival gate (this being back when non-ticketed passengers could still wait at gates) didn't have any baseball cards, but it did have X-Men #18, so I picked it up to pass the time, and I was back to being all-in on comics. From that point forward, comics took priority over baseball cards until that hobby quietly vanished for me, and I've purchased every issue of X-Men and Uncanny X-Men every month since, or at least until Marvel started muddying the water as far as which X-books were the "main" ones (and I did eventually purchase and read this issue after the fact).

The Chronology Corner
This story takes place after Wolverine #66-68, with the X-Men having picked up Wolverine at the end of that story on their way to visit Colossus' family.

It also takes place prior to X-Force #19, as X-Force are still under house arrest at the mansion, and before New Warriors #31, as it sets up Cannonball and Warpath's involvement in that issue.

A Work in Progress
As part of the dissolving of the Blue/Gold barriers, both Colossus & Iceman are featured in this issue, traveling to Russia alongside Blue team members Cyclops, Psylocke, Wolverine & Jubilee. The pair seem to be bonding in the wake of their discussion in Uncanny X-Men #294. 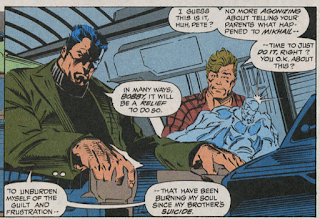 Rogue is still blind, and Gambit does his best to add to her trust issues. 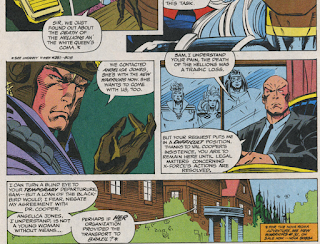 In the wake of Mikhail's death, Colossus finds himself wondering if leaving home to join the X-Men was the single worst choice of his life. 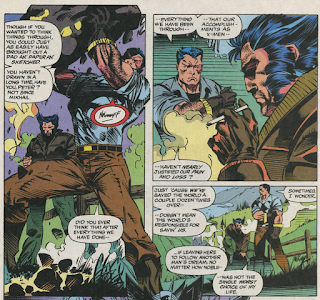 Jubilee gives Illyana some makeup tips, a nice moment given their later interactions. 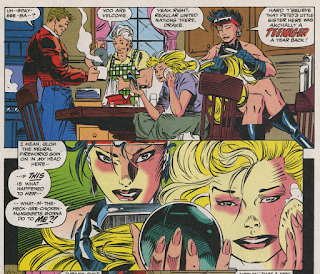 Young Love
The Cyclops/Psylocke flirtation subplot continues, both on the Blackbird en route to Russia, and later when Cyclops walks in on Psylocke emerging from the shower. 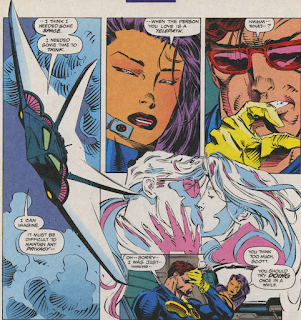 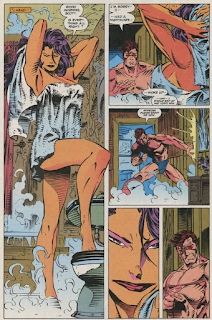 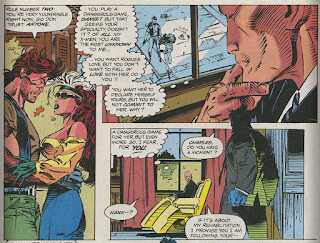 Claremontisms
An angsty Colossus takes out his frustrations not on a tree stump this time, but a stubborn root. 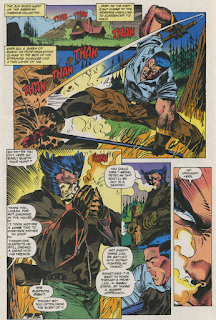 Austin's Analysis
I've never been a terribly big fan of the story that begins here. In part, that's because the central villain is kind of a dud, both in terms of the story and the fact that it represents his only appearance to date. It's also because this story is one of the crueler installments in the "Crap All Over Colossus" plotline, which we'll get to in due time. But ironically (given how I skipped over it back in the day), this is probably the strongest issue of the three-parter. It's not a proper epilogue to "X-Cutioner's Song", but it does address some of the fallout from that story, with Cyclops mourning the lack of answers about Cable & Stryfe as much as he's mourning Cable himself, and it checks in with the still-confined X-Force, helping set up the events of New Warriors #31. As a result, even as it does plenty of work setting up the immediate Soul Skinner story, it feels more of a piece with the epilogue issues running in the other series, and even something like a Classic Claremont Quiet Issue, than the next two issues, which deal more directly with the immediate plot of the story.

Next Issue
Tomorrow, the final "X-Cutioner's Song" epilogue in X-Force #19. Friday, the Warpies return in Excalibur #62. Next week, we look at the second and third series of X-Men action figures, and the second series of X-Force figures as I break for MSP ComiCon 2017!