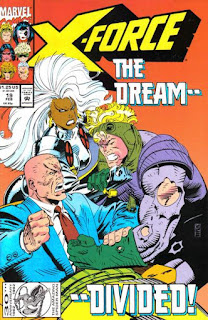 In a Nutshell
The post-Cable fate of X-Force is decided.

Plot
In the wake of creating a new costume for herself, Boomer receives Lila Cheney's blessing to pursue a relationship with Sam. As Roberto ruminates on recent events, Rictor, Feral & Shatterstar work out in the Danger Room while Warpath & Siryn steal some files for Xavier. Meanwhile, having returned from Nova Roma, Sam debates X-Force's continued existence and methods with Xavier. Elsewhere, Vanessa is checked on by her roommate, while Bridge is blamed for Weapon: Prime's failure to capture Cable, leading to him quitting SHIELD. Back at the X-Mansion, Boomer designs new costumes for the rest of the team, and Sam forces Xavier's hand, telling him it's time for X-Force to leave. He argues further with Xavier, illustrating that both their respective methods are capable of both doing harm and helping. Ultimately, Xavier concedes, declaring X-Force is free to decide their own destiny. As Lila teleports the team away, Xavier tells Sam about the theft of the files, telling him that is the path he's chosen, one of second guessing and moral comprises, then urges him to walk that path with care.

Firsts and Other Notables
X-Force is released from house arrest this issue, as Professor Xavier willingly turns a blind eye to their departure (and agrees to cover for them with Val Cooper and the government) after Cannonball convinces them their goals are not too dissimilar from Xavier's, and that they deserve the chance to make their own way.

Cannonball's argument comes down to an open hand, closed fist metaphor, with Xavier arguing that the path to human/mutant tolerance is via the open hand, rather than Cable's closed fist approach. Cannonball counters by showing Xavier how the open hand can also be used offensively (as he slaps Xavier), while the closed fist can also be used to protect (as he holds a small mouse in his fist), effectively arguing that the situation is more complicated than the simple dichotomy would suggest. 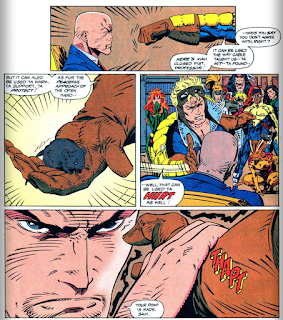 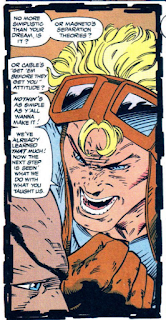 In the wake of receiving their freedom, X-Force dons new, Greg Capullo-designed costumes this issue. A few variations aside, these will remain their looks up through "Age of Apocalypse". Somehow, they manage to both tone down (the lack of shoulder pads) and ramp up (Boomer's got a TON of pouches now, and her name written on one of her legs) the 90s elements, though I've always had some affection for a lot of these looks (it helps that many of these characters' action figures feature these costumes). 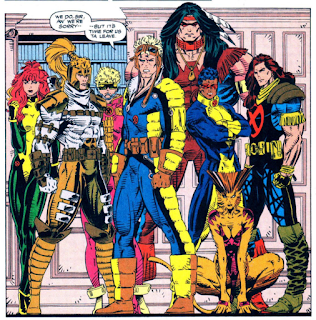 Though the name has been used casually off-and-on, this issue effectively marks the point at which Boom-Boom's codename is officially changed to Boomer (it is, after all, right there on her costume...). 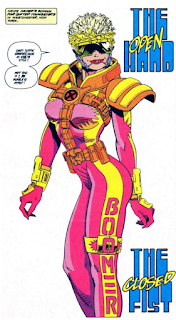 Setting up her continued involvement in the series (and throughout the X-line) Vanessa, Deadpool's girlfriend who impersonated Domino on Tolliver's orders, returns this issue, and we see a version of her true, non-Domino form. 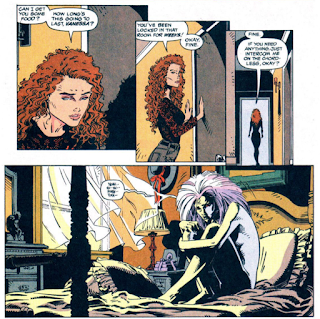 After having the blame for the failure of Weapon: Prime at his feet, Bridge quits SHIELD. 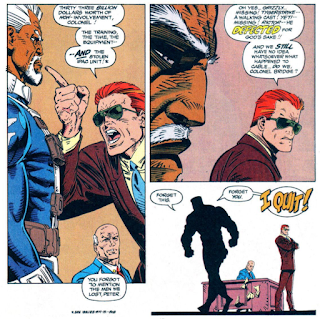 A Work in Progress
Roberto reminisces with Stevie Hunter (who is depicted correctly in this issue) about his New Mutants days and the changes wrought on him by Gideon. 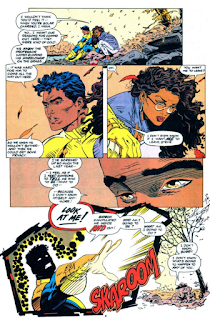 The boathouse on the grounds of the Xavier School is set to be on the shore of the Spuyten Duyvil Cove; I *think* this is the first time the body of water has been named.

In a callback to the first issue of the series, Shatterstar has learned how to read a clock face. 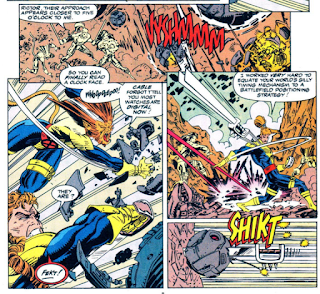 Siryn & Warpath work together to illicitly copy some files from Professor X; though the file copying doesn't really come up again, Siryn & Warpath will spend more time together in the future. 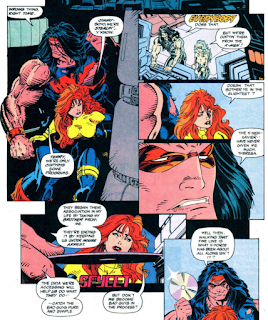 Cannonball uses a driving metaphor to describe the New Mutants' history, saying X-Force wants to take the wheel for themselves after being driven by Xavier, Magneto and Cable. 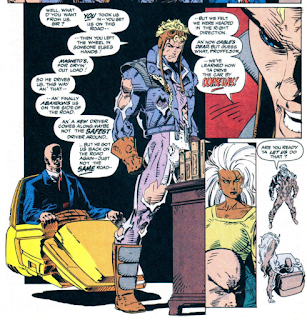 The Grim 'n' Gritty 90s
In the span of a few panels, Boomer references Cindy Crawford's House of Style and Calvin Klein, and refers to her teammates' style as "Akira Schwarzkopf" (and name checks Madonna & Joan Jett).

Upon receiving a new costume, Warpath makes a crack about the shoulder pads on his old costume. 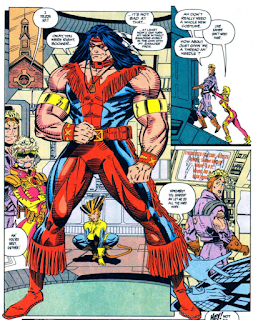 The Reference Section
Beast is also referred to as "Bones", a nod to the Star Trek doctor who shares his name.

Young Love
Lila Cheney and Boomer talk about Cannonball, with Lila giving her blessing for Boomer to pursue Sam, officially ending the Sam/Lila relationship that effectively ended in New Mutants #70 (when Lila disappeared and was believed dead). 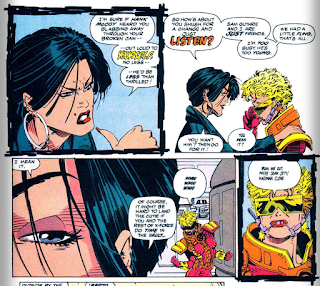 To the EXTREME!
In arguing about X-Force's approach with Xavier, Cannonball (rightly) points out that little of what X-Force has done is any more illegal than what the X-Men have done through the years. 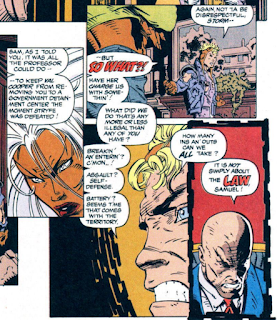 It's in the Mail
The upcoming Deadpool miniseries is teased on the letters page, with Joe Madureira announced as the artist.

Austin's Analysis
It's a testament to the emerging quality of the series (and/or an indication of just how poor it was in its early days) how often I find myself saying this, but this is the best issue of this series yet. Another epilogue to "X-Cutioner's Song", it's not quite as emotional as Uncanny X-Men #297 nor as character-driven as X-Factor #87, but it is nevertheless remarkably good. With Cable gone (for a few issues at least) and both Rictor & Sunspot back on the team, this issue really marks the point at which X-Force becomes what it always should have been: a showcase for the slightly grown-up New Mutants. Between Sunspot reminiscing to Stevie Hunter, Lila Cheney hanging around, and Cannonball surveying the history of the New Mutants in his arguments to Professor X, this issue is as much an epilogue to New Mutants as it is to "X-Cutioner's Song".

Beyond that, this issue tackles head on the question of where X-Force's extreme approach fits in the larger worldview of the X-Men. This was always something of a weak distinction, since the whole "extreme" thing ended up being told more than shown; aside from some teeth-gritted proclamations from Cable, in practice, little X-Force did was all that different from what the X-Men do. Still, some semblance of a difference existed, and Nicieza wisely gets out in front of it here. The "open hand/closed fist" discussion is Philosophy 101, but Sam's illustration to Xavier is nevertheless effective (it blew my pre-teen mind). The end result is a new-ish status quo for X-Force, one in which they will continue to be a more extreme (still in name if not necessarily action) and slightly-less legitimate extension of Xavier's dream, but without being full-on fugitives wanted by both the government and the X-Men.

In practice, this isn't a whole lot different than their previous status quo, but it does, when coupled with the recent membership changes and other events in this issue, allow the book to exist chiefly as a "grown-up New Mutants" series, one unafraid to embrace that series' history and handle its characters in that context. X-Force will continue to undergo periodic status quo shifts (including a time when they're even more directly under the wing of Xavier once again, as well as their own variation on the X-Men's "Non-Team Era"), but for the remainder of this iteration of the series, "grown-up New Mutants" will be its foundation, its Liefeldian origins more or less pushed ever more to the margins moving forward.