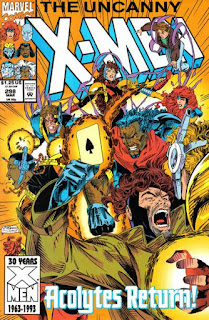 In a Nutshell
The reformed Acolytes attack a school.

Plot
While monitoring the news from his Ready Room, Xavier is interrupted by Bishop, who attempts to tender his resignation from the X-Men, feeling he has failed at assimilating to their methods. Xavier denies his request, reminding him that above all, Xavier's is a school. At another school upstate, Sharon Friedlander is attacked, while Jean & Archangel lead Gambit & Bishop in a Danger Room session. As Storm & Xavier meet in Central Park with Charlotte Jones, Xavier telepathically senses Sharon's distress, and sends the X-Men to the school. They arrive just as the reformed Acolytes attack Tom Corsi, also undercover at the school. They are attempting to capture a would-be mutant child, but upon learning the child has Downs Syndrome, they instead try to kill the boy. The X-Men manage to save the child and force the Acolytes into retreat, but in the wake of the attack, Senator Kelly spins the events to further his anti-mutant agenda, much to the concern of a watching Xavier.

Firsts and Other Notables
This issue re-introduces the Acolytes, establishing that they are continuing to operate in the wake of Magneto's death (something previously established in Avengers #350). With most of the original Acolytes dying alongside Magneto in X-Men #3, this group will be comprised almost entirely of new members (Cortez will eventually be revealed as their leader still, at least at until Magneto returns); this issue introduces a handful of them, with more to come in future issues. This iteration of the Acolytes (with some variations of membership) will become a recurring nemesis for the X-Men throughout much of the 90s, serving a similar role as Mystique's Brotherhood/Freedom Force and the Reavers did in earlier eras. 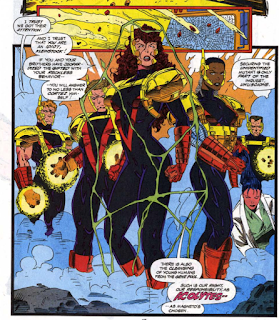 Amongst the new Acolytes are Unuscione, a young woman with a psionic exo-skeleton (not unlike later X-Men member Armor), who is maybe the daugther of Unus the Untouchable (they share a last name and similar powers, though their relationship has never officially been confirmed), and the Kleinstocks, a group of triplets with vague energy blast powers who can merge into a gestalt form with increased size, strength and mass. Eric is killed in this issue, while Sven and Harlan will remain mainstays of this iteration of the group.

Along with them is Frenzy, former member of the Alliance of Evil and foe of the original X-Factor, who is using the name Cargill (her given last name). We also learn that her first name is Joanna. 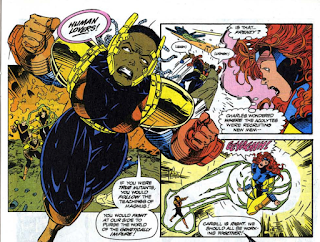 Hot on the heels of Stevie Hunter's return in "X-Cutioner's Song", this issue features the return of two more New Mutants veterans, Sharon Friedlander and Tom Corsi, who are revealed to be working undercover for Xavier, guarding a potential mutant. Tom will return for a few issues of Generation X, but Sharon is killed in the course of the issue (something which neither the art nor the story make terribly clear, but which is confirmed next issue). 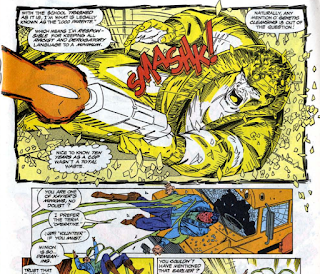 Senator Kelly also appears in this issue, his first appearance since issue #281, setting up a more significant appearance next issue, the beginning of a few years' stretch in which he'll once again be a regular, if infrequent, presence in the franchise. 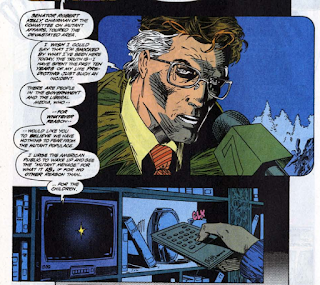 With Iceman & Colossus appearing in contemporaneous issues of X-Men, Gambit guest stars in this issue.

Per the Statement of Ownership in this issue, sales are continuing to rise, with the average number of copies sold in the past twelve months listed as 731,425 (compared to 460,875 in the previous statement), while the single issue closest to filing date sold 605,900, compared to 599,550, possibly indicating a sales hit and/or leveling off of sales caused by the Image Exodus (or just indicating a relative "down" issue being published near the filing date).

A Work in Progress
Furthering the connections between Xavier and the other notable fictional character played by the actor who will one day play Xavier in several X-Men movies, this issue reveals that Professor X has a "ready room" in the mansion.

It's also said that Xavier's mutant brain is capable of processing lots of information at once, a heretofore unmentioned aspect of his powers.

Sharon says she has no regrets about coming to work for Xavier, suggesting she's made remarkable progress dealing with the ramifications of that time she and Tom were forced to almost sex themselves to death by Empath. 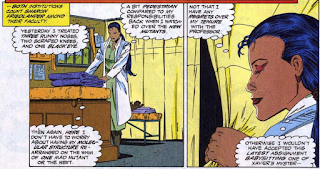 It's been a long time since the X-Men operated as any kind of teaching unit, but this issue has Jean in an instructor role, working with Bishop and Gambit. 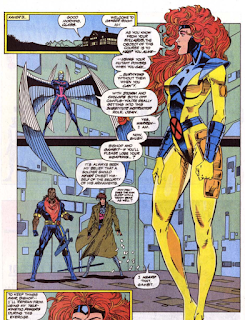 In part, the duos Danger Room session is an attempt to force them to work together following their confrontation in X-Men #8 and the lingering animosity between them. 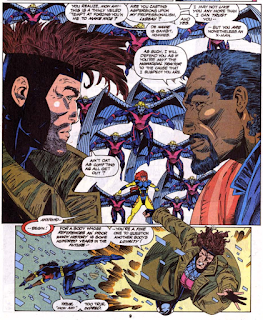 Charlotte Jones pops up briefly to deliver Xavier some files; I don't think much comes of this, but hey, always nice to see Charlotte Jones. 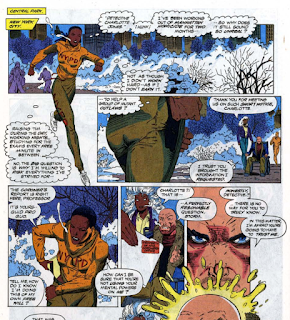 Gambit is shown to have a past with Frenzy (he knows her first name is "Joanna" and she knows him as Remy), though as far as I know nothing really comes of this - there's no "the secret history between Gambit & Frenzy - revealed!" issue - and instead, it's just another example of the "Gambit has a mysterious past" trope. 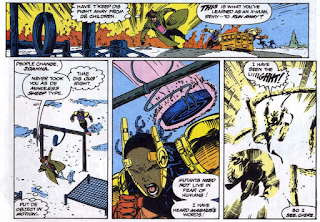 Human/Mutant Relations
The young mutant being targeted by the Acolyte's (and protected by Tom & Sharon) has Downs Syndrome; when the Acolytes learn this, they are repulsed and consider the boy inferior, the hypocrisy of which the X-Men point out. 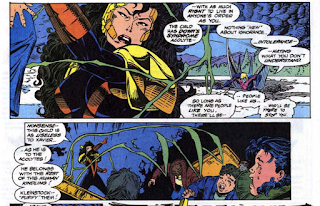 For Sale
There's an ad for a video recording of the animated series pilot, which serves as a reminder that videos were still hella expensive even in the early 90s. 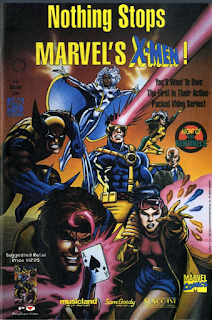 Both Uncanny X-Men #300 and Cable #1 are teased in this issue's Entertainment This Month ad. 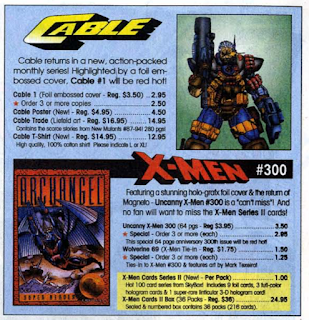 It's in the Mail
There's a lengthy letter in this issue from a writer upset that Xavier included homosexuals in his list of people who are affected by prejudice, saying they shouldn't be included with other such people because they "chose" to be gay. It is, thankfully, less rant-y and more even-keeled than it could have been, but the big takeaway is that, unfortunately, it's expressing a sentiment still prevalent in some circles twenty-four years later. 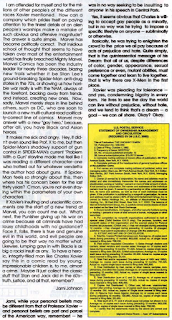 Austin's Analysis
While this issue ostensibly kicks off a three-part story that essentially serves as a prelude to "Fatal Attractions"/teases the return of Magneto in said crossover (which means, it should be noted, the run-up to the next event crossover begins not one full issue after the epilogue to the last crossover event), it does so in fairly old-fashioned way, via three more-or-less standalone issues that nevertheless work together as a whole. Here, the main concern is the reintroduction of Magneto's Acolytes, complete with new members and a renewed zeal, effectively positioning them as the ideological counterparts to the X-Men (since the previous ones - the Brotherhood of Evil Mutants - have been mostly co-opted by other series and no longer have the strong "mutant rights" angle that made them thematic opposites). While many of these new Acolytes are, in hindsight, laughably 90s, there are a few legitimately worthy additions; here, the introduction of both Unuscione and the re-introduction of Frenzy help tie these Acolytes to the narrative's history beyond just their connection to Magneto.

Beyond that, this issue also introduces a couple of plot threads that will run, off and on, throughout Lobdell's time as the series' chief architect: a general worsening of human/mutant relations (something that gets even more attention next issue) and the overall darkening of Xavier (a narrative trick that will be done to death post-Lobdell, but which really starts here), as we see a weary Xavier monitoring events and get the first hints of his network of "underground operatives". All in all, it's a surprisingly prescient issue, one that lays a lot of groundwork for stories in both the immediate and more far off future, establishing the tone and narrative scope of the post-Image Exodus era. That it does so while also telling a largely self-contained, action-orientated story is rather impressive.

Next Issue
Tomorrow, Random debuts in X-Factor #88. Friday. the truth about Terry Adams in Wolverine #67. Next week, the return of Omega Red in X-Men #18.