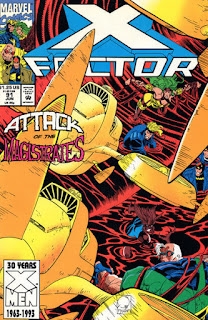 In a Nutshell
Multiple Man is infected by the Legacy Virus.

Plot
In the tunnels beneath Genosha, X-Factor hunts for the escaped mutate, hoping to capture him before the Magistrates kill him. Finding an interactive map of the system, Polaris sees a trio of Magistrates approaching Wolfsbane, but when Havok & Strong Guy arrive to help, she has already overpowered them. Meanwhile, Val meets Quicksilver at the airport, and continues to manipulate him. Back in the sewers, Madrox finds the escaped mutate. He is near death, and in order to resuscitate him, Madrox is forced to create a duplicate, thus exposing himself to the same disease killing the mutate. After he's revived, the mutate reiterates that he doesn't want to die a lab rat, so X-Factor returns him to the treatment center and ensures he's allowed to die with dignity. The Genoshan president promises Havok they'll free the mutates of their mental conditioning once they've found the source and cure for the disease afflicting them, and as they leave, Wolfsbane tells Madrox he looks like death warmed over.

Firsts and Other Notables
Though it's only hinted at in this issue, this marks the point at which Madrox is infected with the Legacy Virus, as he exposes himself to infection by creating a duplicate to perform CPR on the mutate dying of the disease, then reabsorbs that dupe. This will ultimately lead to his death in issue #100, making him the most high-profile victim of the virus (even though he will, not surprisingly for both comics and a character whose whole schtick is making duplicates of himself, eventually return). 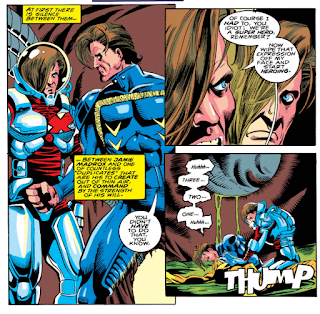 The credits in this issue cite Joe Quesada, but this issue is in fact drawn by Jan Duursema (doing a pretty good Quesada impression at times), as confirmed in next issue's letter column. One of superhero comics unfortunately-rare female artists, this marks Duursema's first work for the X-office, where she'll contribute to a variety of issues sporadically over the next few years (and serve as this series' de facto regular artist starting with issue #99, albeit with regular fill-ins), though I know her best from her lengthy collaboration with John Ostrander (amongst others) on Dark Horse's 00s Star Wars books.

As Havok attempts to help Rahne deal with the recent revelations about how she was modified and manipulated by the Genoshans, she delivers a much-appreciated rebuke about his concerns are primarily aimed at him, and that she simply wants her life back. 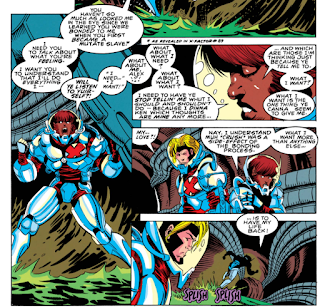 The Evil Val subplot continues as she plays mind games with Quicksilver, with a hint at next issue's revelation provided via her reaction when he compares himself to his father. 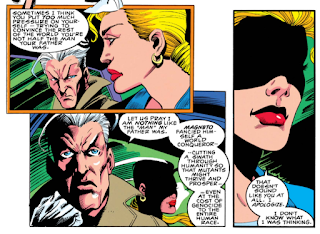 A Work in Progress
A narrative caption mentions Havok fighting side-by-side alongside his brother with the X-Men, when in fact, that never really happened; they were technically both members of the team towards the end of the original Silver Age run, but were separated for most of that, aside from repelling the Z/nox invasion (and even in John Byrne's retroactive Hidden Years, they were apart from one another most of the time). After that, Havok was always a substitute member of the team, at best, until he rejoined in X-Men #219. And for the rest of his tenure with the team after that point, Cyclops was isolated in the original incarnation of this series.

Preparing to save the dying mutate, Madrox references his time as Moira's lab assistant. 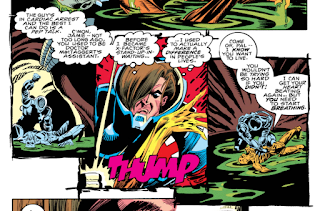 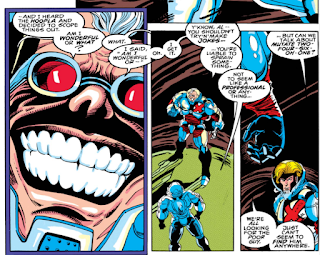 Then, Strong Guy says "Cheez and Louis" instead of "geez louise", twice. 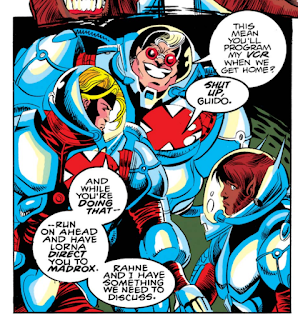 The Reference Section
The mutate being sought by X-Factor in this issue is number 24601 which, as a kid, I also knew as Principal Skinner's POW number in Vietnam, per the classic "Homer's Barbershop Quartet" episode of The Simpsons. Since that episode came out after this issue was published, I was always confused by the double reference, doubting that the Simpsons writers were big fans of the X-Factor.

Only later (ie when I saw the musical for the first time) did I realize that 24601 is also the prisoner number of Jean Valjean in Les Miserables, and that is what both stories are referencing.

I never said I was the sharpest kid...

The Grim 'n' Gritty 90s
Hey, remember VCRs, and how programming them was apparently difficult, such that it became shorthand for a difficult task?

Austin's Analysis
X-Factor's Genoshan jaunt, begun in issue #89 (but setup back in #83), comes to a close this issue, and as mentioned before, it's hard to imagine this is what Peter David had in mind when he sent the team there. Instead, Lobdell uses it as an opportunity to widen the quickly-building Legacy Virus storyline, spilling it out of the two main X-Men titles into the spinoffs. In the process, he sets the stage for what will become the biggest victim of the virus (at least in terms of prominence relative to a series' recurring cast), but this is is otherwise a perfunctory conclusion to the story, with the immediate problem (capture the sick mutate before the magistrates kill him) resolved along with some closing-page lip service to the idea that Genosha is trying and will continue to try to do better by the Mutates, but little of the larger issues raised by earlier chapters are resolved, up to and including the X-Patriots (who brought X-Factor to Genosha in the first place but have since disappeared from the story) and the fate of Wolfsbane's now-revealed genetic and mental tampering (which is temporarily put to rest via her speech to Havok, but remains very much in play). Still, given the mid-story change of writers, this could have come out a lot worse, and if Lobdell more or less abandons David's plot elements, at least he replaces them with something relevant to, if not the series, the larger X-narrative.