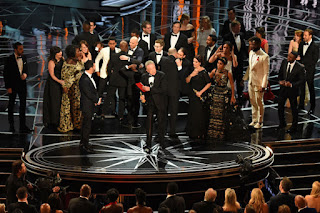 I've been watching the annual Oscars telecast every year since 1992 (at least, that's the first one I have vivid memories, in part because I was heavily rooting for A Few Good Men, the one film of the five best picture nominees that I'd seen, to win (which it didn't, giving me my first taste of Oscar disappointment); it's entirely possible I'd seen some of the earlier ceremonies as well), and starting in 2001, I made a concerted effort to see each of the five nominated best pictures every year. When the Academy expanded the field from five nominees to, first, ten, in 2009, and then to a variable number between five and ten, in 2011, that practice became more difficult to reach, and though I came close in most years, there was always at least one I missed, usually by choice. But I knew the frontrunners, and if I didn't see ALL the best picture nominees, I usually at least saw all of the Best Director nominees and/or the presumed frontrunner, and so one way or another, I ended up having seen whatever was crowned Best Picture on Oscar night.

All of which is a lengthy preamble to say that Moonlight is now the first best picture winner I hadn't seen when it won since Shakespeare in Love in 1998 (I wasn't making a point of seeing everything back then, but it didn't matter, because it seemed so obvious that Saving Private Ryan would win). This is mostly down to having only seen an embarrassingly-low two of the nine best picture nominees at this point, a fact brought on by the dual circumstances of:
A. having a toddler, and
B. Oscar season falling right on top of me and my wife's efforts to get our house ready for sale.

Either factor could be overcome on its own (my son was one last year, and we still managed to see six of the eight best picture nominees), but the two combined more or less killed our usual post-Christmas, pre-Oscar broadcast movie binge. We saw La La Land (thanks to some shared time off after Christmas, when we made a point to at least see the presumptive Oscar favorite) as well as Arrival (thanks to its recent release on home video coinciding with a night in which we weren't completely exhausted from either"A"and "B" above). Going into last night's ceremony, I felt confident in our failed efforts this year because, after all, everyone knew La La Land was going to win, so even though we'd failed in our usual efforts, we'd at least have seen the Best Picture winner.

Then something awesome happened last night. Not necessarily Moonlight winning in and of itself (again, haven't seen it yet, but I hear it's great and very deserving of the win), but how it won, via easily the most memorable Oscar moment since I've been watching the show, and maybe ever. Having the wrong film announced as the winner, to the point that its producers began and finished their acceptance speeches before the correct winners came to the stage, was amazing. It's the kind of "everybody is going to talk about that!" moment for which you watch the Oscars, and live TV in general. It may not make every future Oscar moments clip reel produced by the Oscars themselves, but it's going to be on, if not at the top of, every pundit and internet writers' "memorable Oscar moments" list for a very long time.

Watching it unfold live, it was unbelievable. When Warren Beatty & Faye Dunaway came out (presenting the award in recognition of the 50th anniversary of Bonnie & Clyde, which was nominated for Best Picture in 1967 but lost to In the Heat of the Night), we joked that Beatty & Harrison Ford should enter a "grandpas angry-whispering at each other" fight. So when Beatty proceeded to seemingly have issues reading the card after opening the envelope, we chalked it up to him forgetting his glasses, or having a hard time reading the card in the stage lights, or something similarly charmingly-old-manish. He proceeded to show it to Dunaway, and she triumphantly declared "La La Land" in that way you do when you've lost patience with your grandparent taking forever to spit out the obvious, and that was that.

We nodded in the recognition of the obvious, and began to move on. I received a gloating text from the person in our Oscar Pool who won, and as the speeches wound down, we prepared to go to bed. Then I noticed someone wearing a headset frantically running amongst the La La Land scrum behind the producers giving their speeches. Beatty looked uncomfortable. There was pointing and much passing of the envelope containing the winner's names. Realization dawned that something fishy was going on. Then La La Land producer Jordan Horowitz called the Moonlight people up on stage (in an extremely classy moment), declaring they had won, and it was not a joke. Boom. Oscar history had been made.

And look, this is the Oscars. In the grand scheme of things, especially in light of what's going on in the world right now (moreso than all the other times we say things like that), this is trivial. But I love the Oscars, and have since I was a boy, because they combine my love of movies with my love for trivia. Who won the most awards? A tie between Ben Hur, Titanic, and Lord of the Rings: Return of the King, with eleven. Which are the only films to win the "Big Five" awards of Picture, Director, Actor, Actress and Screenplay? It Happened One Night, One Flew Over the Cuckoo's Nest, and Silence of the Lambs. Who is the youngest director to win Best Director? Damien Chazelle, the previous bit of history-making in last night's show. I eat that kind of stuff up, so seeing something like this unfold (Which is the only film to be announced as the winner, but not actually have won? La La Land!) was pretty fantastic.

But Moonlight's win is bigger than just the trivia/inevitable "memorable moments" listicle dominance. While plenty of critics & pundits cited it as the film they wanted to win or thought should win, it's victory, regardless of how it was announced, still marks the biggest Best Picture upset since Crash toppled Brokeback Mountain in 2005 (and, arguably, the biggest upset ever). Its win marks the first time a movie featuring an all-black cast has won Best Picture, a not insignificant distinction on the heels of #OscarsSoWhite, and, really, all of the Academy's history, hopefully showing that the Academy is more open to embracing a wider diversity of both creators and subjects.

And, speaking simply as someone who watches the Oscars every year and has a decent grasp of its history, it speaks to larger democratization of the Oscars that seems to have been happening over the last few years. In general, but underscored by Moonlight upsetting La La Land, it seems like the Academy is becoming more willing to share the wealth, spreading awards among a larger number of movies rather than clustering them all around a specific perceived juggernaut.

Once upon a time, it was a hard and fast rule in Oscar prognostication that whomever won Best Director, his film (pretty much always his) would win Best Picture. From 1981 to 2011, the two awards deviated from each other only six times (with half of those deviations coming in 2000 or later). In the five years since, the two awards have matched up only once (in 2014, for Birdman). Film Editing and Best Picture used to go hand-in-hand; they've done so only once since 2010 (Argo, in 2012). The two sound awards, Editing & Mixing, historically, matched one another more often than not (one movie would get both awards); not so much anymore. And we're seeing movies winning in categories which represent their only nomination, or for which they seem to be legitimately deserving, rather than voters just ticking off the box next to the presumptive Best Picture favorite. Ex Machina in Visual Effects last year. Fantastic Beasts winning the costume award last night, ahead of Jackie and La La Land.

Once upon a time, the film with the most overall wins was also usually the winner of Best Picture; it happened 28 times between 1981 and 2011 (with some ties, of course). Since 2012, it's happened once (Birdman, again, which tied with Grand Budapest Hotel with four wins each). It's also been a long time since we've had one movie really sweep the awards; Gravity is the big winner of the last five years, seven in 2013, but it didn't win Best Picture. The last true "win 'em all" movie (the type of movie where you feel like it's constantly getting announced during the show) was probably Slumdog Millionaire in 2008 (it won eight awards overall, including Best Picture). Which is partially why a big night for La La Land was being predicted: the Oscars were overdue for another "win 'em all" kind of victory (of course, La La Land did walk away with the most wins last night, six, but that was well below expectations; in some corners, the idea was floated that the movie had a legitimate shot to tie the record of eleven, or even surpass it, given that it had fourteen nominations overall and seemed generally, if not beloved, at least well-liked). Personally, I figured it would get eight, for a Slumdog-esque level of dominance).

All of which makes it seem like the way the Academy votes and thinks about the various awards has changed and is changing. Some of that is due to the changes in how Best Picture is voted on, using a preferential run off ballot which rewards movies with wider support over those with a fervent fanbase (basically, a movie that most voters find good but not great is more likely to win than a movie with a smaller fanbase that loves it way more than anything else, which, frankly, pundits were pointing to as further proof for why La La Land would win, so who knows?). Some of it could be due to the changing Academy membership, which was (very, very slowly) skewing younger and more diverse even before a concerted effort was made to do both those things last year, in which the group received a huge influx of new members. It could also be due to changing tastes in movies, in the kinds of movies being made and the different people making them. It's likely a combination of all those factors, and of course, it's probably impossible to know for sure.

But ultimately, this democratization, if it is indeed a genuine trend and not just a five year blip, is a good thing, as it seems to be both spreading the wealth while also rewarding legitimately worthy achievements. La La Land's direction was a deserving win, but that doesn't mean the film automatically should win Best Picture. The mix of its sound was routinely cited as its biggest flaw (making it hard to heart the lyrics of the songs in many places) and hey, look at that, it didn't win Sound Mixing even though it was a presumptive favorite to sweep the ceremony and gobble up technical awards on sheer momentum. Less instances of one movie winning tons of awards means more movies are winning awards overall. This is a good direction for the Academy to be moving in, for both creators and audiences, even if throwing out a lot of these stalwart Oscar "rules" makes winning a pool that much harder...
Newer Post Older Post Home
Posted by Austin Gorton at 12:00 PM