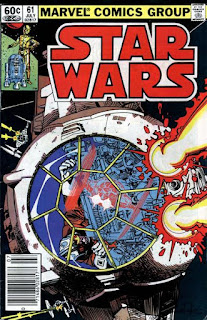 In a Nutshell
An attack on the Imperial armada leads to Luke seemingly killing Shira.

Plot
At the Rebel base on Arbra, Shira Brie receives a medal and a promotion for her recent actions on Shalyvane, while the Imperial armada continues its journey to the Imperial capital with the cargo it was created to guard: a Teezl, one of an alien species capable of giving the Empire near-instantaneous communication. On Arbra, Luke & Shira oversee the modifications made to the four captured TIE fighters: transceivers to identify them as friendly ships have been installed, and the guns modified to fire only a half dozen shots before all their energy is put into one massive blast. Luke and his squad then depart, stopping along the way to retrieve recognition codes for the armada from a captured Imperial scout. Using the codes, they infiltrate the armada, and proceed to use their modified ships to wreak havoc. But as Luke begins his attack run on the flagship carrying the Teezl, Admiral Giel orders the Teezl to block all communications, preventing Luke from telling which TIEs are enemy craft and which are his teammates. Relying on the Force instead, he blasts a TIE in his way, then gets off his super-charged shot, destroying the Teezl. Landing back at Arbra, a jubilant Luke's spirits are dulled when Leia shows him footage of the mission, revealing that the pilot of the TIE he blasted just before destroying the Teezl was Shira.

Firsts and Other Notables
Shira Brie seemingly dies this issue, inadvertently killed by Luke when he blasts her TIE fighter, after using the Force to determine whether the pilot of the ship was friend or foe. 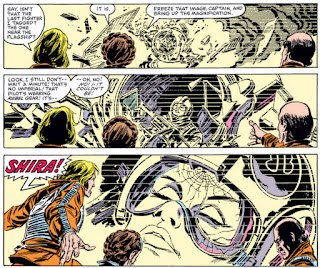 The Empire's latest threat to the Rebellion, the thing around which the armada introduced last issue was created to protect, is a Teezl, a though-extinct non-sentient alien species capable of ampylifying communications, such that, properly harnessed, the Empire could use it to achieve near-instantaneous communication between all its various ships, bases, and planets (credit to Michelinie & Simonson for coming up with a new major threat that isn't just a thing that can blow up planets. 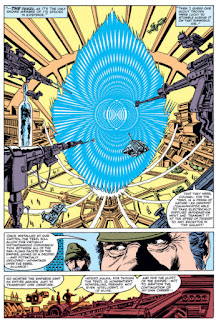 This is one of those issues which, reading it in the present day, reminds me that the fandom surrounding Wedge Antilles hasn't always existed, and is, in a lot of ways, a by-product of the old Expanded Universe. He would have been a natural fit for Luke's four man squad in this issue (and/or to have appeared alongside Luke & Shira in the fighter squadron in earlier issues), but of course, in 1982, Wedge was just one of the minor Rebels who had appeared briefly in the two movies; the mythology around him hadn't been built up yet, so there was little reason for Michelinie and Simonson to notice and use him.

That makes this as good a time as any to point out that the group of pilots Luke & Shira have been working with for the last half dozen or so issues are referred to as being part of Rogue Squadron (the group with which Luke - and Wedge - flew in Empire Strikes Back, and which later when on to much Expanded Universe fame) by Wookiepedia, though I don't believe the group has been referred to as such within the series itself yet (again, like with Wedge, this is likely just a case of nobody knowing Rogue Squadron was a thing and not thinking to make it one themselves).

A Work in Progress
Prior to her apparent death, Shira received a medal (and ceremony a la the end of A New Hope) and promotion to Captain for her efforts on Shalyvane last issue (which, yes, she did save Luke and the rest of the squad, but on the other hand, they were only there because of her). 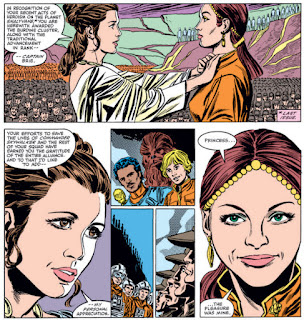 The Imperial armada is transporting the Teezl to the Imperial capital, but it is not named specifically.

Um, Actually
The Rebel TIE fighters are capable of flying through Hyperspace on their own, whereas standard Imperial models cannot. Possibly, the Rebels modified them as they did the blasters, but no mention is made of that. 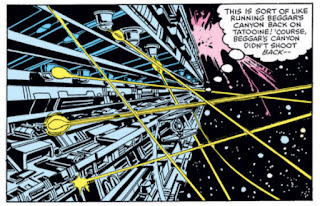 Young Love
Leia continues to show jealousy towards/resentment of Shira, but she also (finally!) seems to remember she's supposed to be in love with Han, and wonders aloud why she's so bothered by Shira. 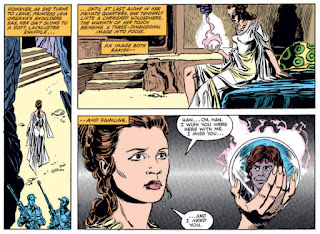 Just as they're leaving on their mission to destroy the Teezl, the subtext between Luke & Shira becomes text as the pair kiss. 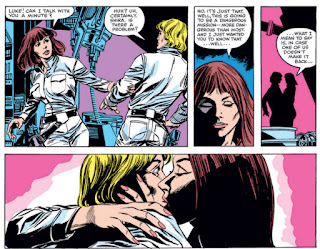 Austin's Analysis
As with the earlier "To Take the Tarkin", Michelinie & Simonson's "standalone chapters within an ongoing narrative" approach lessens the impact of this issue, as the Rebels once again defuse a significant Imperial threat with relative ease (if all that is required to take out a Star Destroyer is a souped-up TIE fighter, the Rebellion should be doing everything they can to get as many as possible). While the building blocks to this issue occurred in previous ones (the acquisition of the TIEs, the reveal of the Imperial armada), as with the Tarkin, the threat of the Teezl would have come across as more foreboding - and the Rebel victory more cheer-worthy - had it been allowed to develop over more than one issue, if it had taken the Rebels more time to overcome it.

Of course, we're meant to come away feeling like this was a Pyrrhic victory for the Alliance, as Luke seemingly kills Shira in the course of completing the mission. Unfortunately, I know where this is going, so it's hard for me to gauge how effective a gut-punch this would have been at the time. Certainly, Michelinie & Simonson do an effective job of building a sense of foreboding throughout the issue, from setting up the specific circumstances of the TIE modifications, to Luke & Shira consummating (that is, kissing, ie what counts for consummation in the Star Wars universe at this point) their relationship before flying off into battle, which, even without knowing what's coming, is a pretty big red flag that something bad is going to happen to one or the other (and Shira isn't the star of a still-unfolding trilogy of films). So even with the somewhat-rushed introduction and subsequent dispatch of the latest Imperial plot-du-jour, there's enough solid craft on display here to continue the series' recent strong showing.