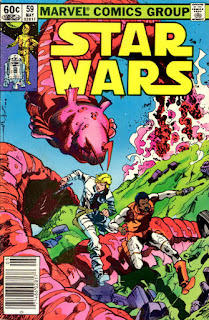 In a Nutshell
Luke & Lando team-up with space hobos to fight a giant garbage worm.

Plot
Aboard the Bazarre, Luke & Lando meet with Ferret, concluding their deal to purchase four TIE fighters from him. However, Ferret has put the fighters on Patch-4, and requires Luke & Lando to take a pre-programmed shuttle to that world to retrieve them. As insurance, Chewbacca stays behind to watch over Ferret. Soon, Luke & Lando arrive on Patch-4, a world covered in garbage, and are promptly attacked by a massive worm-like monster. They're given shelter by a group of hobos who, after being displaced from their homes, have gathered underground on Patch-4. They tell them that Ferret keeps a sonic pacifier that can control the beast, whom they call Ceasar, on the ship which brought Luke & Lando to the planet. Back on Bazarre, Ferret, assuming Luke & Lando have been killed by Ceasar, captures Chewbacca. On Patch-4, Lando manages to distract Ceasar long enough for Luke to reach the pacifier, and on Bazarre, Chewbacca manages to escape and hunt down a fleeing Ferret. When Lando & Luke return to the ship, they tell a captive Ferret they've successfully retrieved the TIE fighters, but leave Ferret be, saying they've dealt with enough garbage for the day.

Firsts and Other Notables
First mentioned last issue, Ferret appears for the first time here, and in a somewhat clever bit, he turns out to be a rather simple looking older man. It's revealed that he's helped the Rebels acquire four TIE fighters. He'll be mentioned in a few subsequent issues, but this represents his only appearance in the series. 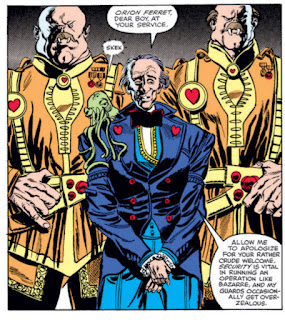 Luke and Lando befriend a group of space hobos on Patch-4, comprised of, essentially, refugees from the war with nowhere to go and forced to live underground due to Ferret's watchguard, Ceasar.  They're left with the sonic device used to control Ceasar, so at least they now get to live on the surface of a garbage planet. 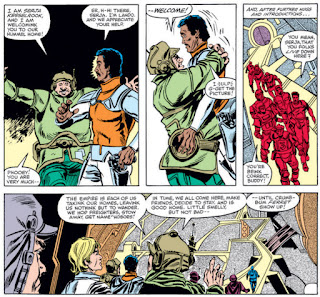 Editor and inker (and occasional "penciler") Al Milgrom takes over from Louise Jones as the series' editor as of this issue.

A Work in Progress
Lando's clothes (as drawn on the cover, less so in the issue itself) are vaguely reminiscent of his later look while masquerading as a guard in Jabba's palace in Return of the Jedi.

This issue features a rare example of Chewbacca using his signature bowcaster weapon; it also suggests that, at least on occasion, he breaks the weapon down and carries the component parts in his satchel. 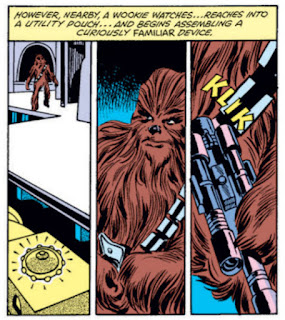 Just Yesterday, In a Galaxy Surprisingly Close By
Though their dialogue says that Lando pays Ferret for the TIE fighters with credits (the usual form of currency in the Star Wars galaxy), the art makes it look like Lando's giving Ferret a fistful of good ol' American greenbacks. 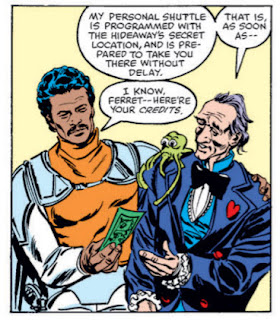 Coffee grounds are referenced as being amongst the garbage on Patch-4. 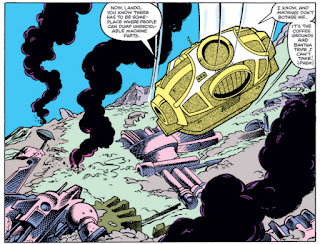 Though the idea of refugees from a war who have lost their homes and live in poverty is, unfortunately, fairly universal and timeless, the term "hobo" specifically seems a little anachronistic relative to the Star Wars universe.

It's the Mail
A response to a letter in this issue suggests that the repurposed John Carter of Mars inventory story that comprised issues #53-54 was an homage to that series, which Chris Claremont used to write, instead of what it actually was, a repurposed issue of the Carter series.

Austin's Analysis
Though they've interacted and teamed-up before, this issue is clearly designed to be a showcase for the Luke/Lando relationship, and while Michelinie & Simonson don't quite succeed at making it a whole lot different than the Luke/Han relationship, they do effectively manage to show how Lando is himself more than just a rogueish Han Solo stand-in: he complains about his new boots getting wrecked by the muck of Patch-4, he's delighted by the prospect of potential fame when he thinks he's pulled off an amazing shot (Han would, of course, appreciate the financial prospects of such fame, but never seemed quite as interested in fame as an end unto itself as Lando is), and his relationship with Ferret is shaded more like a "dealings between two shady but equal businessmen" kind of thing than the usual employer/unwillingly-subordinate employee relationship between Han and the various underworld figures he'd encounter, which usually had Han at a power disadvantage. The end result is that Lando continues to feel like a distinct character in his own right, even outside the trappings of Cloud City, and not just a lukewarm substitute for Han.

And while all of that is all well and good, this issue is really notable for featuring space hobos. Space hobos! Nothing wrong with that.