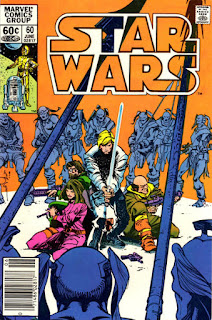 In a Nutshell
The origin of Shira Brie

Plot
Using their recently acquired TIE fighters, the Rebels attack an Imperial facility and gain the coordinates to a new Imperial armada. Returning to Arbra, Shira requests leave to attend a personal matter, but Leia will only let her go if accompanied by Luke and the rest of her fighter squadron. Meanwhile, the leader of the Imperial armada dismisses the severity of the Rebel's attack. Elsewhere, the Rebel squad arrives on Shalyvane, Shira's homeworld. They land on the outskirts of a deserted town, and Shira proceeds to an altar within, cutting her hand to leave behind some blood. Just then, a group of barbarians attack the Rebels, and Shira explains how the same barbarians used to attack her people, until they brokered a phony peace treaty to lure them into an attack by the Empire, during which Shira's family was killed. She managed to escape and join the Rebellion, and since then, she's returned to the site each year to add her blood to her family's. Luke proceeds to send Shira through the tunnels she used to escape the Empire as a girl while he and the rest of the squad hold off the barbarians, and Shira is able to reach her X-wing and turn the tide just as Luke is about to be overwhelmed. Together, the Rebels leave the planet and the past behind, and head into the waiting future.

Firsts and Other Notables
This issue provides a bit of backstory for Shira Brie, as she returns to her homeworld as part of yearly pilgrimage to pay homage to her dead family and reconfirm her commitment to fighting the Empire. 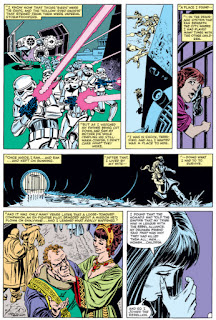 The Rebels learn about the existence of new, secret, Imperial armada, which will presumably factor in to future issues. It is led by Admiral Giel, the latest in a line of blustery Imperial admirals who don't want dissenting opinions from their subordinates. 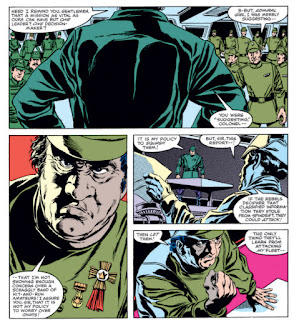 A Work in Progress
When the Rebel-piloted TIE fighters attack the Imperial base, the officer in charge assumes it must Darth Vader carrying out retribution for some wrong-doing, which is a pretty hilarious insight into the workings of the Empire. 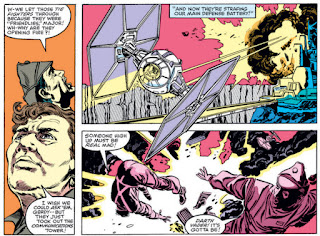 Um, Actually
The Rebels piloting the TIE fighters don't appear to be wearing any kind of atmospheric suit, despite the fact that TIEs don't have a life support system.

You Kiss Your Sister With That Mouth?
Leia continues to throw non-verbal shade at Shira fawning over Luke.

Just Yesterday, In a Galaxy Surprisingly Close ByOne of the Rebel pilots is wearing glasses, which just seems...odd for the Star Wars universe.

Austin's Analysis
Michelinie & Simonson continue their "standalone chapters in an ongoing narrative" approach to the series, with the TIE fighters acquired by the Rebels last issue used to pull off a raid against an Imperial facility, in the process learning about a new Imperial armada that will, presumably, factor into future issues. This issue also delves into the past of Shira Brie, who's been hanging around for the last few issues making mooney eyes at Luke and inspiring jealousy in Leia without really having much of a character beyond the mooney eyes and being a good pilot.

Here, her requisite tragic backstory is revealed along with motivations for joining the Rebellion, but the creators give it a little bit of complexity beyond just "the Empire destroyed her family", turning the Imperials into tools of the local barbarians who constantly harassed her people, brought in only after a peace treaty fakeout, thus giving her almost double-reason to hate the Empire. Of course, I know a little about where Shira is going as a character without knowing a lot of the details, and I'm curious to see how this backstory factors into those events. But for now, it serves as a necessary bit of character history coming along at just right the time, with just enough added complexity to make it interesting.

Next Issue
The Rebels meet the Imperial armada.