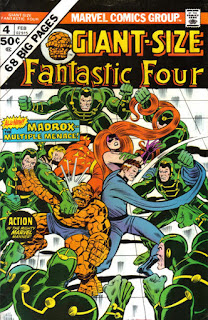 In a Nutshell
The first appearance of Madrox the Multiple Man

Plot
On his way to a football game with Alicia Masters, Thing's train is stopped due to man in a strange suit standing on the tracks, calling himself Madrox. When Thing punches him, a duplicate of Madrox is created, and with each ensuing blow, more Madrox are created, until Thing is overwhelmed. He wakes up at the Baxter building, where Reed Richards detects a series of power outages drawing nearer to the building. The outages are caused by Madrox, whose suit is absorbing the power and fueling his anger, and the Fantastic Four attack him. Madrox' duplication power proves to be too much for the Fantastic Four, until Professor Xavier arrives. He tells the Fantastic Four of how he gave Madrox' parents a suit to help control his power, but after his parents died, the suit malfunctioned and began absorbing energy, driving Madrox mad. Working together, Mr. Fantastic and Professor X are able to repair and improve Madrox' suit and knock him out, after which his duplicates disappear. Professor X then departs with Madrox, in order to help repair his mind.

Firsts and Other Notables
Madrox the Multiple Man makes his first appearance this issue, as a rather random opponent of the Fantastic Four (he's drawn to the power of the city by his malfunctioning costume, but there's no plot or thematic reason he had to fight the FF over any of the other various NY-based Marvel heroes). He disappears mostly into obscurity after this, until Claremont picks him back up and makes him a fixture (albeit a rarely-appearing one) of his Muir Island setting for the next couple decades, which in turn opens the door for getting drafted into the "All New, All Different" X-Factor by Peter David, which is when his star really starts to shine. 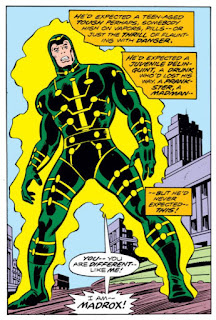 During Madrox' origin, his power is shown manifesting while he's an infant, when he's slapped on the butt by the delivering doctor and he multiplies. Most stories suggest that mutants don't develop their powers until puberty, though there are some cases (usually physical mutations) in which powers are present from birth. Most likely, this was done just for the gag of the doctor slapping the newborn and a double being created, but some later stories will use this apparent contradiction in usual mutant protocol to question whether Madrox really is a mutant, or something else entirely. 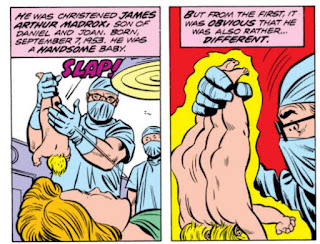 This issue was published during Marvel's brief dalliance with a regular "Giant-Size" format, that saw thicker comics sold for a higher price point, presumably to make them more attractive options to newsstands (a comic book eats up as much newsstand space as a magazine but costs less, and thus the profit margin for the newsstand is smaller; the higher price makes it more attractive to the newsstand to stock, the increased pages justifies the added expense to the reader). Originally cited as being a return to the annuals that started in the 60s (with the two often referred to interchangeably by footnotes), theses issues were in fact published more than once a year, and tended to tie-in to ongoing stories (such that a Giant-Size issue could be a chapter in an ongoing story started or continued in a character's regular-sized series) more frequently than annuals usually did (though not always; this issue is entirely standalone, of course).

In addition to the main story, this issue includes a reprint of Fantastic Four #28 (an early encounter between the X-Men and the Fantastic Four that might get its own Retro X-amination someday) and a series of seven pinups featuring the FF's "most famous foes" to round out its higher page count.

This issue also occurred during one of the Fantastic Four's occasional status quo shakeups; in this case, Invisible Girl has retired from the team, with the Inhuman queen Medusa filling her spot on the roster. This is also during the time when the Human Torch was wearing a red version of the usually-blue FF costume. The in-story explanation is that the red look is meant to honor the original Golden Age Human Torch, but I'm not sure what the behind-the-scenes reasoning was  (maybe so that each member of this iteration of the FF is wearing a different costume - Thing is Thing, Medusa has her own look, and so Human Torch gets a red suit and Mr. Fantastic the classic blue - instead of just having two members wearing the same thing?).

Creator Central
Chris Claremont is credited as co-writer on this issue, thus giving him claim to a co-creator credit for Madrox (not that he does much with the character in subsquent years, and I believe it is Wein alone who is officially cited as Madrox creator).

The Chronology Corner
Professor X appears here between pages of X-Men #94, though the issue was on sale at the same time as X-Men #92 in November of '74, a full six months before Giant-Size X-Men #1 and eight months before X-Men #94).

A Work in Progress
Madrox seems more or less impervious to any attack which causes him duplicate (ie he is unfazed by the Thing's strongest blows), a facet of his powers that doesn't really stick around (punch him, and he'll duplicate, but the punch still hurts/has a physical impact on him). 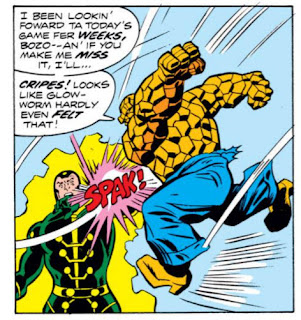 Madrox is shown to have been raised more or less in isolation, left alone first just with his parents, then by himself after his parents die, circumstances that will be mined by later writers when developing his character.

Madrox' duplicates disappear when he's knocked out, a facet of his power that has, a few intentional exceptions aside, stayed consistent through the years.

The issue ends with Madrox leaving with Xavier, though when Madrox next appears, he'll be on Muir Island, and it will be quite some time before he interacts with Professor X again.

That 70s Comic
Jamie's father is said to have worked at the Los Alamos nuclear facility, a holdover from the occasionally-referenced Silver Age idea that mutants were caused by their parents' being in close proximity to radioactivity.

Professor X is lowered from a passing helicopter to the rooftop via "vortex beam", because the helicopter couldn't just land or he couldn't arrive via more ordinary means. 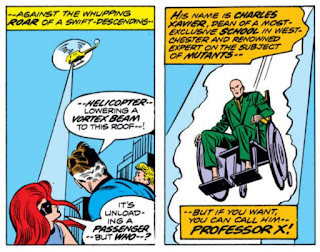 Xavier is also referred to as being the "dean" of the X-Men's school.

Austin's Analysis
Like Wolverine, Madrox's first appearance occurs outside an X-book, and he serves as an antagonist fighting a classic Marvel hero (or heroes, here), despite going on to become a superhero himself. And like Wolverine, much of the character's later hallmarks are absent from his first appearance, as the Madrox presented here is a fairly bland character (even "one-note" seems too generous). But unlike Wolverine, that can't be blamed on the absence of Chris Claremont, as the writer is on hand as co-writer of this issue.

But whereas Claremont, upon receiving stewardship of Wolverine from Len Wein, would, over time and with many collaborators, steadily develop Wolverine into a complex, multi-faceted and extremely popular character, Madrox would be relegated to a handful of background appearances after this, serving mostly as cannon (and Proteus) fodder for a solid two decades. An appearance in Fallen Angels aside, it wouldn't be until the linewide relaunch of the X-books in 1991 and writer Peter David that Madrox really became a character in his own right, that he became distinctive beyond just his (admittedly cool) power and developed a personality.

As a result, this issue is less of a curiosity than Wolverine's appearances in Hulk. It reads less like an attempt to create an interesting new character as it does an attempt to build a character around a strong hook: "hey, let's have the FF fight a guy who makes duplicates of himself! Sounds good, what's his personality? Who cares!" That hook is thus all the character has to hang from in his subsequent appearances, admirably kept alive by Claremont (who rarely lets a character go to waste entirely, no matter how undeveloped he may be or how little Claremont actually uses him) until someone else came along, saw the character's potential, and actually did something with him.