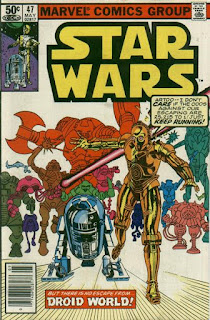 In a Nutshell
Artoo & Threepio run into trouble on a world populated by droids.

Plot
Chased by a hoard of angry droids, Artoo & Threepio find themselves trapped above a massive furnace, prompting Threepio to recall events that led to their current predicament. After accidentally damaging a captured Imperial war droid while examining it, Threepio and Artoo agree to seek the help of Kligson, a reclusive droid expert residing on a moon that has come to be known as Droid World. Kligson agrees to help repair the war droid so long as he can keep it, a deal Threepio accepts because Artoo can simply record the repair work to gain the knowledge they need. However, when they land on the planet, they find themselves in the midst of an Imperial-backed uprising led by Imperial security droid ZX3, and end up poised above the furnace after ZX3 seemingly kills Kligson. However, Artoo & Threepio are saved by Kligson, who faked his death via a robot duplicate, having used the presence of the Rebel droids to confirm his suspicions about ZX3. Kligson proceeds to use the repaired war droid to put down the uprising, and Artoo leaves with the information the Rebellion needed. As Luke flies them away from Droid World, Threepio expresses concern that the Empire will ultimately find Kligson and ruin the peace & solitude he seeks, only to see Droid World itself flying away to a new location.

Firsts and Other Notables
This is the last regular collaboration on the series between Archie Goodwin and Carmine Infantino; Infaninto will draw the next issue, and Goodwin writes #50, but this is the last issue they work on together.

This issue was adapted into a book-and-record storybook, with original illustrations.

The setting of this story is Droid World, a small planet almost entirely populated by droids, a clever idea which, along with the cybernetic Kligson, continues the droids vs. humans theme Goodwin has played with in the past (with characters like Valance). Not surprisingly, it's the kind of "elegant in its simplicity" concept that will lead to similar riffs on the idea down the road (as will the broader idea of a planet that can move about space on its own), with both Droid World and Kligson getting some additional adventures via some secondary Expanded Universe sources (like StarWars.com and The New Essential Guide to Droids). 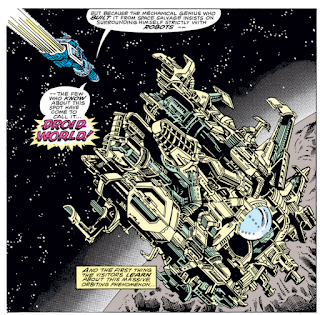 The issue opens in media res, with Artoo and Threepio being chased down a hall that ends in a doorway looking out on a vast smelting facility, an unintentional foreshadowing of a similar scenario in Attack of the Clones.

For what it's worth, this issue is cover-dated the month and year I was born.

A Work in Progress
The now-cybernetic Kligson is said to be a veteran of the Clone Wars.

Remember The Empire Strikes Back?
The AT-AT assault on Hoth is recalled, with a footnote referring to the vehicles by both their technical name and as "walkers". 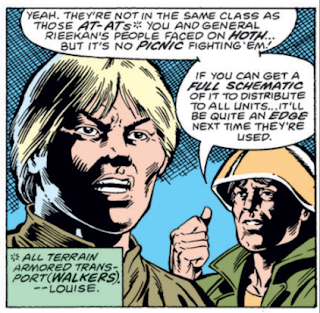 It's in the Mail
A letter writer in this issue theorizes that Leia is the "other" spoken of by Ben and Yoda in Empire, since she, after all, heard Luke's call for help through the Force.

Austin's Analysis
Whether intentional or not, the post-Empire direction of the series thus far seems to be focused on doing one-off, character-specific stories, not unlike what Goodwin did with the series in the late 20s/early 30s. Luke, Lando & Chewie, and now the droids have all received a solo story (with Leia poised to get the spotlight next issue), mostly cutoff from any of the other characters. Whether this is a result of creative changeover triggered by Goodwin's departure, a case of the creative team not having a definitive post-Empire direction for the series yet, or just a desire to slow down and do more focused stories in the wake of the sprawling Empire adaptation, I have no idea. But as much as I'd like to see a more focused direction for the series, I can't deny that overall, it's an effective way to showcase the characters while the series gets itself straightened out.

As for this story, while I've generally never been a big fan of droid-only stories (Artoo & Threepio work much better as a Greek chorus/supporting characters than protagonists in their own right), I can see the appeal of them, especially to creators working in a medium like comics (I'm frankly surprised Goodwin hadn't done a droids-only story before this). This mostly works, thanks to the reveal that Kligson wasn't in on the plot to destroy Artoo and Threepio, and the way the micro plot still manages to tie in to the larger Rebellion vs. Empire plot. Unfortunately, Infantino's art, which I've warmed up to considerably, is a let down here, as both the central characters are often so off-model it's distracting, with Artoo depicted smaller and flatter than he is, and Threepio shorter and stockier. The general novelty of a story that makes protagonists out of Artoo and Threepio is enough to carry the day, for now, but it's another case of an issue that works better in a vacuum than as the latest chapter in an ongoing series.

Next Issue
Leia vs. Vader