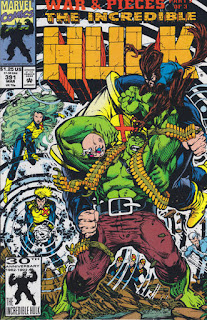 In a Nutshell
X-Factor is called in to stop the Hulk's attack on the nation of Trans-Sabal.

Plot
Issue #390: In Trans-Sabal, Hulk and the Pantheon help a rebel group repel the forces of the country's dictator, Farnoq Dahn. This prompts Dahn to ask CIA operative Galvin for additional assistance from the US, in addition to the equipment they already provided. Galvin proceeds to bring in X-Factor to take on the Hulk. Issue #391: Hulk's friend Rick Jones shows him that the equipment being used by Dahn's forces is from SHIELD, causing him to wonder if they're on the right side of the conflict, but Hulk insists they are. Meanwhile, X-Factor is briefed on the situation and prepares to battle Hulk, despite their dislike of Dahn. Back at the rebel camp, Rick befriends one of the soldiers, convincing him he's on the right side. Later, Hulk launches an attack on Dahn's forces, during which X-Factor intervenes. Hulk is able to mostly hold his own, until Havok is able to absorb some of his gamma radiation, weakening him but also triggering a massive explosion.

Firsts and Other Notables
These two issues begin the "War and Pieces" crossover with X-Factor running here, then in X-Factor #76, and concluding in Hulk #392, as X-Factor battles the Hulk in the country of Trans-Sabal. Similar to the short X-Force/Spider-Man crossover, it's another brief crossover between an X-book and a non-X-book, this time triggered by Peter David's role writing both series.

The Hulk of this era is the merged Hulk, that is, a Hulk who has combined elements of the green, savage, mostly-mindless Hulk, along with the cunning of the Gray Hulk, all under the control of Bruce Banner's mind. At this time, he is working with a rescue-and-relief group called the Pantheon, which is comprised of super-powered individuals with names taken from the significant players in the Trojan War, all of whom are, apparently, descendants of their long-lived leader, Agamemnon (who may be intended to be the actual Agamemnon; I'm a little hazy on my Pantheon history). Somewhat ironically, the Pantheon, at least as depicted in this story (again, I'm fuzzy on the larger history of the group), is the kind of proactive, proto-Authority group that X-Force is constantly said to be, but really isn't.

This story takes place in the fictional country of Trans-Sabal, a Middle Eastern country ruled by a man named Farnoq Dahn (though it seems like Farnoq is some kind of title), which appears here for the first time and will pop up a few more times in various series after this.

Creator Central
Dale Keown, nearing the end of his run on Hulk, provides the pencils, and is inked by Mark Farmer. The art is, overall, quite gorgeous.

A Work in Progress
When told that the Pantheon travels where they want, righting what they see as wrongs, Havok compares them to the X-Men.

Polaris asks if Farnoq Dahn is a blork, Guido's insult-of-choice. 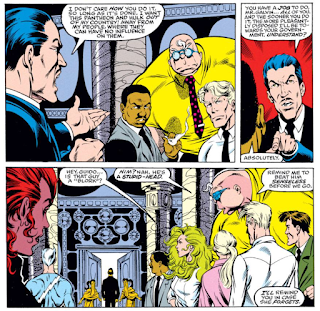 X-Factor's intel on the Hulk is dated; Quicksilver still thinks he's dumb, while Havok remembers his gray incarnation (he was on hand when Wolverine battled the Grey Hulk in Hulk #340).

Hulk, who encountered the original X-Factor during his surly gray days, asks if they know the current group has copped their name. 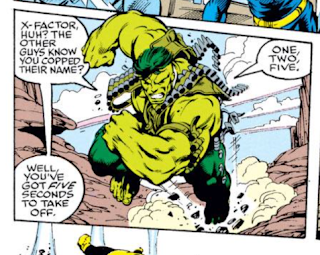 During the fight with X-Factor in issue #391, Wolfsbane gets kicked away from the fight by Hulk'; X-Factor #76 will pickup the story from her perspective after being kicked. 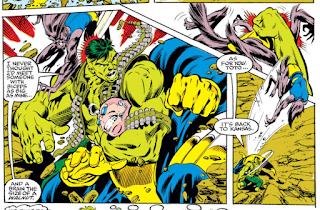 Havok is seemingly able to overpower Hulk by absorbing some of Hulk's gamma radiation to power his plasma blasts. 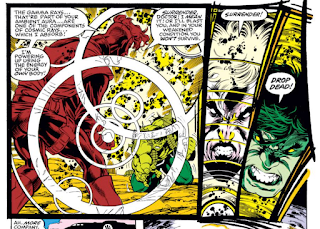 The Grim 'n' Gritty 90s
Presumably in an effort to lampoon some of the trends of the era, Hulk appears throughout these issues wielding comically large guns. 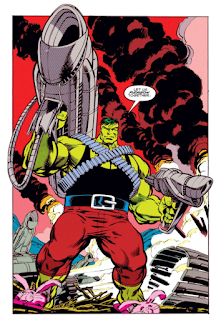 The Reference Section
Rick Jones references Indian Jones and the Last Crusade, and asks Hector if he's seen Terminator 2 yet. 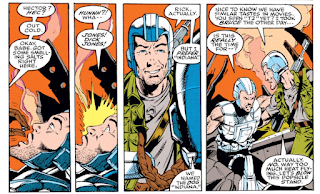 Later, Hulk is compared to both the Teenage Mutant Ninja Turtles and advertising mascot the Jolly Green Giant. 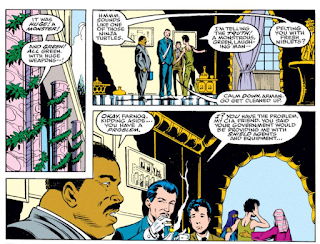 Austin's Analysis
A crossover between Peter David's two regular books, this story is much more a Hulk story than it is an X-Factor one, with most of the tale being told across three chapters of Incredible Hulk to X-Factor's one, but it nevertheless shrewdly uses X-Factor's new status as an official arm of the US government (really, the first story to do so, with the initial five-issue arc in its own book much more about setting up the team and defining the characters). I'm a little hazy when it comes to this specific era of Hulk comics, so I have no idea how much of this is specific to this story and how much is part of a larger, multi-story effort on David's part, but in the first two chapters at least, he is clearing taking shots at the United States' all-too-common (particularly in the Cold War, but even in the immediate post-Cold War world in which this story was first published, and into today) political strategy of shoring up some truly reprehensible regimes to the benefit of the US itself and the detriment of local citizens. At the same time, he's attempting if not an outright satire of, than at least a knowing eyebrow raise at the antihero, guns-a-blazin' tropes of the 90s, featuring as it does multiple instances of the Hulk wielding comically large guns with a take-no-prisoners kind of attitude.

The end result is a story, at least in its first two chapters and from the Hulk's perspective, where X-Factor is cast, if not entirely as the villains, then at least as the unwitting stooges of a morally dubious regime. If this were being written by someone other than their regular writer, it might be cause for concern, but it seems doubtful that David will keep them in that role for the duration of the story, and he's careful to establish that X-Factor is not buying what Farnoq Dahn is selling, even while they go about their stated mission of stopping the Hulk. So for the meantime, it simply adds to the satirical elements of the story, as the mutant team that just participated in a big, high profile, linewide relaunch gets to play the role of chumps for the title character.

Next Issue
Next week: the X-Men's extradimensional adventure ends in Uncanny X-Men #286, Cable gets some backstory in X-Force #8, and we see X-Factor's side of their conflict with the Hulk in X-Factor #76.
Newer Post Older Post Home
Posted by Austin Gorton at 12:00 PM