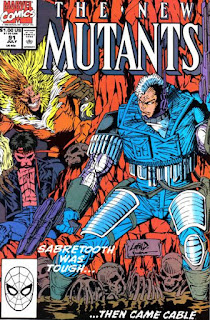 In a Nutshell
The New Mutants rescue Rictor amidst Caliban and Sabretooth's battle.

Plot
Rictor watches as Sabretooth and Caliban savagely fight in the Morlock Tunnels, overcoming his fear to attack Sabretooth on Caliban's behalf. Meanwhile, Cable leads the New Mutants through the tunnels, and they run afoul of Masque and a group of Morlocks. But Cable convinces Masque to allow them to pass, and they quickly manage to track down Rictor. Seeing Rictor injured, they attack both Caliban and Sabretooth, knocking out the former. But Sabretooth manages to escape with Rictor in tow. When Sabretooth threatens to kill Rictor for intervening in his fight with Caliban, Rictor fights through his injuries to trigger a massive earthquake that brings the tunnel crashing down, drawing the attention of the New Mutants. They manage to pull Rictor from the rubble, but Sabretooth escapes as well. Just as the New Mutants prepare to attack him, Masque appears, declaring Sabretooth's fate belongs to the Morlock. 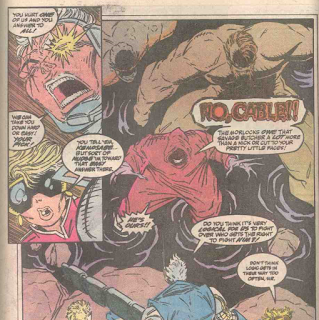 Cannonball and Cable, to Sunspot's outrage, agree, but before the Morlock's attack, Caliban appears, declaring no more will be killed by Sabretooth. They resume their battle, and with the New Mutants watching, Caliban seemingly kills Sabretooth. Later, Rictor is recovering and still not thrilled about Cable, and when he goes to the Danger Room to practice, he finds Cable using it. Impressed by his skills and realizing he isn't asking anything more of the New Mutants than he expects from himself, Rictor starts to think maybe Cable's way isn't so bad, and that while he still doesn't like or trust him, he's beginning to respect him.

Firsts and Other Notables
Fabian Nicieza, who will take over scripting duties on the series from Simonson entirely after "X-Tinction Agenda" on his way to becoming one of the chief architects of the X-Men in the early to mid 90s, fills in as scripter on this issue.

Caliban, who's been something of a fixture in Simonson's titles of late, disappears for a bit after this issue, not turning up again until the start of "X-Cutioner's Song".

Masque, his profile similarly on the rise of late, appears leading a group of Morlocks (ones significantly more brutish than the group of grotesque X-Men doppelgangers appearing in contemporaneous issues of Uncanny). He will become a recurring antagonist for this iteration of the New Mutants and X-Force. 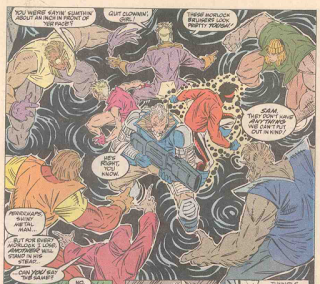 This marks the first time Masque and Caliban have seen one another since the aftermath of "Mutant Massacre", when Masque went back into the tunnels, and Caliban's transformation by Apocalypse.

The next issue blurb teases a story set in Madripoor, though that story won't actually begin until issue #93, with next issue instead handed over to a fill-in inventory story involving Skrulls.

A Work in Progress
In the tunnels, Rahne is tracking Rictor in her full wolf form, yet Cable is somehow able to communicate with her despite Dani not being around to relay.

Cable notes that the New Mutants' teamwork is sloppy. 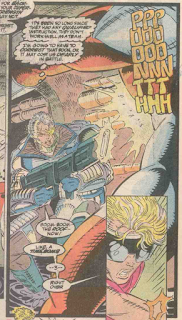 Later, he backs up Cannonball's assessment of the situation, an early hint at their eventual relationship. 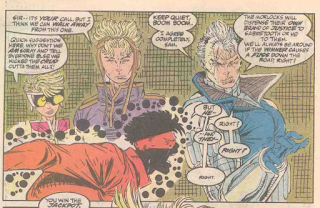 It's implied that during their fight, Caliban breaks Sabretooth's back, killing him. Though, of course, he'll turn up alive and well eventually, which, of course, makes sense given his healing factor. 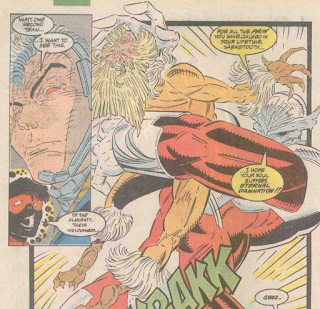 Rahne finally tells Rictor to shut up about Cable, saying he can't expect the rest of the New Mutants to back him up when he won't even tell them *why* he doesn't like Cable.

But watching Cable train in the Danger Room, Rictor develops a grudging respect for him, putting his (still unrevealed) beef with him aide. 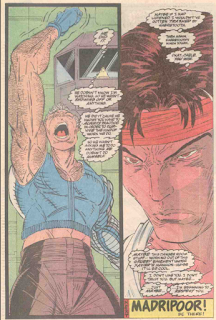 The Grim 'n' Gritty 90s
Boom-Boom dials up the 90s slang in this issue, declaring "no problema" at one point, and calling Cable a bohunk at another.

She also praises the cuteness of Johnny Depp. 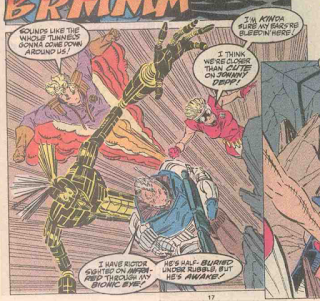 Backgrounds continue to slip, with much of the action in the tunnels playing out against white or heavily hashmarked backdrops.

The Cable Guy
Cable's bionic eye is revealed to have infrared capabilities.

Teebore's Take
Bringing to a close this little two part transition tale setting up the New Mutants' new status quo, this issue gives the team a new set of antagonists in the form of Masque's Morlocks and brings to a close (or at least sets to simmering) the Rictor/Cable conflict. While the latter is resolved a bit quickly and, in retrospect, a bit oddly - in light of what we later learn Rictor's beef with Cable to be, it seems strange that just watching the man he believes killed his father workout in the Danger Room would be enough to convince him to continue working with said killer -  for the most part it works with what was setup in the previous issue.

Plus, of the remaining X-Terminator recruits, though Boom-Boom's made an impression in the series just on the strength of her personality, Rictor, some pinning for Rahne aside, has mostly faded into the background since joining the team (and he wasn't exactly a focal point as part of X-Factor's supporting cast previously, usually getting muscled out by Rusty and, again, Boom-Boom), so it makes sense to build this two-parter around him by making him the lens through which the kids' reactions to Cable are focused. But of course, as was lamented last issue, as effective as this story is at setting up the book's new status and as nice as it is to finally give Rictor the narrative spotlight AND a role in an ongoing mystery (soon to be the X-books bread-and-butter!), it's hard to get too excited about any of this, given how soon it will all be replaced with something else entirely.