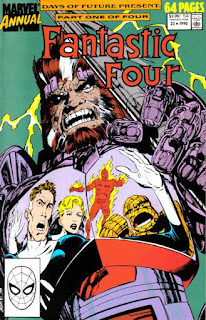 In a Nutshell
Adult Franklin Richards appears in the present, attracting the attention of the Fantastic Four, Forge & Banshee, and the villainous Ahab.

Plot
Returning from a picnic, the Fantastic Four are stunned to discover their Four Freedoms Plaza headquarters replaced by their old Baxter Building. Going inside, they're attacked by the building's defenses, followed by past versions of themselves. Just then, an adult Franklin Richards appears, looking for someone named Rachel. Realizing Franklin is responsible for the changes, Mr. Fantastic tries to convince him everything he's created is an illusion, which prompts a disturbed Franklin to fly off. Everything then returns to normal, but a force field appears trapping the Fantastic Four inside the building. At Excalibur's lighthouse, Rachel Summers experiences a telepathic sensation she thought she'd never feel again, then flies off, telling Meggan this is something she has to do alone. In New York, adult Franklin appears before Banshee and Forge, but realizing they're younger than he remembers, he gets upsets and disappears again. 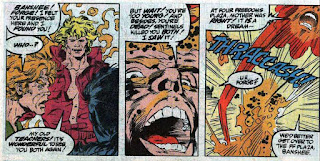 Meanwhile, in a hidden crypt between here and now, Ahab is awakened by reports of Franklin's activities in the past, and dispatches a Sentinel warp attack to stop him. Back in New York, adult Franklin plays with the Power children, while Banshee and Forge make their way to Four Freedoms Plaza. Just then, a squad of small drone missiles appear inside the building, targeting young Franklin. The FF fight them off and destroy the force field to find Banshee and Forge waiting outside. Comparing notes, they realize that adult Franklin is yearning for his childhood, and head to the Powers'. There, Invisible Woman promises to help Franklin, but en route back to Four Freedoms Plaza, he spots X-Factor's Ship. Saying it isn't right, he disappears, forcing the Fantastic Four, Forge and Banshee to split up to find him, and leaving them no closer to discovering who sent the missiles after them or why Franklin came back in time.

Firsts and Other Notables
After two consecutive years in which Marvel turned over the majority of their annuals to a large, line-wide storyline, the 1990 annuals take a different approach: breaking the annuals into smaller groups (when possible, into the existing "family" group, like all the Avengers books or all the X-books), with each group responsible for telling its own story. Same general concept as the bigger crossover stories (if you buy one annual, you'll need to buy more to get the full story), but on a somewhat smaller scale, the end result being a wider variety in stories and quality. It's a model Marvel will continue to use for their 1991 and 1992 annuals, before returning to the "every man for himself" annuals of old with the 1993 books and their "every annual features the debut of a new character (with their own trading card)!" gimmick.

But some series didn't automatically slot into a family of titles (come the mid-90s, Marvel was all about grouping its series into these families, but that was still a work in progress in 1990) and so there's a few odd pairings scattered amongst the four and five part stories. To wit, Fantastic Four gets lumped in with X-Men, New Mutants and X-Factor (because Wolverine and Excalibur, being the more costly "prestige" series, do their own thing for annuals at this point), to round out the X-quartet and give FF somewhere to go. I'm curious if the overall plot of "Days of Future Present", involving an adult Franklin Richards from the "Days of Future Past" alternate future coming to the present was always the plan for the '90 annuals, making Fantastic Four's involvement a no-brainer, or if the story was developed as a way to justify the inclusion of Fantastic Four after it was decided that series' annual would be grouped with the X-books'.

However it came about, "Days of Future Present" marks the first formal sequel to "Days of Future Past". Plenty of elements from that storyline have been revisited since its initial publication, of course (ad naseum, in some cases), most notably the continued presence of Rachel Summers in the present day in Excalibur, but this is the first story to present itself as a direct sequel to it, bringing elements of that future timeline to the present day and expanding our understanding of the world as presented by the original story.

To that end, this issue marks the return of Adult Franklin Richards, who in "Days of Future Past" was a member of the surviving X-Men who escaped the Sentinel concentration camp and was romantically involved with Rachel, but who died en route to the assault on the Baxter Building (which led to the deaths of the remaining X-Men, save Kate Pryde and Rachel). 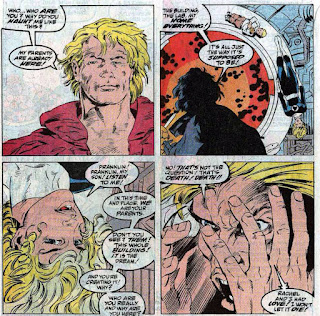 This issue is also the first appearance of Ahab (though he is unnamed here), the cybernetic master of the Hounds, who, we will soon find out, is also tasked with preventing any additional time traveling mutants from altering the past. He is missing one leg and uses harpoons as his weapon of choice. His true identity remains unknown, and will become a minor mystery in the X-books throughout the 90s, with this story later suggesting that he's a possible incarnation of Cable, while Excalibur will do a lot to tease that Rory Campbell (a future member of that book's supporting case), eventually becomes Ahab. For all that, he's a fairly forgotten member of the X-Men rogues gallery today, though that didn't stop him from getting an action figure at one point. 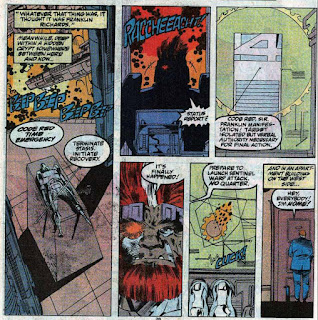 Coming out of the Mr. Fantastic and Invisible Woman-less lineup circa "Inferno", the original Fantastic Four at this point in time have been reunited, though Thing is a powerless Ben Grimm, while She-Thing remains a member of the team (making them, technically, the Fantastic Five, though I suppose the powerless Grimm is considered more of an honorary member at this point).

The Power family (aka Power Pack, whom Franklin is friendly with) appear in this issue as well. 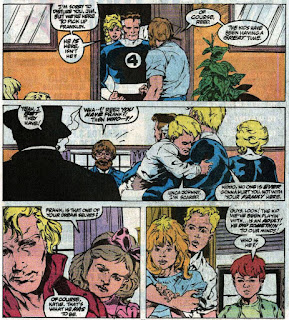 Each issue of this story features a masthead listing all the parts, though each issue erroneously lists New Mutants Annual #6 as being the third part of the story and X-Factor Annual #5 being the second when, in fact, the opposite is true.

In addition to the main story, this issue includes two additional stories, one involving Dr. Doom and Volcana, another Molecule Man and Kosmos.

Creator Central
A pair of former X-Factor pencillers wrote and drew this issue, with Walt Simonson, in the midst of his run as writer on Fantastic Four writing it and Jackson Guice drawing it.

John Byrne provides the cover to this issue.

The Chronology Corner
Forge and Banshee appear in this story between X-Factor #58 and the start of "X-Tinction Agenda" in Uncanny X-Men #270.

Rachel appears here following Excalibur #26 (which itself is set after Excalibur #34) and prior to Excalibur's guest-appearance in Thor #427-429.

A Work in Progress
At this point in time, the Fantastic Four operate out of Four Freedoms Plaza, which replaced the old Baxter Building after it was destroyed by Dr. Doom's adopted son, Kristoff Vernard, in Fantastic Four #278..

Rachel notes that her memories are jumbled, a result of her trip through Mojoworld prior to Excalibur #1. 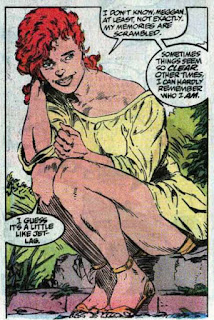 In order to get to the bottom of the mystery surrounding Adult Franklin, Mr. Fantastic removes the mindlocks holding Franklin's power in check. 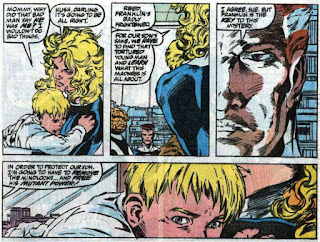 Teebore's Take
I've probably only read the entirety of "Days of Future Present" once before, so I'm not as familiar with this story as with most of the others around this time. To that end, it was surprising just how much of a genuine "chapter one" this issue is - it's almost entirely all set up for the rest of the story, introducing the initial mystery (adult Franklin), the overall villain (Ahab) and laying the groundwork for the expansion of the story (Phoenix flying off to New York, Adult Frankling targeting X-Factor's ship). Which, of course, is what a good first chapter should do, but it's still surprising just how much of this issue is handed over to setting up a story that will unfold in three other books with only the most tangential of connections to Fantastic Four.

Granted, the FF will continue to appear in those chapters, and any story involving an alternate future version of their son should feature their involvement, but this issue represents their biggest chance to shine, and aside from a fairly routine "new FF vs. old FF" fight scene, there's not a whole lot here for Fantastic Four fans - the issue doesn't even end on much of cliffhanger. Just the FF saying "yep, we sure are going to figure out what's going on" after Adult Franklin disappears. As the first chapter of "Days of Future Present", this works just fine, then. As a Fantastic Four annual in and of it's own right, probably not so much.

Maybe at this point Marvel figured the bump they'd get from X-book readers picking this up was greater than or equal to the FF fans who could care less about seeing their characters get roped into a story to which they're only tangentially connected in the first place. In terms of serving the story, diving in and not worrying about placating those fans is probably the right decision, but it's still, for 1990 at least, a bit of a curious one nonetheless, a decision that somewhat heralds the upcoming era in which everything is subservient to the whims of the crossover du jour.