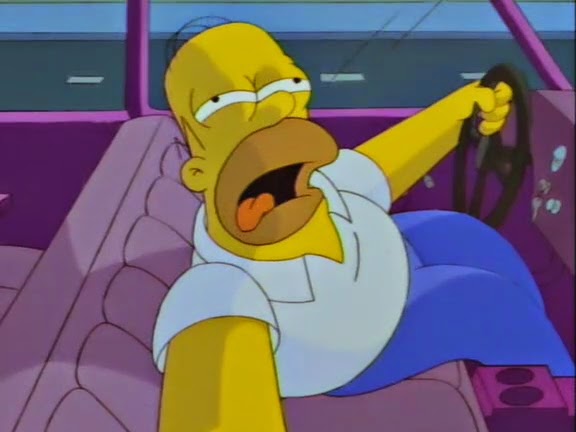 Or the One Where
Homer is accused of sexually harassing the kids' babysitter.

The Setup
After losing the rare gummi Venus De Milo he stole from the candy convention, Homer discovers it stuck to the babysitter after he takes her home. But when he retrieves the candy, the babysitter is left thinking he was trying to grab her ass.

Notable Notes
Rock Bottom, the sleazy tabloid show Homer goes on to try and clear his name, is a fairly direct parody of Hard Copy, though it stands as a parody of pretty much all those kind of tabloid-based "news" shows in general that were all the rage in the 90s before being mostly replaced by the internet.

Future King of the Hill, The Office and Parks and Recreation co-creator Greg Daniels wrote this episode. 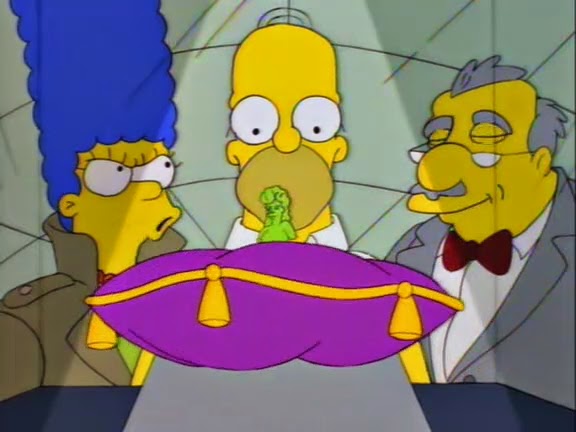 Quotable Quotes
Conventioneer: Hey, sir! Try our wax lips: the candy of 1000 uses.
Homer: Like what?
Conventioneer: One: a humorous substitute for your own lips!
Homer: Mm hmm, keep going.
Conventioneer: Two: er...ooh, I'm needed in the basement!

Ashley: You grabbed me in the car!
Homer: Oh, that. No, I was just grabbing a gummi Venus de Milo that got stuck to your pants.
Protestor: Yeah, right. That's the oldest excuse in the book!

Kent Brockman: This is hour 57 of our live, round-the-clock coverage outside the Simpson estate. Remember, by the way, to tune in at 8:00 for highlights of today's vigil, including when the garbage man came and when Marge Simpson put the cat out...possibly because it was harassed, we don't know.
Of course, there's no way to see into the Simpson home without some kind of infrared heat-sensitive camera. So, let's turn it on...now, this technology is new to me, but...I'm pretty sure that's Homer Simpson in the oven, rotating slowly. His body temperature has risen to over 400 degrees -- he's literally stewing in his own juices.
Now, here are some results from our phone-in poll: 95% of the people believe Homer Simpson is guilty. Of course, this is just a television poll which is not legally binding, unless proposition 304 passes. And we all pray it will.

Marge: There are only 49 stars on that flag.
Abe: I'll be deep in the cold, cold ground before I recognize Missourah!

(The standout sequence from this episode is Homer's heavily-doctored interview on Rock Bottom, but it just doesn't translate as well into print, and the internet failed to provide a good clip of it for linking purposes). 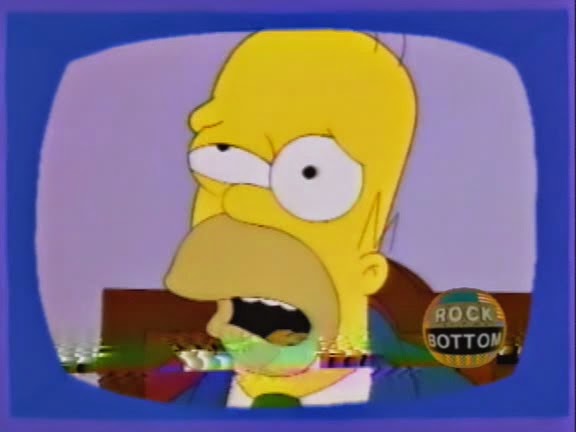 Teebore's Take
Another easy candidate for the show's Hall of Fame, this episode segues from an absolutely fantastic opening act into a scathing examination of the tabloidization of the media, its obsession with turning even the smallest of infractions and/or minor misunderstandings into a sensational and salacious story, truth be damned, and how we, as a society, still can't seem to turn away even when we know better (there's also some material about conflicting views of feminism, which is what Daniels originally pitched the episode to be about, but most of that quickly takes a back seat to the larger issues of media-inflamed scandals). It's social commentary that is, sadly, as relevant today as it was in 1994, and that it all springs forth from Homer innocently retrieving a stolen masterpiece of gummi confectionery is just so brilliantly Simpsons.

The Candy Convention sequence alone earns this episode a place in the "all time great" discussion; the hilarity and social commentary that follows confirms it. 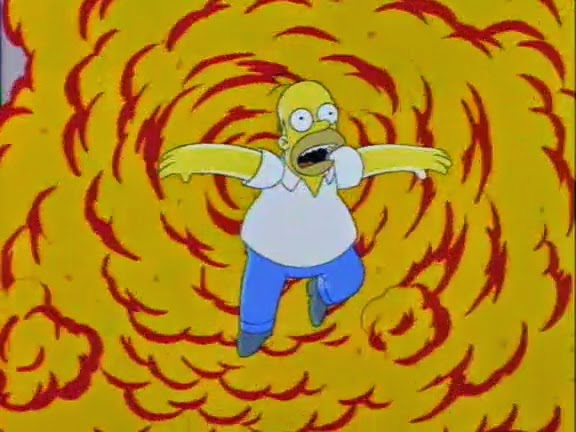