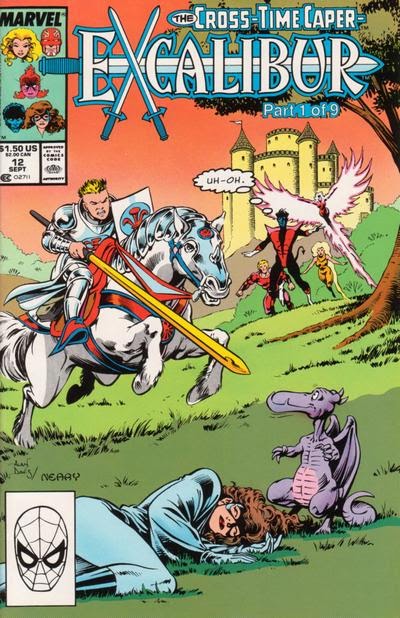 In a Nutshell
Excalibur is transported to a fantasy world.

Plot
As a young lord on horseback rides through a forest in search of a knightly quest, a train suddenly appears as if from nowhere and crashes nearby. At the crash site, the lord finds an unconscious Shadowcat having been flung from the train, and Lockheed hovering nearby. Immediately smitten with Shadowcat and believing Lockheed to be a threat, he attacks the dragon. Lockheed, however, drops a tree branch on the lord, knocking him out as the rest of Excalibur, as well as Alistair Stuart, emerge from the train. Back on Earth, Nigel Frobisher meets Technet in Brighton to enlist their services, but he's transformed by Joyboy into his heart's desire, a weird amalgamation of a perfect man and Courtney Ross. Meanwhile, the young lord regains consciousness surrounded by Excalibur. He introduces himself as William, heir to the throne, but says his friends call him Billy the Kid. 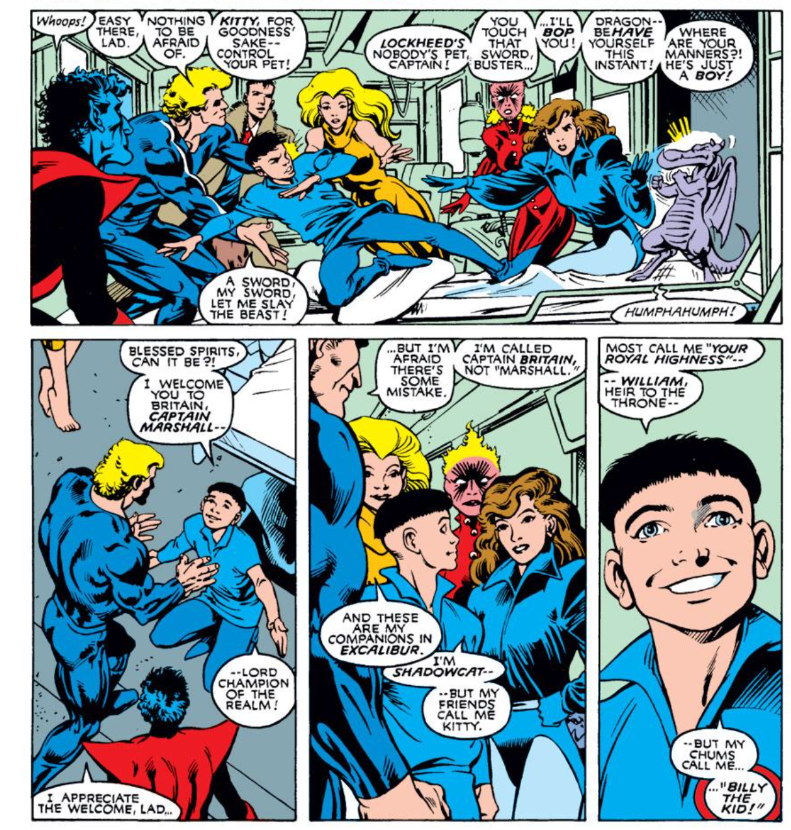 As Shadowcat, Phoenix and Alistair examine Widget in the hopes it can bring them home, the train is attacked by a demonic shaitan, who captures Shadowcat and brings her to its master, an ogre named Butch. He imprisons Kitty alongside a princess, but Excalibur tracks her down. As Captain Britain battles Butch, Phoenix grapples with an elemental being protecting Butch's castle and Billy frees Kitty and the princess. In the wake of the fight, Butch's castle collapses due to the damage it sustained, and though the princess is pleased to be rescued by a prince, Billy rebuffs her, instead proposing to Kitty and asking her to rule by his side as queen of the realm.

Firsts and Other Notables
This issue marks the beginning of the "Cross Time Caper", which will see Excalibur journey to an assortment of alternate realities and times before returning home, and though the cover declares this part 1 of 9, the story ends up running even longer than that, all the way out to issue #24.

The first world they come across isn't too unlike their regular world, only with the high fantasy elements dialed up significantly. 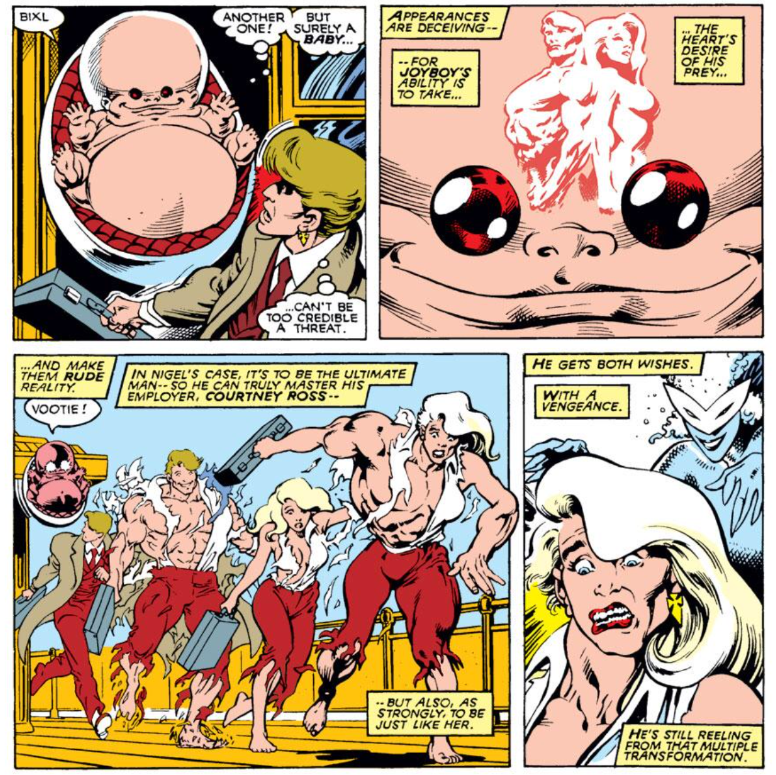 A Work in Progress
Meggan feels an immediate connection to the new world, like she's come home. 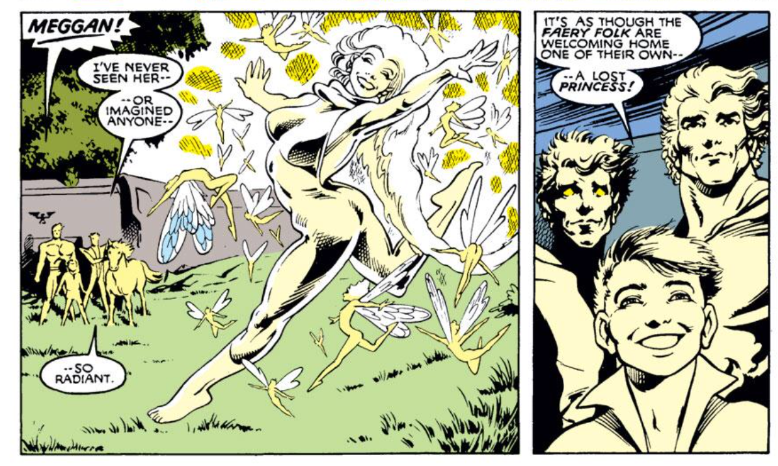 Nightcrawler teleports with a passenger, though the effort nearly kills him. Billy, however, is unaffected by the strain.

The Reference Section
Billy the Kid is obviously a reference to the famous American outlaw of the same name, but I'm not sure what, if anything, Claremont is going for with using the name here, other than the obvious "Billy is short for William, he's a kid, Billy the Kid is a name people are familiar with, so I'll call him Billy the Kid" thought process.

Artistic Achievements
Davis does a fantastic job of depicting Lockheed's personality just through his body movement on this page (I particularly like the way he tucks his tail up to avoid the sword strike). 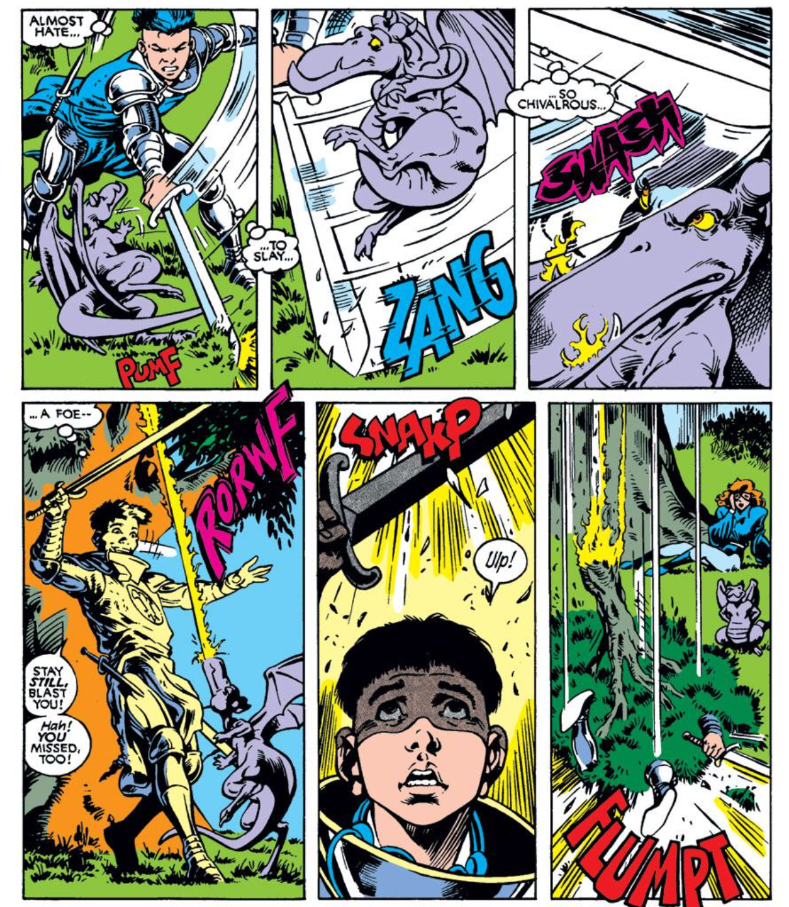 Young Love
Prince William is immediately smitten with Kitty, and ends the issue proposing to her.

Kitty, meanwhile, is still enamored of Alistair, and the Kitty/Alistair/Rachel triangle continues apace. 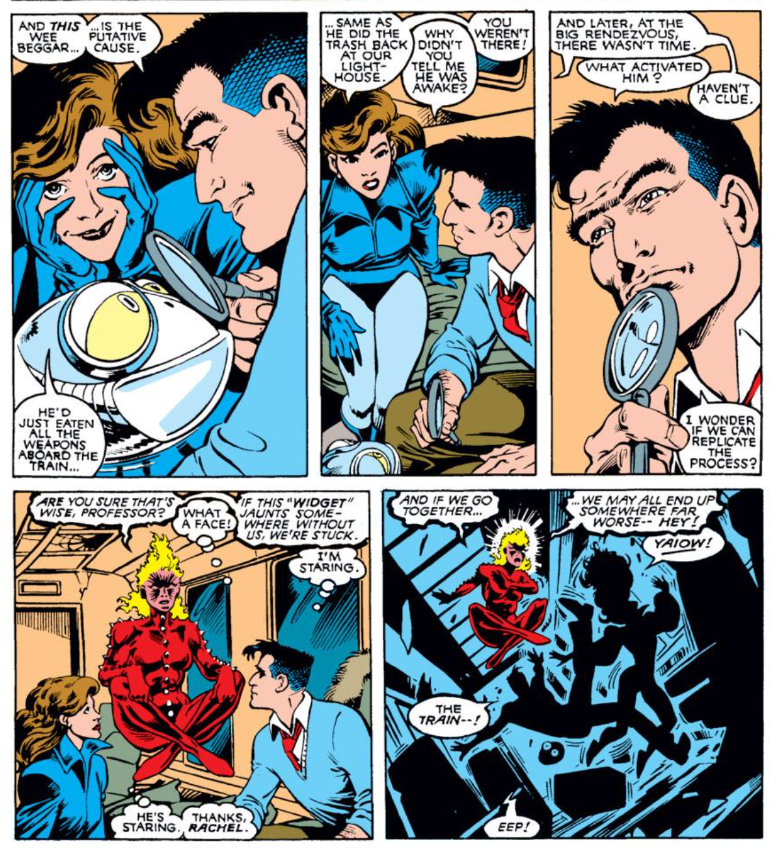 Teebore's Take
This issue kicks off "The Cross Time Caper", Excalibur's entry in the 1989 multi-part storyline bonanza. It drops the cast into a world not unlike their own, but with fantasy/Arthurian elements in full swing. It's logical starting point for a story that will see Excalibur sent across multiple alternate realities, given the series' origins and ties to English mythology. Davis and Neary are back on art, which helps immensely, injecting a sense of fun and whimsy into this alternate world. Claremont is playing around with several different romantic relationships, which is always a strong element of his work. And, in a surprising development, he even continues the "Kitty thinks she's an Ugmo" character bit begun last issue, making her the object of affection of the young prince, even in the face of her other teammates. The end result is what has become a familiar refrain for these '89 stories: a strong start (even if the story as a whole ends up running far too long). Claremont is firing on all cylinders, Davis is back, and for now, this is all just good fun.

Next Issue
Tomorrow, "The Gehenna Stone Affair" begins in Wolverine #11, continued on Friday in Wolverine #12. Next week, the X-Men return to the Savage Land in Uncanny X-Men #249.
Newer Post Older Post Home
Posted by Austin Gorton at 12:00 PM