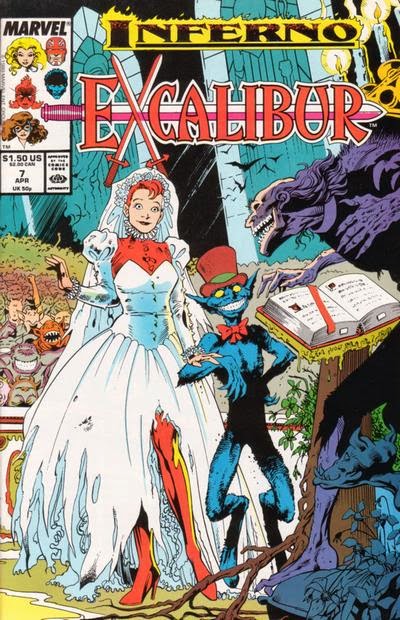 In a Nutshell
Excalibur is consumed by Inferno.

Plot
In the transformed Manhattan, Crotus comes across the mannequin-like Rachel, frozen in place inside a bridal shop. Recognizing her as Phoenix, Crotus begins to enact a spell to bind her power to his will, through which he can rule everything. Meanwhile, inside the demonic movie theater, Shadowcat battles a possessed Captain Britain, their action movie trappings eventually changing, with Captain Britain becoming a horror movie monster and Shadowcat a cheerleader. Elsewhere, Nightcrawler is scooped up by demonic garbage truck, but manages to escape, then helps leads a defense against an army of possessed mannequins as Shadowcat comes face to face with Meggan the Goblin Princess. 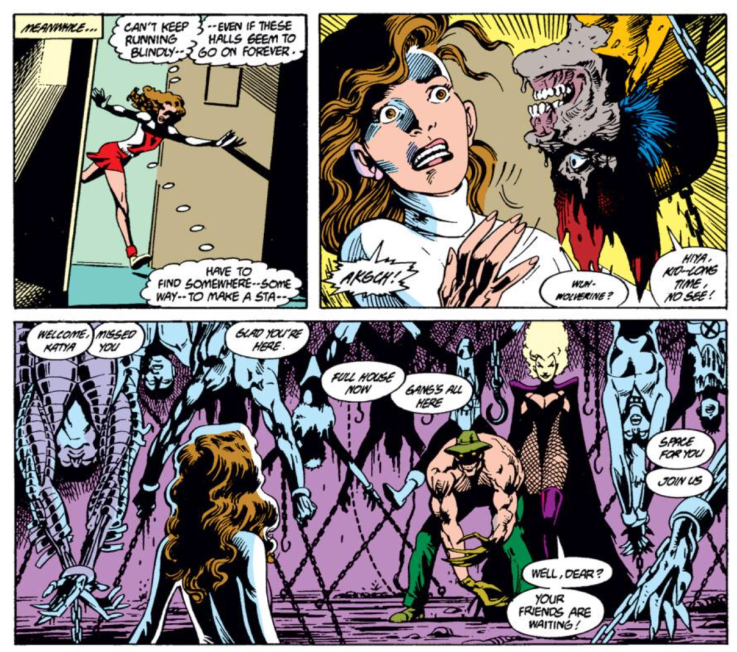 Spotting a mannequin wearing Phoenix's costume, Nightcrawler realizes what's happened to his teammate. Back at the bridal shop, Crotus begins casting his spell in the form of a wedding to Rachel. Elsewhere, Shadowcat suddenly manifests Illyana's armor and Soulsword and, using the sword, is able to free first Captain Britain and then Meggan of their enchantments. At the bridal shop, Nightcrawler intervenes just as Crotus' spell is about to finish, disrupting the wedding and freeing Phoenix. Now back to normal, Captain Britain assures Meggan neither of them were acting like themselves while enchanted, though Shadowcat worries the spells merely twisted and magnified pieces of each them. Elsewhere, a defeated Crotus searches for his master.

Firsts and Other Notables
Towards the end of the issue, Shadowcat suddenly manifests Illyana's armor and Soulsword, just as she did when the Beyonder briefly killed Ilyana (and the rest of the New Mutants) during Secret Wars II. Kitty doesn't know it yet, but that's because Illyana has been killed/ceased to exist as of New Mutants #73. The full ramifications of this will be explored more fully next issue. 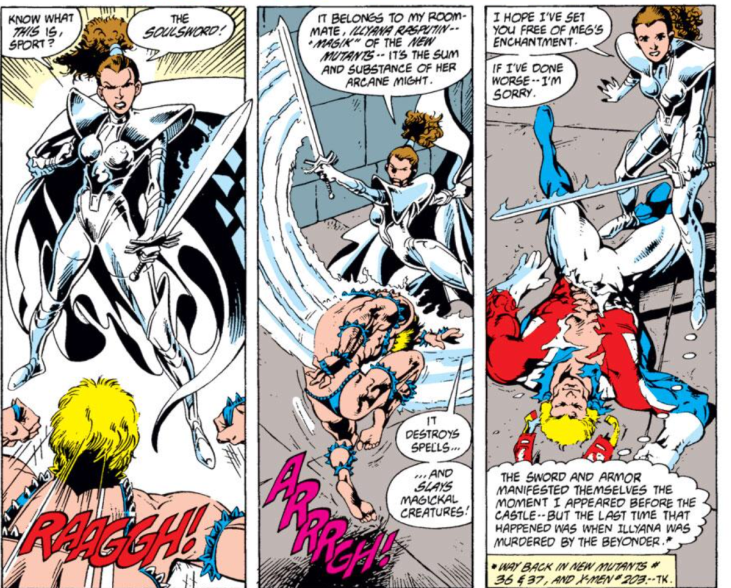 This issue features a wraparound cover.

The Chronology Corner
Crotus appears here prior to his appearance in Cloak & Dagger #4 and after X-Terminators #4 (when he was burned and blackened). This issue (or, at least, its closing pages) runs parallel to New Mutants #73, with Kitty receiving Illyana's armor and sword after she sacrifices herself.

A Work in Progress
It's unclear if the Grimoire  Crotus uses in this issue is the same book as the Belasco spell book he uses in Cloak & Dagger #4. I like to think it is. 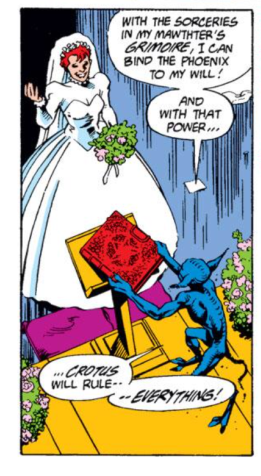 Shadowcat does worry that something has happened to Illyana once she manifests her armor, thinking that her loss on top of everyone else would be too much to bear.

The Reference Section
The Inferno-possessed Captain Britain morphs into a Nightmare on Elm Street/Friday the 13th Freddy/Jason amalgamation at one point. 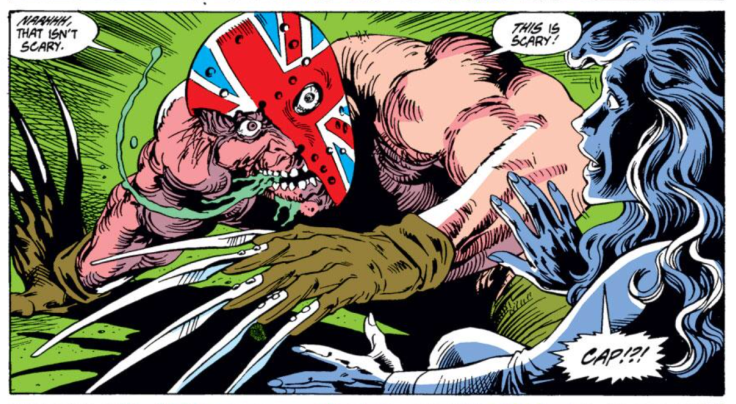 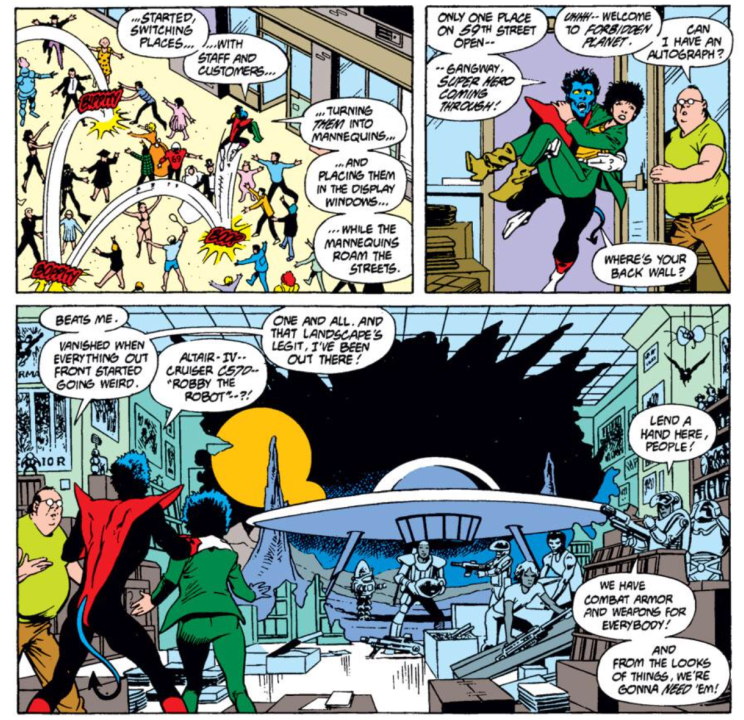 Teebore's Take
Kind of a ho-hum issue. Granted, Alan Davis at least makes it fun to look at and helps elevate it above the level of the standard "Inferno" tie-in fare, but story-wise, it's little more than a routine crossover tie-in. Despite featuring the best friend of Illyana Rasputin (the central figure of New Mutants' portion of "Inferno"), as well as the sort-of sister of baby Christopher and the sort-of daughter of Madelyne Pryor (two significant characters in the X-Men/X-Factor storyline), AND despite those relationships serving as the impetus for this book's entrance into the crossover last issue, the bulk of this issue is little more than a standard "Excalibur fights demons and the effects of 'Inferno'" story. While that sort of tangential connection is all well and good for an issue of Spectacular Spider-Man or Daredevil, for what is ostensibly an X-book with at least two of its main characters having strong ties to characters involved in the crossover's larger narrative, this should be more than just a routine (though superbly drawn and mostly entertaining) tie-in issue.

Next Issue
Tomorrow, the Madripoorian gang war continues in Wolverine #6. Next week, the X-Men go to the mall in Uncanny X-Men #244, followed by the New Mutants' confrontation with Magneto in New Mutants #75.
Newer Post Older Post Home
Posted by Austin Gorton at 12:00 PM