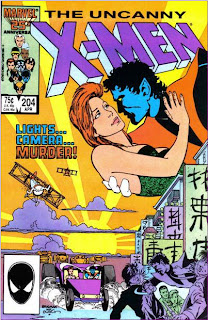 "What Happened to Nightcrawler?"
April 1986

In a Nutshell
Nightcrawler rescues a woman from Arcade.

Plot
At Amanda Sefton's New York apartment, Nightcrawler broods about his encounter the Beyonder and the fact that he was left behind when the other X-Men were taken to San Fransisco. He admits to Amanda that he was glad to be left behind, so as not to face the Beyonder again, and yearns for the X-Men's old life of simple adventure. Though Amanda tries to help him snap out of his funk, he angrily rebukes her, driving her away. Alone, he spies one of Arcade's garbage trucks capturing a new victim, and follows the truck to Murderworld. Sneaking inside, he stops to adjust the security sensors, rendering him invisible until Arcade physically sees him. Arcade's victim, a woman named Judith, awakens in Murderworld and does her best to survive its traps, but is eventually rescued from a robotic shark by Nightcrawler. 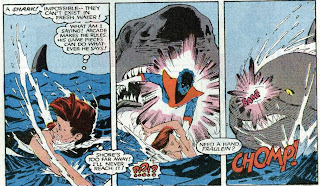 Together, they fight their way through Murderworld until Nightcrawler seemingly abandons Judith. Just as she's about to be attacked by a group of Arcade's robots, Nightcrawler turns up again and saves her. Just then, the X-Men burst into Arcade's control room and overpower him before he realizes they are his own robots, reprogrammed by Nightcrawler during the time he left Judith alone. Nightcrawler and Judith escape, and Nightcrawler escorts her home, his confidence in himself and his role as a hero restored thanks to their adventure. Arriving at her apartment, they find two men waiting for Judith, a state department official and a member of the Ruritanian guard, who announce that she is the queen of Ruritania.

Firsts and Other Notables
This is the first appearance of Judith Rassendyll, the queen of Ruritania, though it barely counts as notable, as she only pops up again in issue #206 (when Nightcrawler bids her farewell), and is essentially little more than a plot device which allows Nightcrawler to regain his confidence.

Nightcrawler and Amanda more or less break-up this issue, as Nightcrawler wonders whether Amanda is using magic to make him love her, something he quickly regrets while realizing he only said it to hurt her, yet he doesn't call her back or chase after her after she storms out. Though the pair eventually reconciles in future stories, they will remain apart for the foreseeable future.

For whatever reason, Cyclops' head is back in the corner cover box.

A Work in Progress
It's noted that the X-Men will be home soon from San Fransisco, though that won't happen until issue #207.

Nightcrawer recalls his adventures from his limited series, yearning to once again be caught up in that kind of adventure.

Later, he explains to Amanda how his encounter with the Beyonder has shaken his faith and his role as a hero. 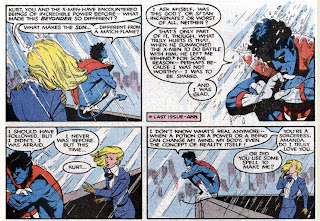 Arcade once again uses a garbage truck to capture his prey, with the old "sflanng" sound effect drawing Nightcrawler's attention. 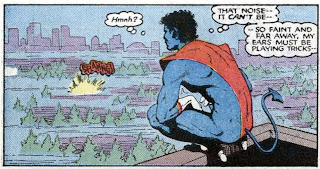 Nightcrawler notes that after each of the X-Men's tussles with Arcade, they anonymously alerted the authorities to investigate the theme park entrance/exit to Murderworld, but they've never been able to find anything. 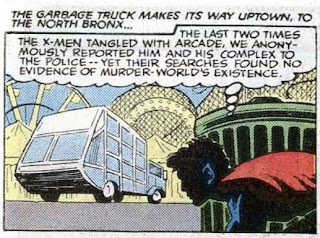 In a callback to his technical skills, Nightcrawler notes that while he's not the electronics whiz Kitty is, his work with the Blackbird's systems has afforded him some electronic know-how. 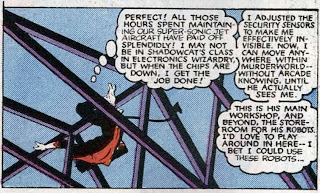 During his battle with Arcade, Nightcrawler waxes philosophical on how the X-Men lately seem to be fighting a never-ending trench warfare, one that is grinding them down and making it difficult to feel like they're doing any good.

I Love the 80s
Judith recognizes 19th century Hussars on sight, as I'm sure all of us could.

For Sale
This issue contains an ad for the second G.I. Joe Yearbook, that series version of an annual. 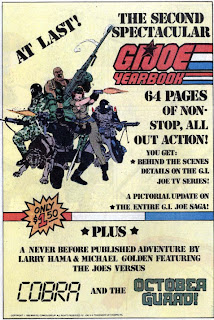 Teebore's Take
I've never been a terribly big fan of this issue. Though a case can be made that it's not a fill-in issue (it deals with the fallout from the X-Men's encounter with the Beyonder, Claremont's been on a kick of standalone issues starring solo X-Men of late, few of the stories in the Claremont/JRjr run are set in traditional story arcs anyway), this has always nonetheless felt like a fill-in. Part of that, granted, is the absence of Romita Jr., making the art, at the very least, a technical fill-in (though it is rather enjoyable). Though similar in style to the other solo stories of this era, this issue lacks the something the others have: issue #182 delved into Rogue's mental condition, issue #197 dealt with Colossus and Kitty's relationship, something that's been around longer than Nightcrawler's Beyonder-inspired crisis of faith (also, even though it had JRjr on art, frankly it is the issue that comes closest to matching this one's fill-in feel), issue #198 was a thematic sequel to "Life Death" and featured impressive art, and issue #205 is just really good.

This issue, meanwhile, features Arcade (again), any threat he once posed effectively eliminated by this time, and a one-off supporting character that barely rises above the level of a generic damsel in distress. Aside from Nightcrawler reclaiming his heroic mojo, nothing of significance to the overall development of the characters, themes or plots of the book occurs. To be clear, this isn't a bad issue, by any means (it's head and shoulders, in terms of the writing, art, and characterization, above any contemporaneous issue of X-Factor, for example), and it effectively sells the idea of Nightcrawler being reinvigorated by a sweeping, swashbuckling but relatively straight-forward adventure. It just feels very inconsequential, the first issue of X-Men in a long time that you could skip without missing out on either any significant narrative developments or a really good story.

Next Issue
Tomorrow, the New Mutants acquaint themselves with their new school in New Mutants #39, while on Friday Beast undergoes a transformation in X-Factor #3. Next week, Wolverine gets the spotlight in Uncanny X-Men #205.
Newer Post Older Post Home
Posted by Austin Gorton at 12:00 PM