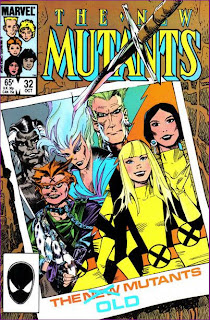 In a Nutshell
The New Mutants track Karma to Madripoor.

Plot
In California, Roberto recalls the events which led to Karma's seeming death, blaming himself and his failure to save her for her current condition. Sam arrives, and together they join the rest of the New Mutants aboard a plane. En route to their destination, Doug briefs them on the extent of Karma's criminal activities, gleaned from various computer searches. Arriving in the Pacific island nation of Madripoor, Amara creates a distraction that allows the New Mutants to sneak through customs. They track Karma to a mountaintop villa, and that evening storm her stronghold, leaving behind Doug and Warlock as backup. Karma quickly ensnares most of the team, but Illyana manages to resist long enough to teleport away with Dani. Returning shortly thereafter with a cadre of demons in tow, they find the villa deserted, Karma and their teammates gone. 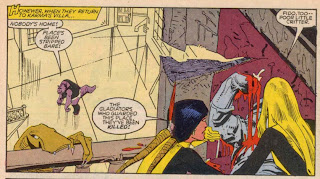 Deducing that Karma has fled to another base of operations in Cairo, Illyana attempts to teleport there. Though she and Dani make it to Cairo, they arrive in the past, in the time of the Pharaohs, where they encounter an ancestor of Storm. She uses her magical abilities to help guide Illyana closer to their goal, but this time she overshoots their target. They end up some time in the future, where their teammates remain depraved thralls of Karma. After one more jump, they finally arrive in the correct time, but Dani is despondent in the face of Karma's power and the future they experienced. Suddenly, they are joined by Warlock and Storm. Though Doug was captured by Karma during the New Mutants' initial assault, Warlock escaped and followed his teammates to Cairo, where he sought out Storm. Storm says she knows something of their foe, and will understand if they want to give up the fight due to the odds against them. But when she admits that she will stay and fight anyway, Illyana and Dani agree to do the same.

Firsts and Other Notables
The island nation of Madripoor appears for the first time in this issue. It is described by Doug as being like Mos Eisley (from Star Wars) and the real-life one time pirate haven, the island of Tortuga, a place with no extradition laws where criminals of all sorts come to hide or setup shop. It will become a mainstay of the X-books, especially in stories involving Wolverine.

In the wake of Bill Sienkiewicz's departure, Steve Leialoha, by now no stranger to the X-office, fills in as guest artist, both pencilling and inking the issue. He'll stick around for the duration of this three part story.

The Chronology Corner
This story takes place after Uncanny X-Men #198, with Storm appearing here following the events of that issue. 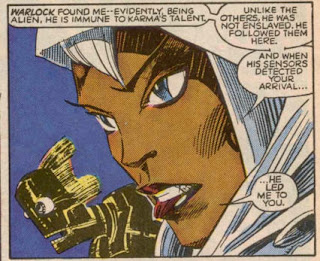 A Work in Progress
The New Mutants have somehow booked themselves onto a commercial flight to Madripoor, and though they mention wondering if Professor X will be mad when he gets the bill, it's not clear exactly how they paid for it, nor why that method worked when they previously had to pool their own money to buy bus tickets to the Massachusetts Academy (it's also not mentioned how the faction of the team that was on Muir Island, with Professor X, managed to rendezvous with the group in LA without Xavier intervening).

It's revealed that Karma has pinned all the criminals actions of the Gladiators on her uncle, General Coy, which pays off her brief mention of him being insurance in issue #30. 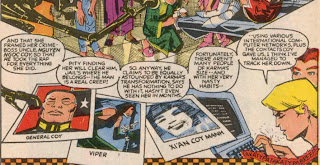 Roberto says he still bears the scar of his time in the Gladiator arena, which, considering that was only a few days ago at most, is less dramatic than he's making it sound.

Dani mentions that Roberto has been especially short-tempered since his encounter with the Beyonder. However, Roberto has yet to meet the Beyonder, as he stayed behind in the arena with Amara when the rest of the New Mutants confronted the god-like being in Secret Wars II #1.

It's revealed that Karma has brought along some of her former Gladiators to serve as her security force in Madripoor. 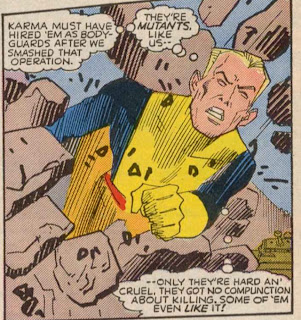 As with Xavier's telepathy, Illyana is naturally resistant to Karma's power. It's established that Warlock is immune to her power as well. 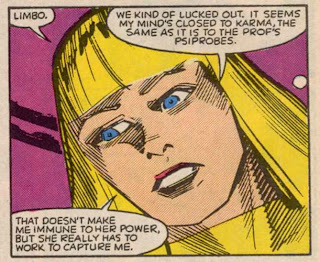 Illyana enlists the help of S'ym, as well as some other Limbo demons, to help in the fight against Karma.

In something that smacks of narrative convenience, after Illyana inadvertently teleports herself and Dani back in time, she is not able to immediately teleport again as her "batteries" have been drained, something she's never experienced before, nor, as far as I can recall, ever again. 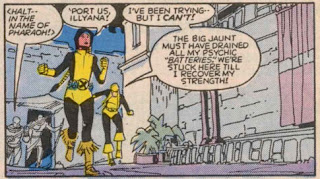 Further hints at Storm having some connection to sorcery occur in the form of Dani and Illyana meeting an ancestor of hers with magical abilities.

I Love the 80s
At one point, Dani is forced to use her power to make a stewardess think the New Mutants are all asleep on the plane. The notion of a stewardess checking on teenaged passengers, and said passengers apparently having an entire section of a commercial plane to themselves, seems very old fashioned (if not entirely fictional). 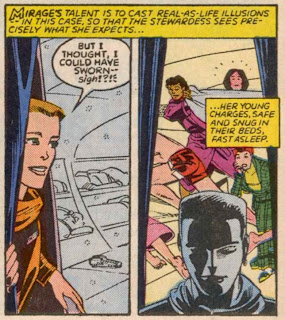 Also, Doug is somehow able to both (presumably) hack into a variety of computerized databases to gather information on Karma's criminal activities in this pre-internet day and do so at least partially whilst in mid-air aboard a commercial jet.

Though Warlock was able to look fully human in New Mutants Annual #1, here he is seen practicing taking human forms, including one whom I believe is supposed to be Michael Jackson and another...some kind of Muppet?

"Professor Xavier is a Jerk!"Roberto continues to rage against Professor X, refusing to believe he couldn't have known the truth about Karma's fate, and that he deliberately held it from the New Mutants.

They're Students, Not SuperheroesRoberto wonders why the New Mutants even bother fighting, considering they're all just kids, and though he insists on sticking around to help Karma, after that he's not sure.

Teebore's Take In the past, when Claremont has lost a strong artistic collaborator, it has sometimes taken him awhile to regain his footing (most notably, John Byrne's departure seemingly left him reeling well into Dave Cockrum's second run). However, for whatever reason, Claremont hits the ground running in the wake of Bill Sienkiewicz departure (perhaps because Sienkiewicz was never as much of a plot-contributor as Byrne was, or because Claremont believed Sienkiewicz would be back, or some other reason). Though the perfectly-acceptable fill-in art from Steve Leialoha lacks the energy and dynamism of Sienkiewicz, Claremont hardly seems to notice, picking up the plot thread left dangling from the last story and launching the kids into a hunt for their former friend turned apparent villain.

Though this story will continue for two more issues, this issue has a surprisingly brisk pace. It moves quickly, dropping the kids into Madripoor and an over-matched fight with Karma before the halfway point, then sending Dani and Illyana off on a variation of their adventure during the earlier Hellions story arc. This use of the book's history, as well as the novelty of seeing the full team together (for a bit, at least) for the first time since issue #21/the first annual, helps elevate this issue slightly above "genre standard" in a way the issues of the previous story never quite did. It is also helped by building off and finally addressing a significant event from the book's past and the fate of one of its original, long-missing characters.

Next Issue
Storm stars in "LifeDeath II" in Uncanny X-Men #198, then helps Dani, Illyana and Warlock against their teammates in New Mutants #33.
Newer Post Older Post Home
Posted by Austin Gorton at 1:00 PM