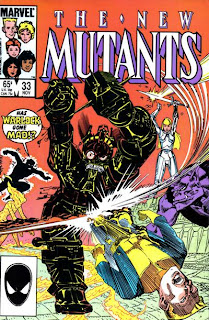 In a Nutshell
Dani, Illyana, Warlock and Storm attempt to free their friends from Karma's possession.

Plot
At her nightclub in Cairo, Karma and the possessed New Mutants toy with the patrons until they're interrupted by the sudden arrival of Storm. Karma recognizes Storm, and Storm tells her she knows who she really is, and declares her intent to put an end to her once and for all. The New Mutants attack Storm, but Illyana and Dani join the fray. Using her psychic link with Rahne, Dani is able to free her teammate. Summoning an image of Karma's greatest fear to buy time, the unpossessed New Mutants flee with Warlock's assistance. They arrive at Storm's old neighborhood and attempt to plan their next move as Rahne comes to terms with her actions while possessed by Karma. Suddenly, Karma's thralls attack, and the New Mutants are forced to fight one another.

In the midst of the battle, Illyana suddenly teleports Dani back to Karma, allowing Karma to possess Dani as well as Rahne. Illyana returns to the scene of the fight and grabs Warlock, taking him to Limbo and leaving him in the care of S'ym. From S'ym, Warlock learns of Illyana's past in Limbo. Back in Cairo, Illyana is confronted by the possessed Dani and Rahne but Karma, speaking through them, leaves her be, believing that Illyana has willingly sided with the villain. The possessed New Mutants track down Storm, who holds her own against them until Illyana arrives and teleports her away. However, Illyana delivers Storm to Karma, who takes control of her as well. Watching from Limbo, Illyana hopes her gamble will pay off. Suddenly, she's confronted by Warlock, who calls her a traitor, declares that she is as evil as Karma, and thus will share the same fate.

Firsts and Other Notables
Honestly, for perhaps the first time, I can't think of anything terribly notable about this issue. It's the second part of a three part story, Storm is still guest-starring, Leialoha is still the fill-in artist. That's about it.

A Work in Progress
When Dani uses her power on Karma, the thing she fears the most is Professor X, a hint at her true identity. 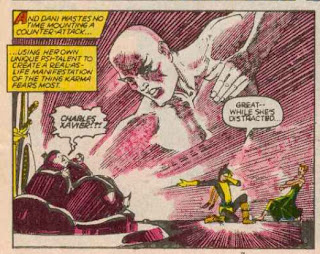 Warlock, who hasn't had a lot to do in his previous appearances, really amps up the schtick in this issue, tossing "selffriends" and "oncefriends" around with abandon, referring to eyes as "occular sensors", etc. 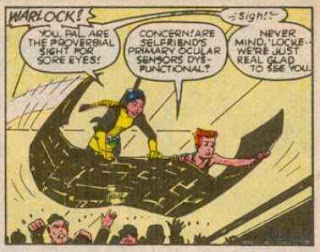 With Karma believing Illyana has willingly joined her, Illyana is ashamed to admit to herself that a small part of her does want to join her. 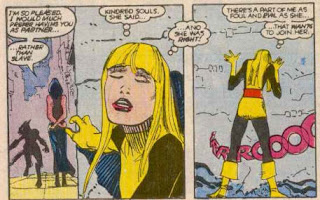 We get a glimpse at the effectiveness of a depowered Storm, as she essentially takes down the possessed New Mutants with little more than a bo staff. Storm is also able to ignore the effects of Dani's power.

ClaremontismsKarma lets out a "sacre bleu!" at one point, the French exclamation joining the ranks alongside "Boszhe Moi!" and "Unglaublich!" 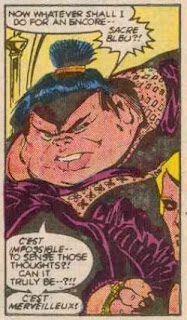 Now even other characters are reminding us that Sunspot is strong but not invulnerable. Illyana's Soulsword, and its resultant explanation, appear as well. 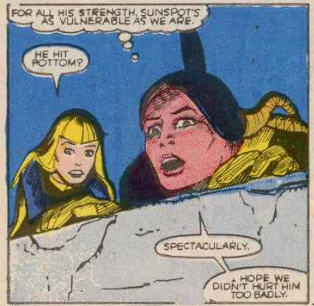 Teebore's Take
This issue continues "The Hunt for Karma", and the centerpiece of this middle chapter in that story is a inter-team fight between the New Mutants Karma has possessed and the New Mutants (and Storm) whom remain free. In theory, this isn't a bad way to spend an issue, particularly with the larger cast that hasn't had much of chance to interact as a group yet. In execution, however, it's a bit lacking, let down by the Leialoha art, which isn't quite as sharp as it was last issue and is, in places, downright Milgrom-esque (which is never a good thing). It's not a fair speculation to make, but its hard not to wonder how much better this issue would look if Sienkiewicz had been able to draw it. As it is, this is yet another perfectly inoffensive issue that never quite rises above the level of standard genre fare, a level that, unfortunately, seems to be the new standard for the title.

Next Issue
Next week, we look first at the Longshot miniseries, followed by Secret Wars II #5.
Newer Post Older Post Home
Posted by Austin Gorton at 11:00 AM