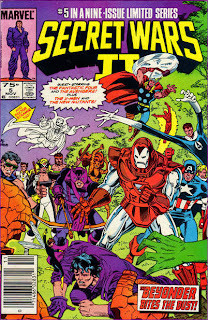 In a Nutshell
The first appearance of Boom-Boom.

Plot
After casually destroying a train, the Beyonder is confronted by one of the passengers, a young woman named Tabitha, whom everyone calls Boom-Boom. Since the Beyonder destroyed her train, she decides to tag along with him as she heads for a school in Westchester. Later, the Beyonder makes a campsite for them, and Boom-Boom tells him about her past and her mutant power, while the Beyonder tells her about his recently ended romantic relationship with Dazzler, and the emptiness he's been feeling since she rejected him. When they arrive at the school, which the Beyonder knows to be Xavier's school, he's attacked by the X-Men and the New Mutants. Bored, he drives away, leaving Boom-Boom behind, who angrily runs off into the woods. She threatens to kill herself, which convinces the Beyonder to rejoin her, and together, they fly off into space.

Declaring that Earth is too small for him, the Beyonder takes them to the Worldcomplex Headquarters of the Celestials, ancient alien beings who shepherd the development of the universe. After exploring the alien bazaar on the ship, the Beyonder picks a fight with the Celestials, threatening to destroy existence if they don't pay attention to him. Boom-Boom, realizing he really would have destroyed everything, is frightened, and the Beyonder sends her back to Earth. On Earth, Boom-Boom contacts the Avengers, and they arrange to ambush the Beyonder. When The Beyonder answers Boom-Boom's call, he's attacked by the combined Avengers, Fantastic Four, and Dr. Strange. However, saddened by Boom-Boom's betrayal, he simply walks away from the fight. The rest of the heroes realize they can't do anything but let him go. When they attempt to question Boom-Boom, they realize she too has slipped away, though they believe they haven't seen the last of either her or the Beyonder.

Firsts and Other Notables
This issue is the first appearance of Boom-Boom (Tabitha Smith, later Boomer and Meltdown), who will go on to become a supporting character in X-Factor, a member of the New Mutants and a founding member of X-Force, thus becoming something of a fixture in at least some corners of the X-universe from the latter half of the 80s through the 90s. She is a mutant with the ability to create explosive balls of energy she calls "time bombs", and will remain functionally a walking stereotype of the 80s until well into the 90s. 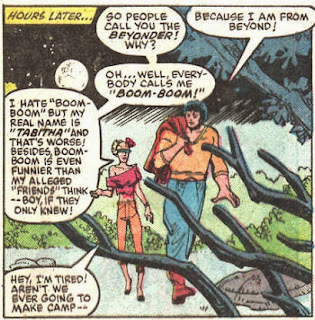 The colorist for this issue is credited as "M. Hands", which stands for "Many Hands", a credit often used (along with D. Hands, for Diverse Hands) by Marvel when multiple artists, usually whomever was free when it came time to do the work, worked on a specific facet of a book (one usually sees it more often as an inker credit).

The Chronology Corner
The X-Men's appearance in this issue occurs just prior to Uncanny X-Men #199. The New Mutants' (specifically Cannonball Sunspot and Warlock) appearance is harder to place. The Marvel Chronology Project lists it as occurring after New Mutants #34, but the end of that issue transitions fairly seamlessly into New Mutants Special Edition #1 without leaving much of a gap for the events of this issue to occur. Yet that issue has to occur after Uncanny X-Men #199, so there's really no good way to reconcile the New Mutants' appearance.

A Work in Progress
As the issue opens, Boom-Boom is on her way to a school in Westchester that she's heard takes in mutants. 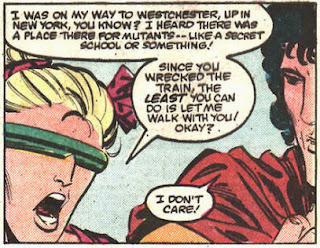 We learn Boom-Boom ran away from an abusive father, who intended to "beat the mutant" out of her.

Boom-Boom says she received that name from others, and prefers Time Bomb herself, but that name won't stick and isn't used outside of this issue.

After Rachel psychically goads the X-Men into attacking the Beyonder, Wolverine mentions that he's as worried about her increasing power as he is the Beyonder.

Boom-Boom calls the Avengers hotline (mentioned before by Cannonball in an issue of New Mutants). 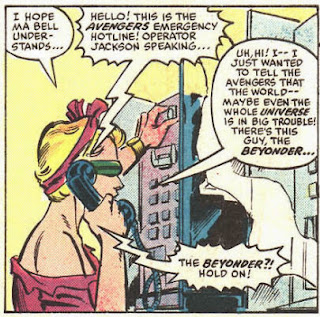 I Love the 80s
Since our last encounter with the Beyonder, he has assumed his more well-known and of-its-time look, while Boom-Boom looks like she just left the set of a Madonna video.

Young Love
Previous issues of Secret Wars II and her own title dealt with the Beyonder falling in love with Dazzler and ultimately being rejected by her. He spends most of this issue moping about it. 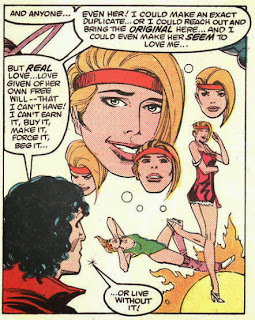 Teebore's Take
Like most of Secret Wars II, this issue is not terribly good, featuring more surface level musings on the nature of humanity featuring uncreative fight scenes depicted via simplistic art (handicapped either by the Beyonder's power or a lack of imagination, Milgrom can come up with no better way to show two different teams' confrontation with the character than by having everyone simply pile on the Beyonder). We are only discussing this issue, frankly, because I needed something to pair with the Longshot miniseries and in addition to fitting well with that chronologically, this issue is notable for introducing a minor but relatively significant character, one who ends ups appearing in three different X-books. And while I had remembered that this was the issue in which Boom-Boom first appeared, I'd forgotten just how involved she is in the proceedings.

Far from a brief appearance sparked by crossing paths with the Beyonder (a la Thundersword in issue #1), Boom-Boom is instead on almost every page of this issue, palling around with the Beyonder, journeying with him into outer space and reporting him to the Avengers. The amount of page time Boom-Boom receives here suggests Shooter was either fond of the character or felt she had potential, and sure enough, eventually another writer would come along and make Boom-Boom a regular fixture in a title. But while Louise Simonson will more or less stay true to the abusive backstory given here (a backstory which makes for an interesting contrast with the more Valley Girl-ish personality Boom-Boom displays, here and elsewhere), Boom-Boom's cosmic travels with the Beyonder will be largely downplayed, making her presence in this story feel like more of a footnote despite the high level of her involvement in it.

Next Issue
The Brotherhood of Evil Mutants take a surprising turn (while Rachel takes a less surprising one) in Uncanny X-Men #199, and "The Hunt for Karma" concludes in New Mutants #34.
Newer Post Older Post Home
Posted by Austin Gorton at 12:00 PM