Wrap-Up Weeks continue, as Revolution ends its first season and we finish our coverage of Parks and Recreation. Look for one final post before I take a break for the summer next week, finishing up Community and Glee. 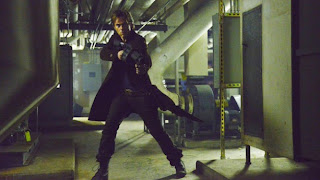 I'm not terribly surprised this show turned the power back on (though I will admit I was a little worried that the episode was going to end after Aaron clicked the enter key, leaving the reveal of whether the power turned on or everyone was killed by exploding nanobots for the second season premiere); there are plenty of stories to tell about a world where the power was off, and now is suddenly back on, just as there were many stories that could have been told about a world without power. After a relatively slow-building first half of the season, this show decided that breakneck plotting was the way to go, thus making it clear it wasn't all that interested in telling those smaller stories about a world without power. So yeah, let's move things forward. Characterization certainly isn't this show's strong suit, so at least it keeps the plot moving.

One season-long element that definitely had run its course was the notion of Monroe as the Big Bad. I'm perfectly fine with keeping him in around to deal with a world where's he's been usurped and (most likely) forced to ally with Miles and what's left of the rebels, as the whole "dictator grows increasingly unhinged and loses power the more he tries to acquire" storyline really had grown tiresome, at least as presented.

I guess Randall didn't die last episode. But he is dead now. I'm not sure his whole "I'm a patriot" spiel really fits what we've seen of the character, but at least we got some motivation for his actions this season (along with the reveal at the end that he was working for someone).

Speaking of that reveal, it wasn't quite the "holy shit" moment the show intended, but I am mildly intrigued.

Neville keeping Monroe alive (so that he can be rescued by Miles) smacked of Main Character Protection, as did that helicopter's seeming inability to hit a relatively slow moving target.

The episode title is another Stephen King allusion.

Oh yeah, Nora died. That's a thing that happened in this episode.

Oh, okay, one comment on Nora: her whole "Miles loves Rachel" bit seemed to come out of nowhere. I mean, not the sentiment itself, which is obvious at this point, but Nora's realization of it.

Sometimes I imagine a slightly different version of this show, one where the main character doesn't happen to be the child of parents who helped orchestrate the blackout and the niece of one of the architects of the predominate governments left in the country, one where the focus is more on life in the post-blackout world as the main character struggles with a more localized antagonist before getting drawn into the big picture of things. Then I think that if I was watching that show instead, I'd probably be complaining that things were moving too slow and I want more big picture, so maybe there's just no pleasing me... 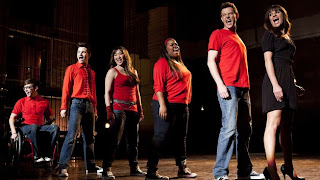 Not surprisingly, the best part of this episode are the parts that don't have anything to do with the events of "Shooting Star". All the PTSD stuff is eye-rollingly lame (okay, Evan Evans started out funny, but then got run into the ground quickly), and the ouster of Sue means we're stuck with Roz Washington again, who is pretty much just the worst of Sue without any of the good (ie Jane Lynch). At least there's some indication that Becky is buckling under pressure, which means ol' Sue may not be gone forever (and for all my problems with the character, I hope she's not: I want her written well, not written out).

Other Thoughts
Will suddenly acting like a jerk was a really obvious bit of forced conflict, but whatever.

Remember when Blaine was going to take down the Cheerios from inside? Yeah, neither did the writers.

As I've mentioned before, I'm not a huge fan of original songs on this show, so I'm not exactly thrilled at the prospect of Marley cracking open her notebook. That said, what are the odds they actually do any original songs at Regionals (I say because the set list at Regionals almost never connects to anything that has happened in previous episodes)?

Rachel singing "Don't Stop Believin'", then imagining her friends recreating the ending of the show's first episode, was a nice acknowledgement of the show's history, but I found myself more struck by seeing the 2013 versions of the characters recreating their original looks.

The Finn/Rachel conversation was another nice use of the characters' history. What was once a relationship I couldn't care less about on the show has now become one of my favorites.

Only in the World of Glee: Everything about Finn and Puck at college. That said, their shenanigans, unrealistic as they were, were easily my favorite parts of the episode.

Favorite Song: "Fight for Your Right (To Party)". We've seen "Don't Stop Believin'" before, all the original songs left me cold, and Finn and Puck were clearly having a blast with this song.

Puck: Technically I’m not enrolled. I’m just auditing a few classes.
Will: Do you even know what that means?
Puck: Gotta go. 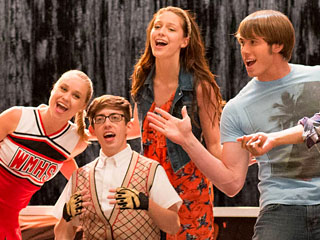 And we're back to PSA-Glee, with not one but two very special messages, one about not being so connected to technology all the time, the other about oh dear god they actually went there and did a molestation episode. The first was funny simply for the lack of irony with which it was presented (I mean, the episode was plastered with the usual "helpful" hashtag suggestions throughout and ended with the usual shoutout to the "Gleek of the Week" from Facebook/Twitter), while the second was another example of Glee's usual well-intentioned attempt to shed light on a serious issue even while it lacks the mechanisms to address it sufficiently/respectfully/intelligently.

Other Thoughts
This whole Ryder/catfishing thing is dragging out, though at least the show acknowledged the possibility that the culprit could be someone outside the glee club (though it's totally not) and had Ryder calling this person on being a no show. They also protected the possibility of it still being Kitty by having her appear to Ryder after the Catfisher had signed off.

The boys' reaction to Ryder's confession was odd. On the one hand, it's a genuine reaction (there was even a hilarious episode of South Park built around the notion), but it was never really made clear whether or not Ryder was genuinely accepting their reaction, or whether the show was condoning it or not. Just more proof of how the show isn't really capable of handling the issue.

SJP is back, and is actually referred to as a Fairy Godmother, which is such an on-the-nose acknowledgement of her character that it's downright ballsy.
Apparently the teens of  2013 have never heard of Stomp!, making it seem like a wonderful and magical thing to them when it's really not.

Only in the World of Glee: Would a localized blackout at a school last as long as it did for the reason it did, all while the kids continue to attend class in a powerless school.

Favorite Song: Even though Marley's louder-than-necessary interjections of "time" were distracting, I'll still give the nod to "The Longest Time", one of my favorite Billy Joel tunes.

Sue: 95 years I gave those girls, and what did it get me? 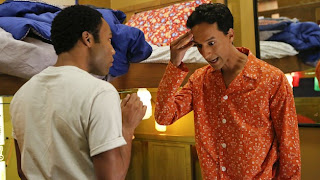 Like the puppet episode, this one felt very much like "classic" Community, taking an outlandish premise and using it as a springboard for character development. I am a little disappointed that the Troy/Britta relationship ended, simply because, after some wonderful build-up in the previous season, it never really amounted to much in this one, and now it's over. At the least the break-up itself was handled well, with some great performances from both Donald Glover and Gillian Jacobs.

Other Thoughts
Oscar winner Jim Rash wrote this episode, and the Dean had one of my favorite bits (his insistence that he and Jeff switched bodies too - Rash does a pretty spot-on Joel McHale impression).

The whole "one year anniversary of our first date" thing was a weird bit of timing. It was just Christmas last episode, which means we must have sped forward several months (as Troy and Britta's first date was last spring), yet the group is still doing work for Cornwallis' history class, which should have ended shortly before Christmas (hence the big deal made out of their grade in that class in "Into to Knots").

The janitors randomly having a murder mystery night cracked me the hell up. Also, the routine lighting check running gag.


Parks and Recreation: Are You Better Off? 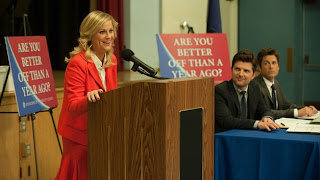 Not surprisingly, given that for perhaps the first time in its history, the creators of this show were fairly confidant going into this finale that they'd be back at least for some episodes in the next season, this episode featured perhaps the most season-ending cliffhangers of any finale. Leslie is being recalled, a mysterious someone tried to buy out Rent-a-Swag from Tom and is now opening a competing business, April is going to vet school, and Ron's having a baby (well, you know what I mean). It's an odd feeling for this show, but a welcome one, not the least of which because it means we're getting more next season.

Other Thoughts
I completely fell for the bait-and-switch in the pregnancy plot, fully believing that April was pregnant.

Always a pleasure to see Bert Macklin again, and Ann paired surprisingly well with him. It's a wonder the show struggles sometimes to find good Ann-centric stories, because she works really well with most other members of the cast in a supporting role.

April's concern over leaving town for vet school was a bit odd considering she and Andy started this season living apart while April was with Ben in DC, but I suppose that was a shorter, finite kind of thing.

As I'm sure you've heard by now, the show was indeed picked up for an additional season.Hooray!
Newer Post Older Post Home
Posted by Austin Gorton at 12:00 PM