Well, it took much longer than I expected but we've finally reached the top five. So, without further ado, my five favorite TV series (adhering to the rules found here) of all time:

5. Sports Night: I caught this show on reruns on Comedy Central. It was an odd fit for the network because, despite the abhorrent presence of an , ugh, laugh track in the first season and the fact that its episodes are only a half hour in length this show isn't really a sitcom. Sure there are comedic moments but no more than any other Aaron Sorkin television series. It's really a drama about the life and times of the cast and crew running a SportsCenter-esque show aptly labeled "Sports Night."
I’ve heard some criticize the show for not being a realistic take on how a sports show is produced but, in my opinion, that makes it no different than any other TV show depicting anything ever. Regardless of how closely it mimics actual TV production the fact is every episode enthralled me. The storylines were interesting and the acting was superb. Sports Night could seamlessly bounce from comedy to drama to social commentary. It's true that whatever social/political topic discussed on the show generally leaned towards my liberal bias (as most Sorkin written media does) but, at the same time, this is MY list of favorite television shows so leaning towards my biases can only help your ranking. 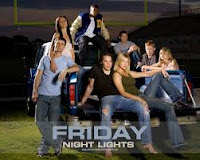 4. Friday Night Lights: Friday Night Lights is one third family/marital drama, one third high school drama and one third sports drama. None of which would have me reaching for the remote if I heard such a show was airing. With that said, seeing where I ranked this show is a testament to just how damned good this show was. Most of the acting is superb (and Taylor Kitsch and Minka Kelly do improve as the series goes on). The characters feel real and honest and so do the storylines. This was a show about people growing up and trying to live their lives and them dealing with the obstacles that life brings. Sure these characters deal with more hardships than most people do in real life but the show still feels real and (with a notable exception) never dips into sensationalism. What really sets this show apart is nearly all the characters are well developed and you care about all of them.
I once heard (I forget exactly where) that there's a mantra amongst TV producers/writers that "a happy marriage is a boring marriage." Friday Night Lights flies in the face of that idea. The marriage between the two main characters (Eric (the coach) and Tammy Taylor) is never in jeopardy the entire series. Yes, there are disagreements and arguments but the love in the marriage is never in doubt and the show never even hints at a divorce. Despite this their relationship and interactions still remain entertaining and intriguing. It's just fun to watch them and you end up rooting for both of them to succeed at whatever they're doing.
Alright, you can't talk about Friday Night Lights without bringing up the Season 2 "murder" plotline. People discuss it like a festering boil on an otherwise immaculate body. True, the plotline isn't very good but it's just not good by Friday Night Lights standards. It also doesn't fit the overall feel of the show. At the same time it's certainly not the worst thing that has been on TV and, frankly, if that's the worse plotline you have in the entirety of a series then you're doing very well for yourself.
The less discussed flaw of the series is the fact that a writers’ strike occurred near the end of Season 2 thus cutting that season short. Not only does that season end abruptly but when Season 3 comes along some plot threads from Season 2 didn't carry over and thus are unresolved.
However, in my opinion, both those issues are minor blemishes on a show that is nearly perfect. Sure, the premise of this show isn't my cup of tea but, no matter the subject matter, I can appreciate quality and that's what this show has in spades.

3. Buffy The Vampire Slayer: This show was awesome. Many people smarter and more eloquent than I have broken down just what makes this show so great so instead of going into too much detail I'll just quote a recent Big Bang Theory episode: "...instead of monsters chasing a pretty girl, this is a pretty girl chasing monsters."
This is a show about teenagers going through high school and college (kinda, sorta) dealing with typical teenaged drama along with vampires, demons, apocalypses, etc. Naturally, it's the latter that really appeals to me. Where this show really shined was using an episode's demon or monster as a metaphor for feelings and issues adolescents deal with. In one of the most literal examples, plenty of teenagers have had times in high school where they felt isolated or even invisible to their peers so one episode features a girl who, while having these feelings, literally becomes invisible.
It is tough ranking this show against Friday Night Lights. Buffy the Vampire Slayer is about a hot girl slaying demons. You can't get much more in my wheelhouse than that. But the fact is this show does have its valleys. Season 4 seemed aimless and Season 6 was bound and determined to get me to slit my wrists. But when this show was on its game it was some of the best television I've ever watched. (I suppose the same could be said about Lost but Lost’s valleys were bottomless pits…and the less said on that series right now the better.)
Contrast Buffy to Friday Night Lights: Friday Night Lights was a straight drama about high school in Texas and its football team. That certainly is not my preferred type of premise. However, the show had almost zero valleys. And even if some plotlines weren't great this series nailed every episode. Then again, it had the benefit of having fewer episodes.
So, what wins out? The action/adventure show whose premise is much more to my liking or the drama that's nearly flawless? Well, once again...hot chick fighting vampires, demons and even gods. How can I say no to that? 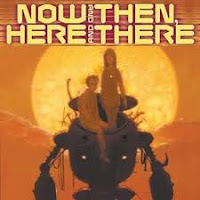 2. Now And Then, Here And There: It should come as no surprise that my top two all-time favorite series are anime. They generally appeal to what I like and they have the added advantage of a limited amount of episodes thus being easier to have no lulls or valleys of quality.
I didn't know anything about Now and Then, Here and There before watching it aside from its name...which told me little. The first episode was a bit of a feint as well. It featured an average day in the life of a young, simple, headstrong teenaged boy named Shu who powers through his day with seemingly no self-awareness. I wasn't sure if this was going to be a high school and/or family drama or a teen comedy. Then Shu gets teleported with a mystery young girl to a grim, post-apocalyptic future.
Shu and the mysterious girl end up being held hostage in a giant city/tank run by an insane king whose mission is to obtain as much as the world's most precious resource as possible: water. He goes after water by any means necessary.
This show is dark. It's about humans struggling through a desolate, waterless Earth. It has torture in many forms. It's about children being drafted into an army and about the horror and affects of them going into war. This show’s bleakness could have been too much for me if not for the main protagonist: Shu.
Shu is an optimistic, determined, uncompromising, good natured boy whose ethics is stark white in a world filled with dark gray and black. In many other series he'd be too saccharine and could end up being the most annoying and disliked character. In this series his determination and never-ending belief that things will turn out alright is refreshingly bright paint on an otherwise dark canvas. It ends up working beautifully. You can't help but root for Shu. You root for many other of the less optimistic characters but Shu gives these characters (and the series as a whole) a commodity even more rare and precious than water: hope. 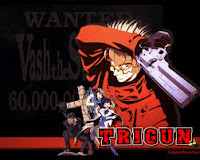 1. Trigun: And we reach the top. Is it surprising that my top two series are science fiction series with an environmental message and a pacifist protagonist? I suppose I have "a type."
Trigun took a few episodes to get rolling but once it did it took ahold of me and didn't let go. There's humor, action, interesting and diverse characters and also made me think. Every episode was quality.
This show isn't perfect but it's close. It's only 26 episodes long which limits the series from expanding upon certain pieces to this world and certain characters backstory. But, for me, this series does everything else so well that I can overlook my few nitpicks.
Trigun has given me some of the most compelling moments I've ever experienced while watching TV. In one particular episode I flip flopped approximately six times between being convinced a certain character was and then was not going to die. This character's ultimate fate, of course, I'll keep a secret. This series also gave me the most shocking and impactful moment I've ever experienced. It's not twist but...well...it's hard to discuss without spoiling it so I’ll just leave it at that.
Having a do-gooder protagonist who refuses to kill no matter what can be problematic. He could come off as bland and milquetoast. But Vash the Stampede has depth. The whole series is an exploration Vash's philosophy and the toll it takes to keep with it. They are questions that speak to me personally and that I still think about. To this day I still find myself pondering one of the main questions proposed by this series: Can you save the butterfly without killing the spider?


Up next time: Nothing. It's actually over!
Newer Post Older Post Home
Posted by Dr. Bitz at 1:05 PM