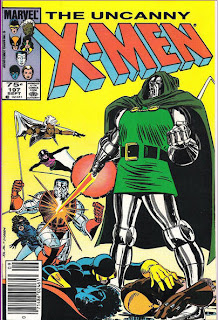 In a Nutshell
Kitty and Colossus fight Dr. Doom for the life of Arcade. Sort of.

Plot
Colossus awakens from a dream in which he's unable to stop the women he loves from transforming into monsters to find himself, along with Kitty, in a strange place. Suddenly, Arcade enters the room, welcoming the X-Men to Murderworld. Meanwhile, in Alaska, Cyclops, having been contacted by Moira and asked to return to the mansion, packs for his trip and says goodbye to Madelyne. In Murderworld, Arcade explains to Colossus and Kitty that Dr. Doom is trying to kill him as payback for their previous failed partnership, and that if they don't help him, his associate Miss Locke will go after their families. Though Kitty and Colossus are suspicious of Arcade, they agree to play along simply to find out what's really going on.

In Manhattan, Nimrod stops an attempted robbery at a diner, incinerating the criminals as the patrons laud him as a hero. In Murderworld, Colossus and Kitty, with the aid of Arcade's android X-Men replicas, battle Dr. Doom until Colossus inadvertently crashes Doom's plane into Arcade's control room. Colossus tosses Kitty into the room, then follows. When he arrives, he finds Doom, standing over a slain Kitty, about to kill Arcade. Just then, Kitty suddenly rises through the floor, disrupting Doom's armor and revealing Miss Locke inside. Kitty explains that she replaced herself with one of Arcade's robots in order to keep an eye on Arcade, while Arcade reveals that the entire attack was part of annual birthday tradition in which Miss Locke tries to kill him. Arcade returns the X-Men home, and Kitty and Colossus acknowledge their reestablished friendship. In Africa, Storm regains consciousness after being shot, fends off vultures, and defiantly declares that she's not dead yet.

Firsts and Other Notables
Arcade serves as the villain of this story, more or less completing his transition from "villain who earns a multi-part story" to "villain who pops up to serve as an antagonist in a one-off story that's really about something else but needs a villain to use as a backdrop". Though this also effectively neuters what little danger was left in his whole Murderworld schtick, I like this use of the character much more than having him headline a big story.

Cyclops pops up in a few pages, having received a call between issues from Moira about Xavier's weakened condition, asking him to return to the school, though Madelyne reminds him his place is ultimately with his family now. It's been said that Claremont was made aware of the imminent return of Jean Grey for the launch of X-Factor around the time he was working on issue #198. Presumably, the Cyclops scenes in this issue could have been written with that knowledge in mind, making them an effort on Claremont's part to setup Cyclops' actions in X-Factor (thus passing off a ball that will be quickly and immediately dropped in that series). 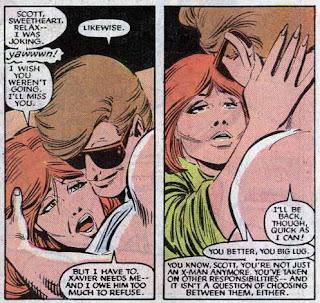 The Chronology Corner
Though no overt mention of it is made here, as this story takes place following the events of the X-Men/Alpha Flight limited series, in which we learned Madelyne is pregnant, her appearance here marks the first time she's appeared pregnant in X-Men.

A Work in Progress
Kitty, who was sick with the flu during the X-Men's last encounter with Arcade, meets the villain for the first time in this issue.

Nimrod, still living and working with Jamie Rodriguez, has perfected the look of his human disguise. After incinerating a pair of muggers, he's once again hailed as a hero by the diners he's rescued.

Arcade has a cadre of X-Men robots at his disposal, including a few curiously-dressed ones he refers to as his "Barbie dolls". 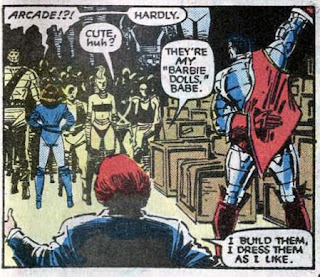 Kitty gets tossed as part of a Fastball Special. 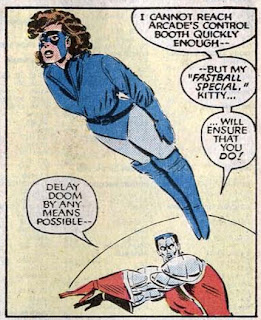 I Love the 80s
Battling a giant Doombot, Kitty wonders where the Ewoks are. 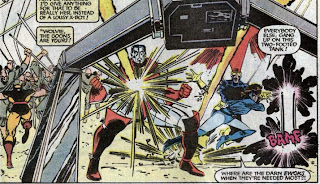 Though we don't see it happen, its implied that Arcade kidnaps Colossus and Kitty directly from the mansion just before the issue begins. We do, however, see that, after his contest with Miss Locke concludes, he drops them off in his sports car. 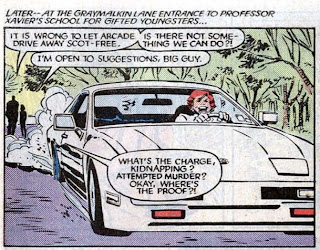 Young Love
Colossus begins to doubt that continuing to carry a touch for the deceased Zjasi is the best way to honor her memory. 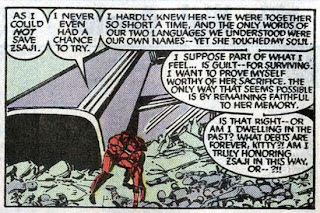 When Kitty reveals that she replaced herself with one of Arcade's robot duplicates, but didn't tell Colossus, he asks if she enjoyed making a fool of him. She admits a little part of her did. 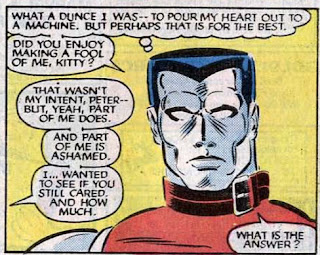 Having come to terms with their breakup, the issue ends with Colossus and Kitty walking off into the sunset together, declaring "the start of a beautiful friendship". 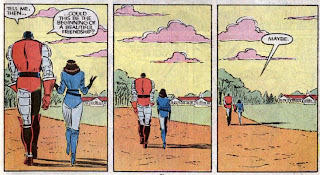 For Sale
Former LA Dodger and San Diego Padre Steve Garvey, who who won the National League MVP award in 1974, appears in a Nestle Quik ad. 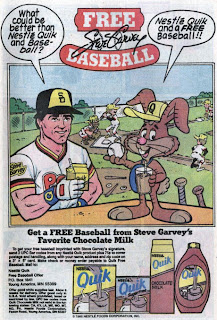 Teebore's Take
Unlike the previous issue, this one has never been a favorite of mine. It's a perfectly cromulent issue, fitting as it does the general style of the time (a self-contained action story that furthers character development with a few pages advancing subplots/setting up future stories) and it meets the objective it sets for itself (as it's clearly designed to address the Kitty/Colossus relationship and move those characters past the lingering issues of their breakup and into a place where they can once again be friends). It's just that I don't care all that much about the Kitty and Colossus relationship, at least at this point. Toss in Arcade, a villain who works fine in a one-off story like this (in fact, he works best in this kind of story) but, similarly, doesn't do much for me personally, and there isn't much about which to get excited (the one part of the issue I enjoy the most is, not surprisingly, the brief sequence in which Cyclops grapples with his new role as a family man). This isn't a bad issue, to be clear, just one which, through its choice of subject matter and antagonist-du-jour, doesn't do much for me.