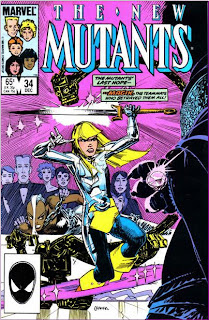 In a Nutshell
The New Mutants defeat Karma.

Plot
In Limbo, Warlock attacks Illyana, believing that she's joined Karma. Illyana defends herself as she tries to explain to Warlock that she has a plan to save their teammates, but is ultimately forced to lower her defenses, telling Warlock that if he truly believes she's evil, he can kill her. Warlock is unable to do so, and finally accepts that Illyana isn't a traitor. Illyana calls up a scrying pool and looks in on Karma's nightclub. She and Warlock watch as Karma torments Storm. Inspired by some cryptic remarks Karma makes about her past with Xavier, Illyana and Warlock teleport twenty years into the past, where they observe Professor Xavier's encounter with the evil and powerful telepath Amahl Farouk. Illyana deduces that Farouk may have survived that encounter, and has now taken control of Karma, which accounts for her evil actions and increased telepathic abilities. After hatching a plan, Illyana seemingly returns to Farouk and takes him up on his offer of partnership.

However, Farouk has no interest in an equal partnership, and turns his full attention on bending the young girl to her will. As he does, the New Mutants, unnoticed, are telelported away, and "Illyana" reveals herself to be Warlock in disguise. The real Illyana returns Storm and the New Mutants, now free of Farouk's control, back to the nightclub, where they furiously attack, determined to keep Farouk off balance and unable to re-possess them. When Dani uses her power on Karma, she realizes that Farouk has fled Karma for another host. Illyana stabs Doug with her Soulsword, and when he reacts to the attack, they realize Farouk has possessed him, as the real Doug knows Illyana's sword wouldn't hurt him. Karma, unwilling for anyone else to suffer at Farouk's hands, challenges him to a psychic duel. Overcoming her doubts, she's able to force him back onto the astral plane and emerges from the duel victorious. Storm, believing the New Mutants have earned a rest, offers to take them on a vacation.

Firsts and Other Notables
It's revealed that Karma has been possessed, since shortly after issue #6, by Amahl Farouk, the Shadow King (though that name is never used here), whom Professor Xavier fought in the flashback of Uncanny X-Men #117 (revisited in this issue), and is thus responsible for all the criminal acts Karma committed (as well as her obese state). Though Karma is freed of his influence and chases him away, he remains at large, existing on the astral plane, at story's end. 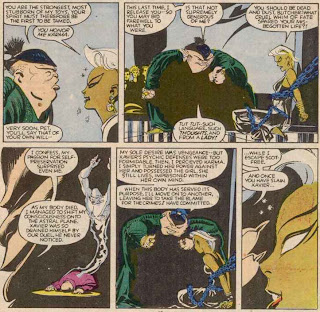 The Chronology Corner
As mentioned in issue #32, this entire story takes place after Uncanny X-Men #198.

A Work in Progress
Karma mentions that Storm's psychic defenses are almost as strong as Xavier's.

After observing Xavier's previous encounter with Farouk, Illyana reasons that the villain may have taken possession of Karma, using several of the hints planted throughout this story to reach that conclusion. 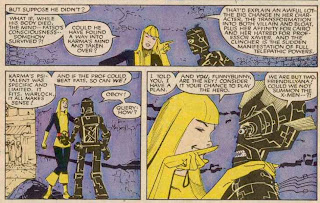 The reasoning for why Farouk would leap from Karma to Doug is sound, but nevertheless probably doesn't make Doug feel too good about himself.

I Love the 80s
Illyana compares Warlock's attempt at a disguise to E.T.'s. 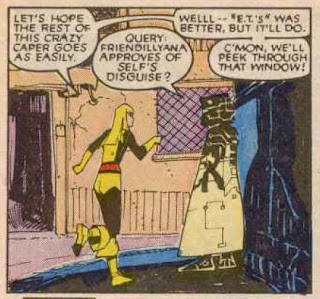 Claremontisms
Illyana uses her Soulsword a few times in this issue, and where her Soulsword is, the phrase "ultimate expression of her magical power" is never far behind. 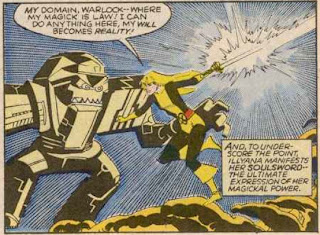 They're Students, Not Superheroes
Despite all of their teammates being in the thrall of Karma, Illyana tells Warlock she's reluctant to teleport to the X-Men for help out of free that she'll makes things worse. 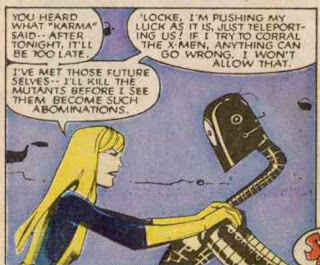 Teebore's Take
"The Hunt for Karma" ends as perfunctorily as possible, not bothering to deviate in any way from the previous two issues' genre-standard efforts, though the reveal that Karma has been possessed by Xavier's old enemy Farouk does make for an interesting twist that pays off several of the hints seeded throughout this story and the previous one and helps connect the New Mutants to the larger history of the X-universe. Also, to Claremont's credit, while the New Mutants' efforts to defeat Farouk are fairly routine (they basically overwhelm him until he abandons Karma, a strategy that works this time when it hasn't before because it does), Karma is at least the primary agent in her ultimate rescue, facing down the villain one-on-one and defeating him through the sheer force of her will, making her, in the end, as much as a rescuer as the one needing rescue.

At three issues long, it's tempting to call this story overly long, but it's really not. The beats it hits are, again, fairly standard, and while nothing here is terribly exciting, little of it feels unnecessary or tacked on either (well, okay, the Ancient Egyptian Magical Storm Ancestor bit in issue #34 was pretty superfluous, but that was all of two pages). This isn't a bad story, but wedged as it is between the end of Sienkiewicz's run and the relatively big shakeup in the status quo of the book set to occur in the next issue, it feels more than anything like a fill-in story, an exercise in treading water, even though it ultimately features the return of one of the book's original cast members.

Next Issue
The New Mutants' vacation is interrupted by a trip to Asgard in New Mutants Special Edition #1, and the X-Men follow them there in X-Men Annual #9.
Newer Post Older Post Home
Posted by Austin Gorton at 1:00 PM