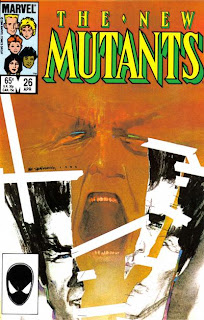 In a Nutshell
The first appearance of Professor Xavier's son, Legion.

Plot
On Muir Island, Tom Corsi marvels at the strength of his new body as Sharon Friedlander looks on. Suddenly, they see the astral projection of a young Arabian man. He screams, then vanishes, just as an alarm sounds. They rush to David Haller's room and discover him crying for help in the midst of a telekinetic storm. As Tom and Sharon duck for cover, David's hands burst into flames and he starts to laugh with the voice of a girl. Then the room explodes. The next morning, Professor X and several of the New Mutants arrive on Muir Island, responding to a call from Moira for help. She shows Xavier Tom and Sharon, whose bodies are unharmed but whose minds are seemingly gone. A surprised Xavier is then reunited with Gaby Haller, his former lover, and the mother of David. Meanwhile, at the Massachusetts Academy, the White Queen admonishes Empath for his recent actions, and after he attempts to take control of her with his power, she telepathically blocks his access to it as punishment. Back in Scotland, the New Mutants explore the town of Ullapool as Xavier attempts to telepathically help David.

Xavier notes that David's condition is very similar to that of his mother's when Xavier first treated her. But when he attempts to break down the boy's psychic walls, he sees an image of the telepathic Arab before being forcibly pushed out of David's mind. Xavier tells Moira and Gabrielle that a portion of the boy's mind isn't his own. In the Bermuda Triangle, Lee Forrester awakens to a screaming Magneto, who is experiencing a nightmare. He unknowingly tosses his bed out a window, but Lee manages to wake him up in time to prevent him from falling onto the rocks below. In gratitude, Magneto kisses Lee. On Muir Isle, Xavier discusses David's condition with Gaby, and asks that she tell him about the trauma that made him autistic. As she does so, Rahne sneaks out of bed to visit Moira in her lab, but they are interrupted by another astral projection of the Arab, who tries to warn them about something just as Moira's lab explodes.

Firsts and Other Notables
This is the first full appearance of David Haller, aka Legion, following a mention in issue #1 and an appearance in a pinup last issue. He is the son of Gabrielle Haller, Xavier's former patient/girlfriend first introduced in X-Men #161 (though Xavier hasn't yet learned that Legion is his son). This story will reveal that Legion suffers from a form of multiple personality disorder, triggered when he first manifested his mutant power, with each personality capable of using a different mutant power. In this issue, we see him use telekinesis, telepathy, and pyrokinesis (the ability to mentally create fire), each of which, we'll learn, is the specific power of one of his three dominate personalities. 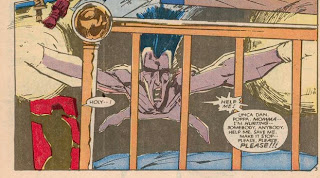 Though not as significant a character to the X-Men narrative as you'd expect the son of Professor X to be, Legion nonetheless will go on to have a critical role in several significant stories, and is currently headlining the X-Men: Legacy spinoff.

Both Doug Ramsey and Warlock are amongst the New Mutants who accompany Xavier to Muir Island, making this their first appearance with the team since New Mutants Annual #1.

Tom Corsi and Sharon Friedlander return, following their transformation at the end of the "Demon Bear Saga" in issue #20, having been living on Muir Island ever since. We learn that their new Native American bodies are in peak physical condition, giving them near-superhuman abilities.

Curiously, this issue (and the next two) are set after Uncanny X-Men #193, which won't go on sale until two months after this issue. As a result, Banshee is shown returning to Muir Island with the New Mutants following the events of that issue. 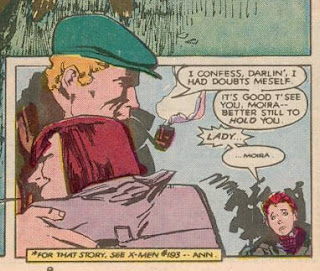 Later, Professor X mentions his weakened condition, a result of events which will occur in Uncanny X-Men #192.

Also, the White Queen admonishes Empath for his role in X-Men #193, and references events from the Firestar limited series (the first issue of which won't go on sale until roughly a year after this one). She then temporarily blocks his ability to use his power as punishment.

The regular price of the comic goes up with this issue, from sixty cents to sixty-five cents.

The Chronology Corner
As mentioned above, this story takes place after Uncanny X-Men #193.

A Work in Progress
We haven't seen it in awhile, but the Professor X and the New Mutants fly to Muir Island via the Blackbird (Warlock proceeds to try and communicate with it). 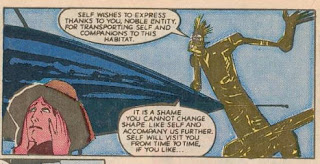 Warlock attempts to appear as a normal human, but seems to have more difficult with it than he did in New Mutants Annual #1 and Uncanny X-Men #190. 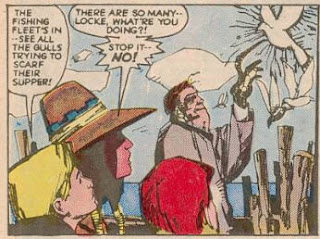 It's established that Warlock can touch/be touched by others without infecting them with the transmode virus (called the transmutation virus here).

The specific details of Magneto's dream are left unclear, but it presumably pertains to his time in the Holocaust.

I Love the 80s
Sharon helpfully defines telekinesis for Tom. 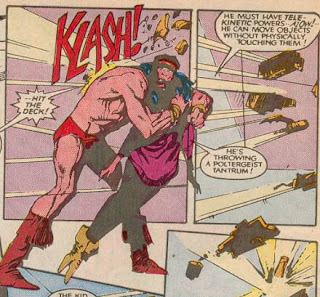 Claremontisms
Warlock is referred to as "Locke" and Dani as "Chief" throughout.

Artistic Achievements
Sienkiewicz will really go nuts in the next two issues, but he does turn in a few great sequences in this issue, including a neat depiction of Legion forcing Xavier out of his mind and back into the physical world, in which a giant image of Legion forms the central gutter between panels, resulting in Xavier being depicted as getting thrown out of a representation of Legion's mind and emerging from his head at the same time. 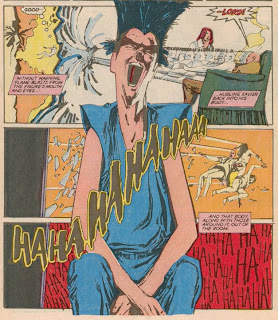 "Professor Xavier is NOT a Jerk!"
Despite being curious about what Gabby is hiding from him regarding David, Xavier specifically says he won't use his telepathy to probe her mind and find out. 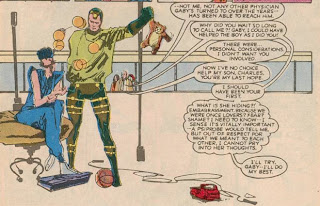 Later, he apologies to her for taking advantage of her when she was his patient.

Young Love
After once again saving Magneto's life, Lee and Magneto kiss, then presumably do more, marking this issue as the beginning of their romantic relationship.

Teebore's Take
This issue kicks off the three part "Legion" story that finally sees Claremont getting around to paying off the thread he started way back in issue #1, when it was revealed that Professor X unknowingly had a son. It also marks a return to form for both Claremont and Sienkiewicz following the relatively lackluster and drawn out Cloak and Dagger story from the previous four issues. "Legion" is arguably Sienkiewicz's swan song on the title (after finishing this story, he'll stick around for one more four issue story), featuring some of his most striking and inventive work on a story with a setting that plays to his strengths. A few pages herein aside, though, most of that comes in the next two issues, along with more information about Xavier's son.

This issue, meanwhile, consists mainly of setup as Claremont once again uses the beginning of a new story arc to do some character work. As with the previous story, he's once again working with a pared down cast. With Sam and Illyana featured in the last four issues and Amara getting page time in Uncanny X-Men, he gets around to doing something with Doug Ramsey and Warlock, fives issues after they ostensibly joined the cast (Rahne is included despite her significant role in the previous story most likely because of the setting, while Dani is probably included because she has psionic powers and is, as has been mentioned before, Claremont's favorite). Doug is shown to have a lot of enthusiasm for the new life he's been thrust into, while Warlock is continuing his "fish out of water/'selfriend'" schtick that is already becoming somewhat tiresome (especially given his portrayal in contemporaneous issues of X-Men). This "cast within a cast" approach is relatively unique (though not entirely without precedent, as Claremont has clearly reached a point in X-Men where he no longer feels compelled to feature the entire cast every issue), but it works to the book's advantage, not only giving Sienkiewicz room to play, but giving the characters room to stretch and grow as well.

Next Issue
Warlock's dad arrives on Earth in Uncanny X-Men #192, while the mystery of Legion deepens in New Mutants #27.
Newer Post Older Post Home
Posted by Austin Gorton at 11:00 AM