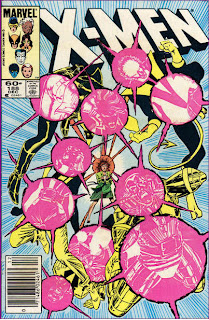 In a Nutshell
The Wraiths are defeated and Nightcrawler questions the purpose of the X-Men.

Plot
In Eagle Plaza, the X-Men and Forge are attacked by a mass of mystical Shadowbeings called forth by the Dire Wraiths. In Forge's sanctum, the Wraith who has taken Naze's form attempts to contact the Great Spirit, offering Earth in exchange for its help, but another entity reaches out, destroying the Wraith and claiming Naze's form. Nightcrawler teleports into the building along with Amanda Sefton, followed shortly by Illyana, who are able to disrupt the Shadowbeings enough to free the X-Men. However, they aren't able to seal the rift in reality through which the Shadowbeings are coming to Earth. Storm suspects the Wraith she stranded on the roof is still alive and countering Amanda's magic. Nightcrawler teleports Forge to the roof, and he slays the Wraith, ending the threat. Storm tells Forge the X-Men are leaving and not to try and find them. She says she and Forge will meet again, though he may well wish they had not. 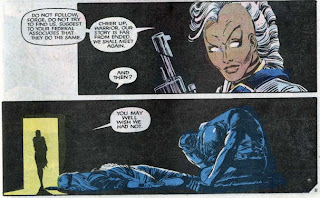 Meanwhile, in the Bermuda Triangle, Lee Forrester's fishing boat comes across a man in the water. Rescuing him, she discovers he's Magneto. Back in New York, Nightcrawler calls a special meeting of the X-Men. In the wake of Storm's depowerment and escalating anti-mutant sentiment in the government, he questions what purpose the X-Men serve, and whether they'd all be better off living their lives for themselves. When he mentions the death of Jean Grey, an eavesdropping Rachel flies into a rage, briefly attacking everyone before calming down. She explains that in her timeline, Jean is her mother, and tells the X-Men about the harsh realities of her future, in which mutants have been hunted to near extinction. She insists that though they may be doomed, it's important that the X-Men continue to make a stand and keep Xavier's dream alive. Accepting he has a responsibility to do so, Nightcrawler agrees to stay. Meanwhile, at a New York fish market, a worker named Jamie Rodriguez discovers an ornate necklace inside a fish, one which speaks to him with offers of power.

Firsts and Other Notables
It's made explicit that Rachel is the daughter of Jean Grey in this issue, and we also learn a little bit more about the events between the end of "Days of Future Past" and her arrival in the present day (events which will be elaborated upon in issue #192).

Though unnamed, the Adversary technically makes his first appearance in this issue, as a disembodied burst of energy. 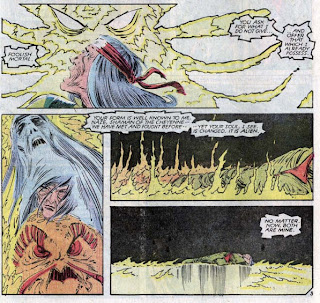 The Adversary notes that an alien has taken Naze's form, confirming last issue's hint that a Dire Wraith killed and replaced Naze's form (though of course it's eventually revealed that Naze is alive and well after all). Forge comes across Naze's injured form, believing it to be his mentor, but from this point forward, Naze is considered to be the Adversary using his form.

Colossus learns about his sister's magical abilities in this issue.

In one of those "only in comics" coincidences, Magneto, after being blown out of Asteroid M by Warlock in New Mutants #21, ends up in the Atlantic ocean, and is fished out by none other than Lee Forester, marking her return to the series. Their story will continue in New Mutants before returning to this book. 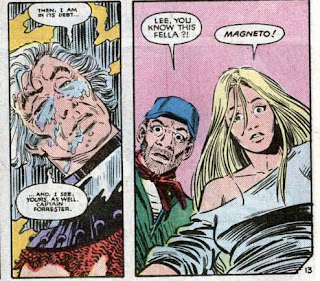 Nightcrawler's relative ennui regarding the superhero lifestyle and the purpose of the X-Men's fight will be touched on again in about a year, and then again many years later.

Jamie Rodriguez, a minor character who will play a role in the upcoming Kulan Gath and Nimrod storylines, appears for the first time. He discovers a necklace which will kick off the Kulan Gath two-parter in issue #190. 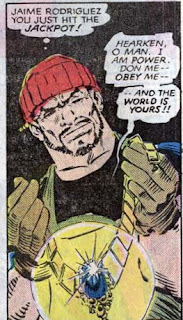 Not sure exactly how to categorize this, but Forge has Storm blast off his cybernetic leg to free him from the Shadowbeings, at which point he goes for help, depicted in a panel as doing so in a way that is obviously (and hilariously) hoping on one leg.

The Chronology Corner
Illyana and Roberto (who is eavesdropping on the X-Men's discussion along with Illyana and Rachel) appear in this issue following New Mutants Annual #1 and before New Mutants #22.

The events of the Kitty Pryde and Wolverine limited series are referenced for the first time, and Xavier's call to Wolverine in issue #4 of that series is considered to occur off panel during this issue.

A Work in Progress
Amanda debuts a new costume.

Like Storm last issue, Colossus uses the Brood as the benchmark against which to compare evil aliens.

Illyana says that her sorcery doesn't work well on Earth, leaving her Soulsword as her best weapon against the Shadowbeings.

Also, her armor pops up again, carrying over a lingering plot from New Mutants, and Illyana wonders what will happen when it's complete. 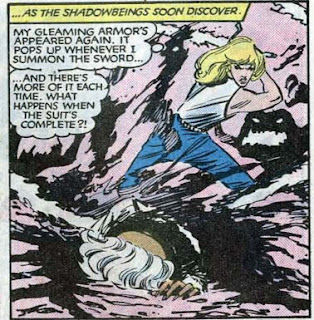 Given his aversion to using magic, Forge wonder to himself why he even built a mystical sanctuary into his home. 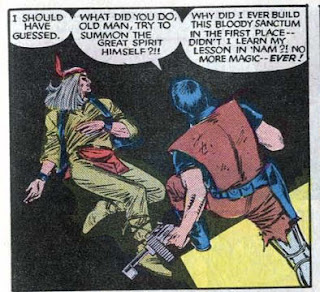 Nightcrawler is taken aback at Forge's willingness to kill a Wraith.

Back at the mansion, Storm affirms that she is no longer a mutant following some tests run by Xavier, and wonders if she still belongs with the X-Men. 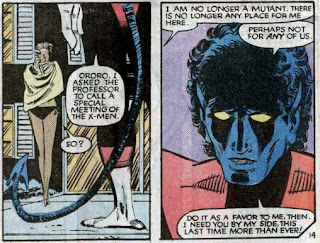 While arguing that the X-Men are essentially useless and should leave superheroing to groups like the Avengers and Fantastic Four who are accepted by the public, he does concede there is still a place for Xavier's school in the training of young mutants in the use of their powers. 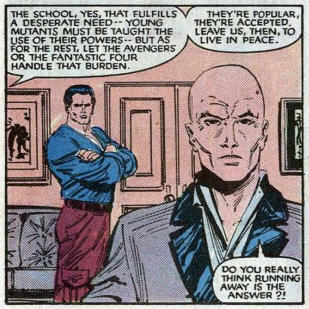 Following Rachel's description of her future, there's a neat bit where each of the X-Men (except for Storm) react to it. 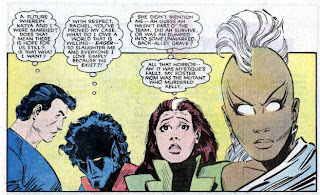 I Love the 80s
In a bit I've always loved, this issue reveals that the unseasonable blizzard hitting Dallas in this issue and the last is caused by the opening of the Casket of Ancient Winters in Thor. I have no idea how widespread that event was in other titles, but I've always looked upon it as a great example of the Marvel Universe done right: when something happens in one title that would logically affect the events in other titles, it gets referenced, not necessarily as the centerpiece of a three part crossover miniseries, but just an offhand reference in the context of all these books being part of a shared universe.

The first class cabin in the 80s apparently included an area to sit around a table.

Nightcrawler notes that despite all that humanity has accomplished in 20th century, when Xavier first found him, he was being hunted by a mob for being a demon. 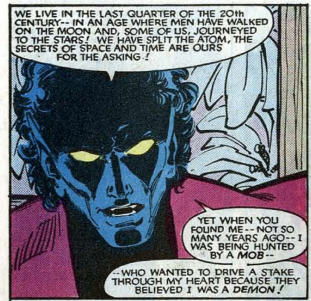 Nightcrawler apparently likes to quote Spider-Man's famous "with great power comes great responsibility" line, though at this point I believe that's a bit of metatextual work by Claremont and not a suggestion that Nightcrawler picked it up from Spider-Man himself. 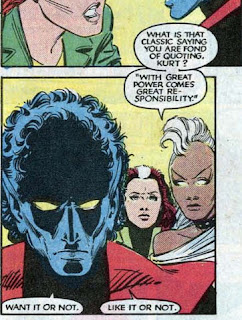 Artistic Achievements
The art team really knock it out of the park with this issue, from the cover, to the raw energy in the fight scenes (notably Illyana getting hurled across the room by the Shadowbeings), to the way Romita draws the energy effect around Amanda (I've always loved the energy halos he draws around hands), to the coloring in the panel as the X-Men's meeting begins, with everyone illuminated by firelight, and the way Nightcrawler's argument is framed in a very traditional six panel grid before Rachel bursts in and disrupts the proceedings (and the layout).

Young Love
In Rachel's future, Nightcrawler and Amanda are married.

Rachel Summers, Crybaby
Upon hearing the news that Jean Grey is dead, Rachel promptly freaks out. 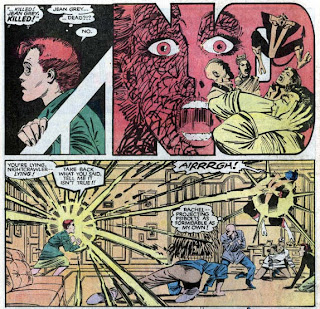 Human/Mutant Relations
Nightcrawler notes that Senator Kelly's Mutant Affairs Control Act, while once largely scoffed at, is on the verge of becoming law. 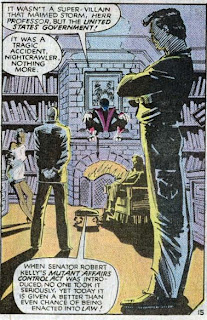 In order to show the X-Men that as bad as they thinks things are, it could be worse, Rachel tells them about her future, in which mutants are hunted down, imprisoned and exterminated by the government, and insists that the X-Men are important not because they're superheroes, but because they are mutant superheroes who serve as an example to other mutants and help keep Xavier's dream alive. 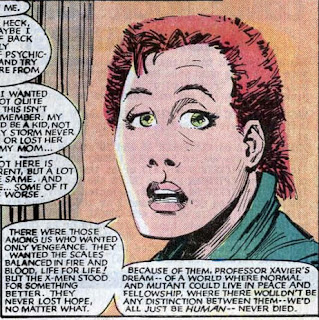 For Sale
Time for a new lineup of Saturday morning cartoons. 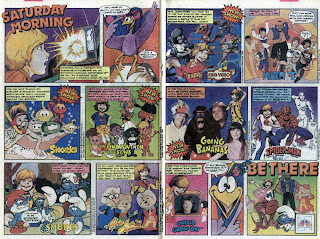 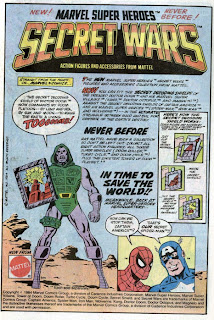 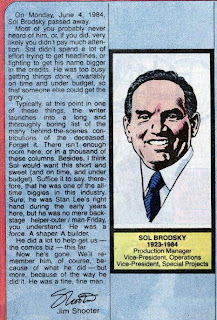 It's in the Mail
Nightcrawler answers the letters in this issue, pertaining to issue #177. He mentions the upcoming Nightcrawler limited series by Dave Cockrum, and explains that "Jimaine" is Amanda's "soul name", making it pretty obvious that Claremont is the one writing these responses.

Teebore's Take
This issue is packed full of stuff, and it's one of my favorites from this era for that reason. The front half concludes an ongoing story influenced by another series, Rom, set against a backdrop triggered by events in yet another title, Thor. Then there's a brief interlude following up on a plotline from a third book, New Mutants. The back half then questions the very existence of the X-Men, functioning not quite as the culmination but certainly a benchmark in Claremont's ongoing "Days of Future Past" references and allusions (and revealing, in part, the events which led Rachel to the past, answering that lingering question), and concludes with an epilogue that is setting up a future story (that will be told two issues hence).

A case can be made for that kind of density and casual references being a turnoff, but reading this issue for the first time as kid, I was blown away at the level of interconnectedness on display. This wasn't just one more chapter in the ongoing X-Men narrative, it was another chapter in a narrative tapestry formed by dozens of other worlds, a whole, at the risk of being twee, universe of characters that existed as part of the same overall story. When a snowstorm that covered the country was unleashed in one book, that snowstorm would be referenced in other books. When a character is blasted out of the sky in one book, he'll be rescued in another. It was unlike anything else I'd encountered before, and this issue (and others like it, from this era and others) became the foundation for my love of the shared universe, a narrative device that really only exists within superhero comics. And while, through the years, Marvel (and others) hasn't always lived up to the possibilities I saw in this issue, it stands as a great example of the Marvel Universe done right (which isn't to say it isn't also a cracking good issue of X-Men).

Next Issue
Tomorrow, Rahne and Roberto's connection to Cloak and Dagger comes to light in New Mutants #23, and next week we look at Marvel Team-Up #150, the final issue of the series, guest starring the X-Men
Newer Post Older Post Home
Posted by Austin Gorton at 12:00 PM