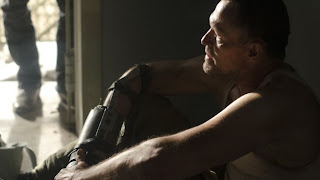 When Merle has become the voice of reason, you know you have problems.

Granted, Rick wisely came to his senses and realized handing Michonne over to the Governor was the wrong move about fifteen minutes into the episode, but that it took that long, that it was even an issue at all, felt wrong. Not because it made Rick look heartless (though it did), but because it made him look stupid. I could buy that the Rick of this season would sacrifice Michonne to save everyone else, even if I wouldn't like it, but to believe that the Governor would keep his word is just idiotic. Sacrificing someone in exchange for certain safety is at least worth a debate; sacrificing someone for, as Merle said, the chance of safety, particularly when you know that chance is small because the person you're bargaining with is batshit insane, is just idiotic.

In the end, Rick did come to his senses regarding Michonne, and even went as far as officially dissolving the Ricktatorship. Though there's one episode left in the season, that one is clearly being left to serve as the big action finale/status quo destroyer. This then felt like thematic culmination of the season, the result of Rick meeting his dark reflection in the Governor and realizing he can't lead his people in the same way.

The rest of the episode largely dealt with the elephant in the room that is Merle, showing elements of the group reacting to his presence in a way that, frankly, we should have seen several episodes ago. This led to a surprisingly effective sequence in which Merle, after kidnapping Michonne himself, decides he's going to make his own move on the Governor. It remains unclear how much of Merle's subsequent attack on the Governor was an act of independence (he was going to prove once and for all that he is his own man) and how much was born of a genuine desire to take out the Governor on behalf of the people at the prison (an ambiguity that doesn't bother me), but in the end, Merle goes out in an aborted blaze of glory, left for the (un)dead by the Governor and ultimately killed by his anguished brother. I wouldn't say it was an entirely redemptive act (what he did to Glen and Maggie was pretty awful), but it was narratively satisfying.

Other Thoughts
Glen proposing to Maggie was a nice moment of normalcy and hope in an otherwise grim reality. I appreciated that the actual proposal was relatively low key, but I hope Glen washed that ring before he gave it to her (just in terms of, you know, general cleanliness).

Hershel: You have my blessing. I mean, you're alive and not an asshole; standards are pretty low these days.

Once again, I wanted to call shenangians on Glen taking that ring and then not, you know, killing that zombie, and all the other ones lined up for the killing against the fence, but I suppose they could be keeping all the walkers in the yard as an additional defense against the Governor.

This was another episode with a tighter focus, and was all the better for it. We didn't see the Governor arrive at the meeting place, we didn't hear him reiterate that he had no intention of honoring his deal, we didn't see him torturing Andrea, etc.

This episode was written by next season's showrunner, Scott Gimple, who also wrote the spectacular "Clear".

Note to the writers: this episode is a good example of making a character if not sympathetic then at least more well rounded before killing him off, as opposed to the obvious "here's one line of interesting dialogue that says something about me as a character because I'm going to die soon" method used for T-Dog and Axel.

Why in the world would Michonne, out of anyone, go anywhere alone with Merle? Also, why wouldn't Merle have reacted faster to the likelihood of the car alarm attracting zombies? Or were we just supposed to get that he didn't care, and was focused on disabling the alarm?

Similarly, I get that the Governor was in full-on rage mode and Merle had just taken a beating, but I feel like a guy with a knife for a hand could do better in a fist fight.

How did Merle know where the meeting place was? Did Rick really go into that much detail with him?

Once again, I'm wondering just how far the prison is from Woodbury. Last episode seemed to suggest that Andrea could get there on foot in about a day, and Michonne made it back there by the end of this episode. Just how long were Michonne and Merle in that car before Michonne got out? Unless I'm grossly underestimating how far someone could walk in a day, it seems like if they were in it for more than 15 minutes or so they'd have long left the prison behind.

Michonne beheading that zombie with her tether was pretty badass. And gross.

It's really a shame that Merle insisted on playing the bad guy then died, because he displayed a really good head for tactics that could have come in handy for Rick.

Michael Rooker's presence will be missed. Merle was usually written somewhere between "inconsistent" and "horribly", but Rooker gave the performance his all, and turned him into a memorable character.

We all knew it wasn't going to happen, but how unexpectedly awesome would it have been if Merle actually had killed the Governor?

Similarly, the scenes of next week's episode seem to suggest that Rick and company might be pulling out of the prison instead of staying to fight. While it wouldn't be as satisfying, given all the build up, I think it would be absolutely hilarious if the Governor comes barging into the prison, guns blazing, blowing shit up, only to find that everyone is long gone.

The Governor killing Merle but leaving him to become a walker was a colossal dick move (also, biting off some fingers. Yeesh). Though it wasn't exactly as shocking, Daryl coming across Zombie Merle was as horrifying as Sophia emerging from the barn in season two, and wonderfully played by Norman Reedus.
Newer Post Older Post Home
Posted by Austin Gorton at 10:30 AM