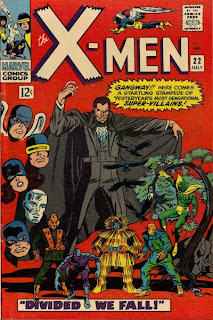 Plot: In the Danger Room, the X-Men face off against Colosso, a training robot created by Professor X in the wake of their recent battles against the Sentinels and Lucifer's robots. Working as a team, the X-Men defeat Colosso in the allotted time. As a reward, and in light of the fact that their last vacation was cut short by their encounter with Mimic, Professor X grants the team a two week break. The excited teens quickly leave for New York City, where Beast and Iceman meet up with Zelda and Vera while Marvel Girl has dinner with Angel and Cyclops before leaving to visit her sister upstate. Meanwhile,
Count Nefaria has re-assembled his Maggia gang in the wake of his most recent defeat at the hands of Iron Man and has recruited five super-villain lieutenants. There remains one element missing from his master plan, and he decides that he must make the X-Men his allies. After dinner, Cyclops, Angel and Marvel Girl go their separate ways. Marvel Girl is attacked and captured by Plantman while Scarecrow takes out Angel. Hearing reports of X-Men sightings in Central Park, Beast leaves Iceman with the girls to make his excuses while he investigates. He is captured by Porcupine. Worried by Beast's absence, Iceman travels to Central Park and is attacked by Eel, but Cyclops arrives and knocks Eel out. The Unicorn appears, and with the help of a revived Eel, is able to capture the duo. Together, the team is taken to Count Nefaria's hideout where they are told they will join him, one way or the other. Nefaria intends to somehow steal Washington D.C., and the X-Men will retrieve the ransom for him.

Firsts and Other Notables: Count Nefaria started out as an Iron Man villain, the head of a branch of the Maggia (essentially the Mafia of the Marvel Universe). He popped up as the antagonist in various titles through the years, most often in "Iron Man" or "The Avengers", and usually as the leader of a gang of costumed super-villains (as in this issue) before receiving significant super powers himself. He continues to pop up from time to time, when a character or team needs to fight someone with a lot of power and little motivation beyond "he's evil." Nefaria will return to "X-Men" in time to be the first villain faced by the "All New, All Different" team, post-Giant Size X-Men #1.

The Porcupine, Plantman, the Eel, the Unicorn, and the Scarecrow are all C-List villains who appeared in other titles before this issue (when each is introduced in the story, they are accompanied by a helpful footnote denoting their last appearance). Each shows up throughout the years in various titles, usually, as in this issue, as part of a super villain gang or as a henchman to another villain.

A Work in Progress: Thomas continues to ramp up the angst, resurrecting the Cyclops-Marvel Girl-Angel love triangle and even has Professor X upset that the other X-Men can walk in the sun and feel the wind on their faces while he remains a hopeless cripple. Apparently, Xavier has one of those wheelchairs that can't go outside you've heard so much about. 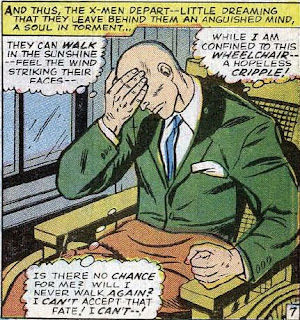 Ah, the Silver Age: The five costumed villains are very much a product of their time: one-dimensional characters defined by their gimmick.

Beast and Iceman, two teens in 1966, once again head out for a swinging night in Greenwich Village with their girlfriends dressed like the squarest accounts around. 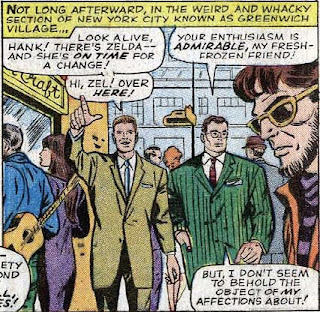 Maybe I'm too much of a pessimist, but if the Twins were "only" down five runs in a game, I'd be a lot less upset about the broadcast being interrupted than this guy: 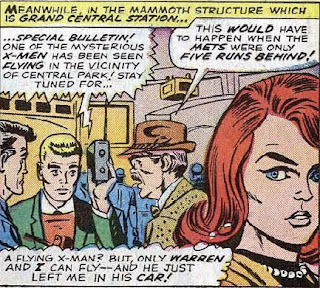 Young Love: Cyclops is overly-worried about Marvel Girl during their training session, and reminds himself to watch himself, for Jean must never know how much he cares about her. 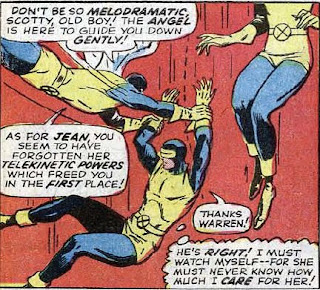 Later, Scott expresses his envy for the lovely couple Warren and Jean make together, and tags along with them just to be near her. 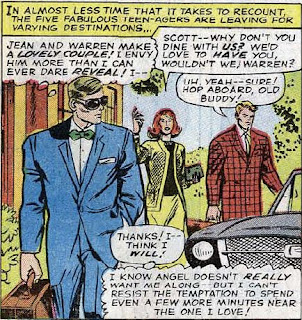 After Scott parts ways from Warren and Jean, Warren pines for Jean as she pines for Scott. 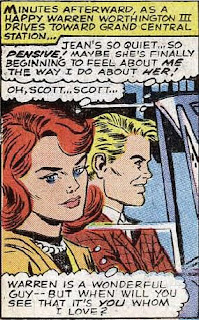 Hank mistakes some random dude for his girlfriend. Make of that what you will. 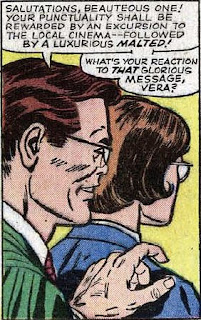 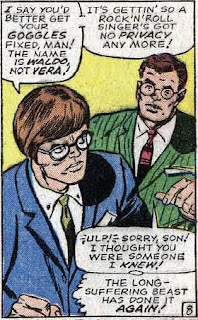 The Awesome and Terrible Power of Cyclops: A caption refers to Cyclops as "the most powerful and most tragic of the mutant band", and Cyclops thinks the only time he isn't a menace to society himself is when he's combating another menace. 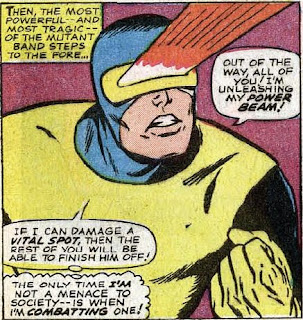 For Sale: Who wants to learn electrical appliance repair? 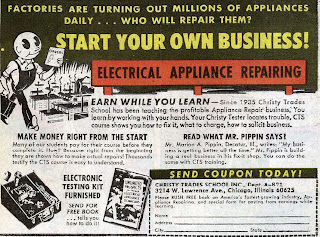 It's in the Mail: Professor X's powers explained. 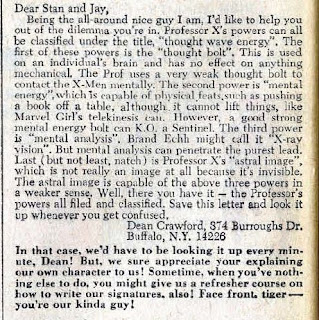 Teebore's Take: The big theme in this issue is teamwork: the title is "Divided We Fall" and when the X-Men work together at the beginning of the story they are able to defeat Colosso, but they fall to Nefaria's villains when they are picked off one by one. Aside from that and the fact that Nefaria's plan somehow involves the public's distrust of the X-Men, there's little that defines this story as an "X-Men" story. Thomas basically just dusts off six random and unrelated villains and has them team up against the X-Men for little discernible reason.

Of course, Thomas also cranks up the soap opera elements in this one: Scott wants Jean, Jean wants Scott, Warren wants Jean and they are all too scared to say anything, Hank and Bobby's girlfriends are mad that their boyfriends are running off with little explanation, and Hank is engaging in accidental homo-eroticism. Even Professor X gets in on the angst, suddenly upset that he can't walk and is, apparently, confined indoors while the others enjoy fresh air and sunshine.

While the soap opera elements and general angst have love been considered a staple of "X-Men" stories, it's interesting that while Stan Lee put some of it in play with the Scott/Jean romance, it's really Roy Thomas who ramped it up to the levels to which we're accustomed nowadays.
Newer Post Older Post Home
Posted by Austin Gorton at 7:00 PM