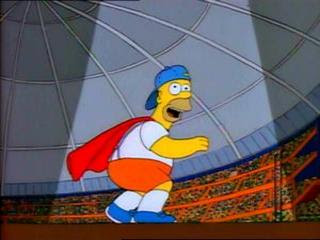 Or The One Where: Homer becomes the mascot of the Springfield Isotopes

The Setup: At the power plants annual baseball outing, Homer fires up the crowd by dancing on the dugout.

A Work In Progress: Tony Bennet guest stars as himself in this episode, the first guest star to do so.

The Capital City Goofball (the mascot of the Capital City Capitals) appears for the first time. He'll pop up occasionally in background shots after this.

Marge's line, "A Simpson on a T-shirt. I never thought I'd see the day" after Homer's established himself as the Isotopes Mascot, is a thinly-veiled reference to the growing popularity of the show and the legions of t-shirts produced to cash in on that popularity.

Homer: You know, boy, some of the players you see tonight may make it to the big leagues someday.
Bart: What? Aren't we going to see any washed-up major-leaguers?
Homer: Sure! We get a nice mix here.

Lisa: I can't think of a better place to spend a balmy summer's night than the old ball yard. There's just the green grass of the outfield, the crushed brick of the infield, and the white chalk lines that divide the man from the little boy.
Homer: Lisa, honey. You're forgetting the beer. It comes in 72-ounce tubs here.
Marge: I hope you’ll space out the tubs this year, Homer.
Homer: What are you getting at?
Marge: Well, last year you got a little rambunctious and mooned the poor umpire.
Homer: Marge, this ticket doesn't just give me a seat, it also gives me the right, no, the duty! to make a complete ass of myself.

Lisa: We're simple people with simple values. Capital City is too big and too complex. Everyone in Springfield knows us and has forgiven us. 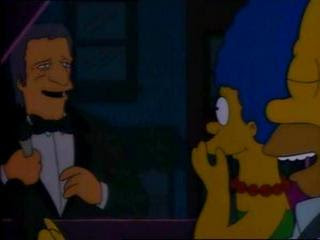 Teebore's Take: Despite the baseball trappings, this is my least favorite episode of the season, and one of my least favorite episodes overall. Which isn't to say this is a bad episode; later episodes have certainly been worse. This just isn't an episode I'm going to seek out very often, and if it's on TV, I'm more likely to flip past it to something else. I'm not exactly sure why I don't care for it. Perhaps it's because the flashback structure (in which Homer narrates the story to Moe and the barflies) robs the story of any urgency: we know Homer's move to Capital City won't work out, so the success of the episode hinges on his failure. When that turns out to be neither exciting nor funny (his schtick just doesn't play in the big city) the episode ends up flat.

Or it could just be that the episode isn't all that funny.

A dull episode that isn't terribly funny and adds very little to the show. 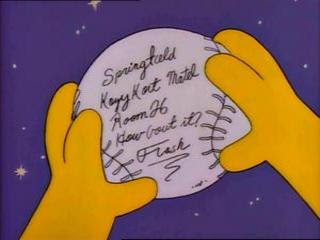