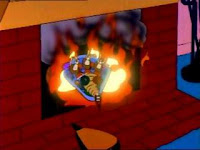 Or the One Where: Bart runs away on Thanksgiving

The Setup: After accidentally burning Lisa's table centerpiece, Bart, feeling unjustly punished and refusing to apologize, hits the streets.
A Work In Progress: To date, this remains the only Thanksgiving episode "The Simpsons" has ever done.

We see KBBL DJs Bill and Marty for the first time (their voices were heard in "Bart Gets an F").

Bill: Uh oh, here comes our friend, Bullwinkle J. Moose.
Homer: Heh heh heh, Bullwinkle's antler sprung a leak.
Bill: Uh oh, looks like ol' Bullwinkle's kinda gotten a taste of his own medicine.
Marty: He certainly does, Bill.
Bill: Wait, what did... Did what I say make sense?
Marty: Well, no, not really Bill.
Bill: Boy, now I know how the pilgrims felt.
Marty: What are you talking about, Bill?

Homer: And Lord, we are especially thankful for nuclear power, the cleanest, safest energy source there is. Except for solar, which is just a pipe dream. Anyway, we'd like to thank you for the occasional moments of peace and love our family has experienced. Well, not today, but... You saw what happened! Oh, Lord, be honest! Are we the most pathetic family in the universe or what!

Bart (after donating blood): Twelve bucks and a free cookie! What a country! 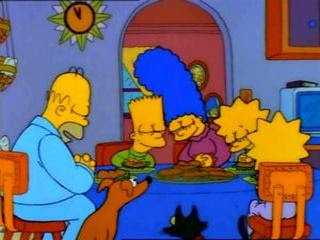 Teebore's Take: Another episode for which I've never particularly cared. The first act Thanksgiving stuff (the parade, Bart "helping" make the cranberry sauce, the half time show) is pretty funny but after that the episode gets more emotional and preachy. Part of the problem is that the focus of the story is on Bart, and throughout the story Bart perceives himself as the wronged party. While it's certainly believable that he would view himself as such, the episode almost seems to be asking the audience to do the same. And even as a kid, it was hard to sympathize with Bart over the treatment he got for not caring about tossing his sister's centerpiece into the fire.

Points for being the only Thanksgiving episode in "The Simpsons" exhaustive catalog (and for introducing Marge's mom, even if she rarely shows up), but otherwise uninspiring. 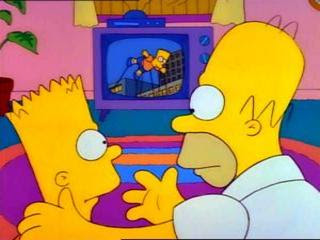