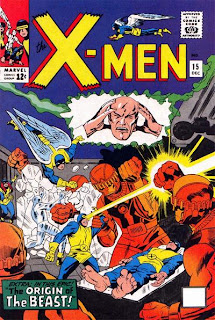 Plot: The X-Men survive the assault of the Sentinels' base and retreat to a distant beyond the range of their weapons. Meanwhile, the Sentinels take the captured Trask before Master Mold, their leader, and the Sentinel who, with Trask's help, manufacturers the other robots. He intends for Trask to help him create an army of Sentinels with which to enslave humanity for their own benefit. Outside the base, Beast and Iceman are captured attempting to infiltrate, and Iceman is knocked out while Master Mold uses a device called the Psycho Probe on Beast in an attempt to discover the location of the X-Men's headquarters. Cyclops, Angel, Marvel Girl and the astral form of Professor X invade the Sentinels' base. The three X-Men revive Iceman and tussle with some Sentinels while Professor X manages to free Beast from the effects of the Pyscho Probe. But the X-Men are ultimately overpowered by the Sentinels and with them defeated, Master Mold orders Trask to help him create an army of thousands of Sentinels.

Firsts and Other Notables: Master Mold, the gigantic creator and leader of the smaller Sentinels, debuts. He will earn place his own place in the X-Men's rogues gallery as a standalone villain apart from the Sentinels en masse, most notably by fusing Nimrod (an advanced Sentinel from the future) to form Bastion, the villain of the 90s "Operation: Zero Tolerance" crossover. 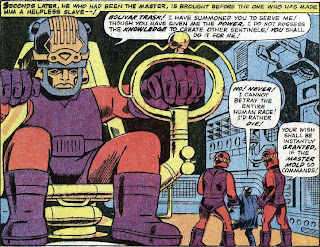 Beast's origin is detailed. Essentially, Hank was ridiculed for his animal-like appendages until finding success as an athlete, which brings him to the attention of Professor Xavier. When his success leads some to suspect Hank is a mutant, Xavier invites him to his school. This origin will be elaborated on later in the series, but aside from the addition of a one-note super-villain to the proceedings, little is changed.

Beast's parents also appear for the first time. Moreso than any of the other original X-Men, very little is ever done with them.

Jean is able to use her telekinesis to essentially fly alongside Angel.

While in his astral form, Xavier bombards Beast with "sharp thought particles." That frankly doesn't make much sense... 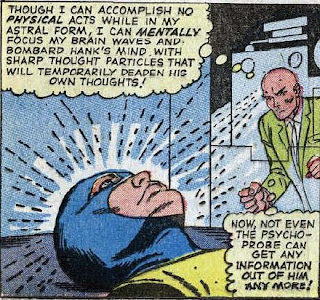 Ah, the Silver Age: Beast attributes his mutation to the fact that his parents worked at an atomic facility, further strengthening the correlation in these early issues between radiation and mutation.

The Sentinels fire "nature activator rays" at the X-Men, causing the landscape around them to go wild. They, of course, no exactly what they are.

Those same rays are being fired by three Sentinel gunners. And Professor X manages to knock them out using telepathy. 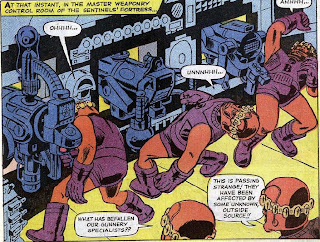 Iceman and Beast attempt to infiltrate the Sentinels' base by creating an ice glider then having Cyclops use the force of his optic blast launch them towards the base. The glider turns out to be less than aerodynamically sound, and when they are about to tumble off it, the Sentinels capture them and take them inside the base. Seems like that all "ice glider" plan wasn't too well thought out.

What do you mean, I don't get real X-Ray vision? 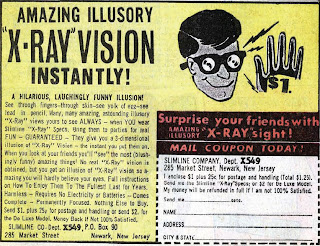 Teebore's Take: Aside from the introduction of Master Mold, this issue is little more than one long fight scene. Even Beast's origin is pedestrian and feels shoe-horned in to draw out the story (if making the X-Men mutants is an easy way of explaining how they got their powers, the downside, as we'll see further down the road, is that their "origin" stories are fairly dull and repetitive. Beast's, for example, follows the standard pattern of radiation-ridiculed for being different-feared for being different-running from a mob which garners the attention of Professor X).

It's always fun to see the X-Men fighting big robots, and this issue does have some Silver Age quirkiness to it, but has little beyond that going for it, especially coming after last issue.