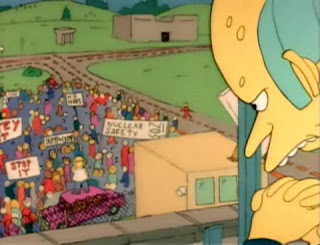 Or The One Where: Homer gets fired from the power plant (for the first time) and becomes a public safety advocate.

The Setup: While visiting the nuclear power plant on a field trip, Bart distracts Homer, who causes an accident and gets fired.

A Work in Progress: Smithers makes his first appearance (his voice was heard in the Christmas episode) and he's famously black (or really tan, as the producers told us to think of him in this episode), a mistake credited to the color stylist. The intention was always for the sycophanticSmithers to be Mr. Burns' Caucasian (so, in the world of the Simpsons, yellow) yes man.

Homer loses his job at the power plant, only to be rehired at the end as a safety inspector, the title most often used to describe his position at the plant. This makes this episode arguably the first of many, many "Homer loses his job" episodes. His middle initial, "J", is also established.

Chief Wiggum, school bus driver Otto, Jasper (Grandpa's bearded friend), the Winfields (the Simpsons' elderly neighbors), Sam and Larry (the two barflies that often appear alongside Barney and Homer at Moe's, who, surprisingly, have never developed into full-fledged supporting characters), and Sherri and Terry (the twin girls in Bart's class) appear for the first time.

Mr. Burns is voiced by Charlie Collins instead of Harry Shearer.

Also, we see Bart crank calling Moe for the first time. These crank calls were a well known element of many early episodes. 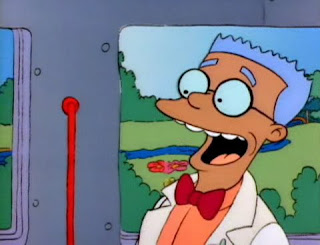 Announcer: Loaf-time, the cable network for the unemployed, will be back with more tips on how to win the lottery right after this.
Duff Beer commercial: Unemployed? Out of work? Sober? You sat around the house all day, but now it's Duff time! Duff, the beer that makes the days fly by!
Homer: Beer. Now there's a temporary solution.

Burns: You mean you're willing to give up a good job and a raise, just for your principles? Homer: Hmmmm, you put it that way it does sound a little far-fetched, but that's the lug your looking at... and I vow to continue spending every free minute I have crusading for safety. Of course, I'd have a lot less of those free minutes if you gave me the job.
Burns: You're not as stupid as you look, or sound, or our best testing indicates.

Teebore's Take: This is one of those episodes I often think about whenever Homer loses his job (or orchestrates some sort of expensive, zany scheme) in recent episodes, because this episode focuses almost entirely on the ramifications of Homer being unemployed, including Homer struggling with his identity when no longer the family provider and Marge getting back an old waitress job to help make ends meet. Whereas nowadays, such real world concerns are swept aside in favor of the outrageous plot or more gags. Not that this episode is all that great either, as it's largely forgettable, playing more like a traditional sitcom than an episode of "TheSimpsons." One thing that did stand out while rewatching it was Homer's attempted suicide in the second act. It's dealt with very causally, and while the gag of him dragging a boulder to a bridge, only to find a boulder there already is funny, the fact that Homer's situation leads him to suicide seems very morbid. It's the kind of plot that wouldn't occur in a traditional sitcom, but because this episode IS so traditional, it seems out of place.

Homer gets his well known position at the plant, Bart makes his first crank call, and a host of supporting characters debut, but the episode itself is fairly forgettable.
Newer Post Older Post Home
Posted by Austin Gorton at 10:18 AM