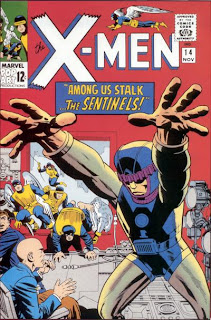 Plot: Having recovered from their injuries suffered at the hands of Juggernaut last issue, Xavier sends the X-Men away on vacation. Meanwhile, anthropologist Bolivar Trask announces to the world that he believes mutants to be a threat to humanity. Catching wind of his beliefs and fearing that the public will begin targeting mutants, Professor X arranges a televised debate with Trask to argue that mutants are not intending to enslave or eradicate humanity. During the debate, Trask unveils his Sentinels, advanced robots he intends to use as humanity's defense against mutants. The Sentinels quickly rebel, determining that the best way to save humanity is to rule over it. Professor X telepathically calls the X-Men for help while the majority of the Sentinels leave with Trask. After defeating the remaining Sentinel, Xavier and the X-Men manage to locate the Sentinel's hidden base but trigger its automatic defenses in the process.

Firsts and Other Notables: The Sentinels, robots designed to hunt and kill mutants, make their first appearance. In all their varied forms, they've remained a mainstay of "X-Men" mythology since this issue, coming to personify the human/mutant conflict that underscores so many "X-Men" stories. They also get trotted out whenever the X-Men need to get involved in a big fight scene without the audience worrying about any moral implications as they tear into their opponents.

Bolivar Trask also appears for the first time. He and his various family members, particularly his son Larry, are firmly entrenched in the X-Men mythology and will continue to plague the X-Men for years to come, whether creating some new form of Sentinel or generally representing human bigotry and antagonism towards mutants.

Angel's parents also make their first appearance. They seem nice, he gets along well with them, and they are rich. They are not aware, however, that Warren is a mutant. Later stories will dabble a bit with Warren's family (particularly a criminal uncle) but for the most part, his parents are notably only for eventually passing along his inheritance.

A Work in Progress: This is the issue that really establishes the theme of the X-Men as we know it. Previous issues had flirted with the notion of humans fearing and mistrusting mutants, as well as Xavier possessing some kind of agenda for the X-Men beyond "fighting evil mutants." All of that comes together in this issue, as the notion of humans fearing and hating mutants because they believe mutants mean to enslave/eradicate humanity is spelled out. This conflict between humans and mutants, and between mutants who embrace the public fear of mutant dominance (Magneto) and those who refute it (the X-Men) is such a bedrock of X-Men mythology now it's hard to believe it took fourteen issues (and almost three years) to really coalesce. 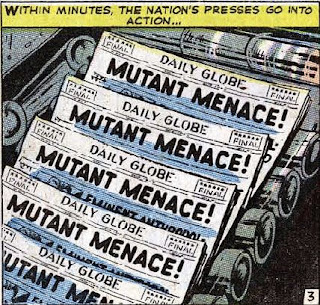 The Sentinels in this story are only slightly taller than humans, as opposed to the several-stories-tall variety of later incarnations most familiar to casual fans. They wait approximately four panels before rebelling against Trask and humanity, deciding that the best way to protect humanity is to enslave it. This is a key element of many Sentinel stories, regardless of their creator/model: if the Sentinels aren't hunting mutants for their master, they are rebelling against said master in order to enslave humanity for its own good.

Angel says that his wings began to appear when he was in military school and that he left because he couldn't risk having them discovered during a physical exam. This is largely forgotten and later contradicted by his "official" origin, which has Warren acting as a quasi-vigilante before Professor X recruits him to the team.

This is the first issue that Hank and Bobby's friendship stood out to me as being unique beyond just hanging out because they're on the same team.

Professor X can vaguely read the thoughts of the Sentinels. It doesn't come across as ridiculous as it sounds.

Due to "unprecedented demand" "X-Men" is published monthly as of this issue.

Ah, the Silver Age: Here's how Warren's wings get strapped down when he goes out in public: 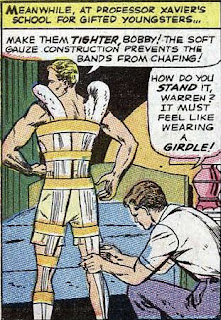 Trask says that everyone is too busy worrying about the Cold War and atomic bombs to see the mutant menace before them. 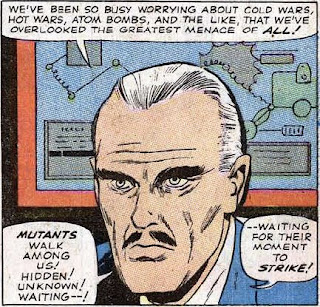 Professor X calls the "National Television Network" and demands to speak to the programming director. Within seconds, he's arranged a nationally televised debate between himself and Trask, which airs the next evening, preempting "two soap operas and a wildly heralded adult Western."

The moderator of the debate interrupts Trask's Sentinel demonstration to plug their sponsor. 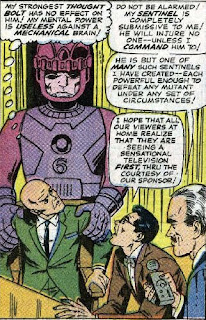 Professor X blames the Sentinels' rebellion on the fact that Trask was an anthropologist, not a robot expert. Apparently, as far as Xavier is concerned, ALL anthropologists are capable of creating sophisticated, artificially intelligent robotic lifeforms. But if you don't want said robots to rebel and enslave humanity, well, THEN you need a robot expert.

Hank and Bobby are spending their vacation at the now-officially christened Coffee-A-Go-Go. Because Jack Kirby, for all his skills, apparently had no idea what teenagers in the sixties wore, both are attired in their usual stuffy suits. And check out that groovy dialogue. 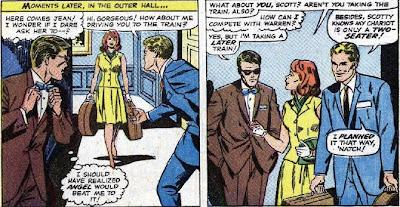 Bobby strikes out with Zelda after Professor X calls the team into action.

Human/Mutant Relations: An angry crowd watches Professor X's attempts at standing up for mutants and can't decide if he's a mutant, a communist or a Republican, apparently. 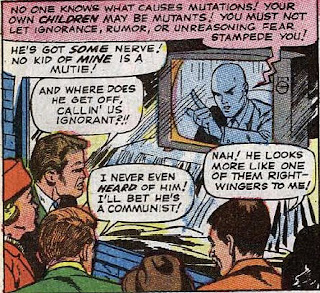 After his glasses accidentally fall off (...okay...) an angry mob chases Cyclops. It seems there's an angry mob just waiting to be formed on every New York corner. 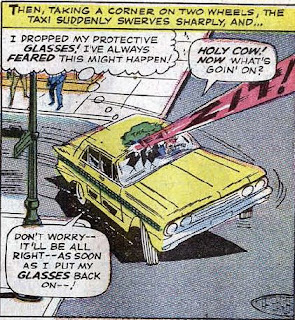 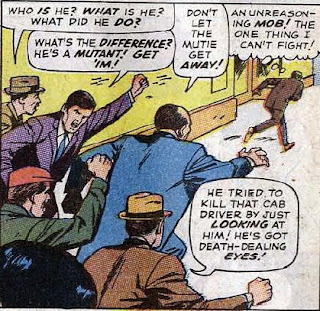 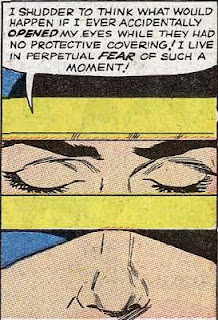 Later, Scott resigns himself to Jean leaving with Warren. 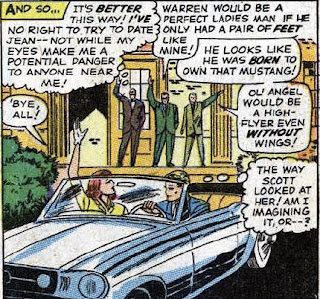 But it's okay, because Professor X feels his pain. 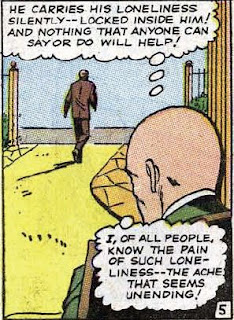 It's in the Mail: One letter writer asks how Cerebro detected Juggernaut when the story made it clear Juggernaut wasn't a mutant. The question is promptly dodged.

And why DIDN'T Dr. Strange help out against the Juggernaut? 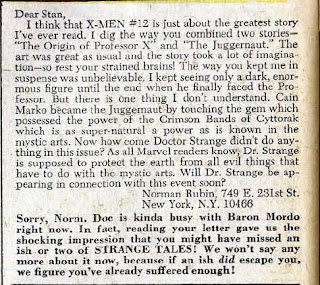 Teebore's Take: This is arguably the most important issue of the series since #1. For all the talk of "evil mutants" and the vague unrest between humans and mutants, the book really suffered a lack of theme and focus to contextualize the otherwise standard Silver Age slugfests. By moving the human/mutant conflict to the forefront, "X-Men" gains a theme that will not only define this title in the decades to come, but an entire sub-genre of books within the greater Marvel Universe. Even Magneto, though he doesn't appear (or warrant a mention) in this issue, gets immediately re-contextualized as the kind of mutant Trask built the Sentinels to stop. Suddenly, all of Magento's past appearances resonate beyond his vague pronouncements of superiority and acts of super-villainy. While the human/mutant conflict doesn't become the book's sole focus moving ahead, it remains the defining characteristic of the book.

Beyond all that, the issue is fun to read, with several character moments further fleshing out the cast and some enjoyable fight scenes featuring the X-Men fighting big robots (which, of course, is why the Sentinels themselves stick around as well as the themes they helped introduced). Toss in some Silver Age silliness as well as some Cold War commentary (the cure is worse than the disease, as Trask's attempt to prevent enslavement by mutants results in enslavement by robots) and this is easily one of the best issues thus far.