Or The One Where: Bart builds an army of kids and goes to war with Nelson

The Setup: Bart defends Lisa from one of Nelson's toadies, drawing the wraith of the bully himself.

A Work In Progress: Nelson appears for the first time. While he always maintains his status as a something of a bully, he is never again as menacing as he is here, and obviously becomes one of the show's most well-known supporting characters (his even more well known catchphrase is not used in this episode, however). In the first wave of Simpsons action figures, Nelson was one of the only non-Simpson family characters to warrant a figure, ostensibly because the line was trying to sell him as the villain of the piece, due to this episode.

Herman, the one-armed owner of the military surplus store to which Grandpa takes Bart, is also introduced. Harry Shearer voices the character in a voice inspired by Bush the Elder. Herman is another one of those early season supporting characters that faded into the background while others rose to prominence.

Marge: Well, Bart, I hope you're going straight to the principal about this.
Bart: I... guess I could do that.
Homer: What!? And violate the code of the schoolyard!? I'd rather Bart die!
Marge: What on earth are you talking about, Homer!?
Homer: The code of the schoolyard, Marge! The rules that teach a boy to be a man. Let's see. Don't tattle. Always make fun of those different from you. Never say anything, unless you're sure everyone feels exactly the same way you do.

Herman: How many men do you have?
Bart: None.
Herman: You'll need more.

Bart: Ladies and gentlemen, boys and girls. Contrary to what you've just seen, war is neither glamorous nor fun. There are no winners, only losers. There are no good wars, with the following exceptions: The American Revolution, World War II, and the Star Wars Trilogy.

Teebore's Take: After "Bart the Genius" this was the episode that really cemented Bart as the star of the show in its early goings. I've always had a certain fondness for this episode, though it isn't the best of the first season. Marge's naivete regarding Nelson (she suggest they try talking it out) is hilariously frustrating, and I love the fact that even when Bart fights back one-on-one against Nelson, nothing Homer teaches him works. Also, watching it again recently, I questioned the effectiveness of Bart's army using water balloons as their primary weapon against Nelson at the end. Even in terms of non-lethal, kid-friendly, network-appeasing weapons there has to be something better than water balloons: what's the worse thing that can happen? Nelson gets wet? And once he's wet, why would he care if he continues to be pummeled by balloons?

Bart's star continues to rise while a bully is born. 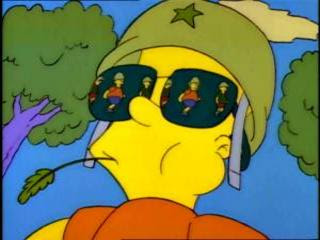