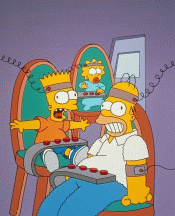 Or The One Where: Homer takes the family to therapy.

The Setup: Bart, Lisa and Marge's behavior embarrasses Homer at the company picnic, leading him to seek help in fixing his dysfunctional family.

A Work in Progress: Eddie and Lou, the two cops that work with Chief Wiggum, appear for the first time. Both are colored yellow, though Lou will be black in all subsequent appearances.

This is also the first appearance of Dr. Marvin Monroe, the psychiatrist who was a minor supporting character in the early seasons, before dyingoffscreen (as revealed in the "133rd Episode Extravaganza" episode in season seven).

An "Itchy and Scratchy" cartoon is seen for the first time.

Stately Burns Manor appears for the first time, and Burns threatens to release the hounds at the end of the picnic. The house is drawn to resemble Charles Foster Kane's Xanadu in "Citizen Kane", making this episode the first of several that will parody or homage that film.

Homer: Sometimes I think we're the worst family in town.
Marge: Maybe we should move to a larger community.

Moe: Eddie! Would you like some pretzels?
Eddie: No thanks, we're on duty. A couple of beers would be nice though.

Homer: When will I learn? The answer to life's problems aren't at the bottom of a bottle, they're on TV!

Teebore's Take: There's some good gags here (the scenes at Marvin Monroe's clinic, for example, especially the end with everyone shocking each other) but really stands out about this episode now is how out of character everyone is. Lisa is relatively underdeveloped and basically just plays off Bart's mischief, but how odd is it that HOMER is the oneembarrassed by the family, striving to make them more "normal", even willing to sell the TV to do so, while Marge gets drunk and basically shrugs off Homer's concern about the family? The plot reads like a Marge episode with Homer cast in the lead, and it's hard to get past characterization that reminds of us just how early an episode this is.

An episode that stands out by being atypical, not exactly a classic. Though the sequence at Marvin Monroe's clinic IS classic Simpsons. So kind of a draw... 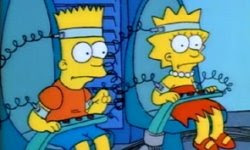