Retro Review: Behind the Laughter

AKA: a parody of VH1's "Behind the Music" series.

The Setup: The Simpson family is, in fact, a regular family that writes and acts in "The Simpsons" television show.

Marge: Homer kept saying he could do a more realistic family show. Finally I said, "So do it. Either *bleep* or get off the pot.
Narrator: And *bleep* he did.

Lenny: Even Bart was throwing dough around. He paid me and Carl a thousand bucks to kiss each other.
Carl: Hey, did we ever get that money?
Narrator: But reckless spending and interracial homoeroticism were just volume one of the Encyclopedia Self-Destructica.

Narrator: The dream was over. Coming up: was the dream really over? Yes it was. Or was it?

Narrator: The Simpsons' TV show started out on a wing and a prayer, but now the wing was on fire, and the prayer had been answered ... by Satan.

Teebore's Take: The largely mediocre season goes out on a high note with this spot-on and hilarious parody of VH1's "Behind the Music" specifically and celebrity-ism in general. The episode also works in a fair amount of meta-textual commentary along the way, pointing out and mocking the flood of high profile guest stars in recent years, as well as the zany plots (like the episode that suggested Principal Skinner usurped the identity of an older solider in Vietnam and is actually a man named Armin Tamzarian). It's certainly an atypical episode, but it does manage to end the season with us laughing. 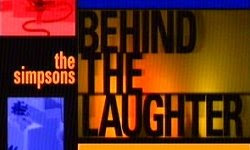 Like the Halloween episodes, it's tough to calculate the zaniness in an episode that exists outside continuity, such as it were (Kang and Kodos, avatars of a non-canon episode, even appear in this one).

Within the context of this episode, though, I'll award a Gazoo for the suggestion that all of Homer's physical humor could actually be performed by a real person, and that hormone pills could account for the lack of Simpson kid growth through the years.

The Homer of this episode isn't the "real" Homer, but he's still kind of a jerk-ass throughout, what with drugging the kids, threatening to fire Marge, and generally lording over the Simpsons' entertainment empire. 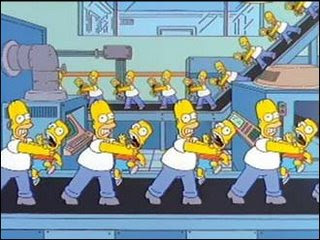 And with that, the eleventh season of "The Simpsons" comes to a close. As a season widely regarded as one in which the wheels really come off the show, I was surprised by how mediocre most of the episodes were. Aside from a few gems ("Grift of the Magi", "The Mansion Family" and "Last Tap Dance in Springfield"), a few outright terrible episodes ("Guess Who's Coming to Criticize Dinner","Alone Again, Natura-diddly", and "Kill the Alligator and Run) and one episode I love but really shouldn't ("Saddlesore Galactica"), most of this season's output was pretty blah, characterized by episodes that hung a few good jokes on a weak plot and tossed in some zany twists.

Season twelve comes out on DVD in mid-August and it's considered by some to be one of the show's worst seasons (it's also the last of the "Mike Scully" seasons, though his influence continues to be felt to this day). We shall see, but in the meantime, it seems that season eleven is straddling the fence: neither as good as what's come before, nor as bad as what's to come. Which, either way, makes for a pretty boring viewing experience.
Newer Post Older Post Home
Posted by Austin Gorton at 4:05 PM