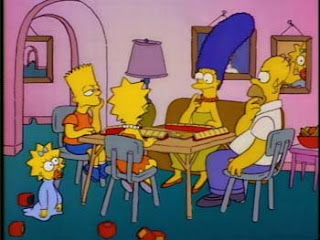 After finishing the eleventh season of "The Simpsons" Mrs. Teebore decided she hasn't seen enough of the early episodes, and would like to go back and watch the show from the beginning. Who am I to argue with watching more Simpsons?

And so "The Simpsons" Retro Reviews jump back to the very beginning of the show. With that in mind, I've added a "work in progress" field in which I'll point out character first appearances,significant continuity developments, and other items of note as the show grows into what we all know and love. And since the consistently zany episodes are several seasons away at this point (and because Homer is a vastly different character at this point) I'll be passing upGazoos and Jerk-ass Homers in favor of ranking how classic each episode is, on a scale of one to five decapitated Jebediah Springfield statue heads. As always, such rankings are completely arbitrary and not at all scientific.

Or the One Where: Bart fakes being a genius.

The Setup: Bart puts his name on Martin's aptitude test, prompting the school psychologist to diagnose Bart's misbehavior as acts of intellectual boredom, enrolling him a private school for geniuses.

A Work In Progress: This is the show's first regular season episode* and as such the full title sequence, including the chalkboard and couch gags, are seen for the first time. The idea behind the extra long opening (even by 1990s standards) was to eat up some time that didn't require new animation every episode. The couch and chalkboard gags were then added to prevent the entire title sequence from being a complete waste of the viewers time.

Martin Prince, and Bart's teacher Mrs. Krabappel, appear for the first time, as does school psychologist J. Loren Prior, one of the few supporting characters who disappears later in theshow's run.

Bart's catchphrase "eat my shorts" is said for the first time.

Homer's voice is slightly different from what we're used to in these early episodes. The story goes that Dan Castellenetta was originally going for a Walter Mathau-type voice for the character, before settling on the voice with which we're all familiar.

Bart: Here we go. Kwyjibo. K-W-Y-J-I-B-O. Twenty-two points, plus triple-word-score, plus fifty points for using all my letters. Game's over. I'm outta here.
Homer: Wait a minute, you little cheater! You're not going anywhere until you tell me what a kwyjibo is.
Bart: Kwyjibo. Uh... a big, dumb, balding North American ape. With no chin.
Marge: And a short temper.
Homer: I'll show you a big, dumb, balding ape!
Bart: Uh oh. Kwyjibo on the loose!

Krabappel: Now I don't want you to worry, class. These test will have no effect on your grade. They merely determine your future social status and financial success.

Teebore's Take: I've probably seen this episode more than any other first season episode, not because I particularly enjoy it, but because, being the first episode of the series, it gets replayed more than other early eps . I may not love it as much as some other episodes (even in the first season), but it's a good episode, establishing the tone of the series early on and while the jokes aren't as quotable or memorable as what will come, it definitely has its funny moments. The focus of the episode is squarely on Bart, which makes sense as the first two seasons or so are considered the "Bart-centric" seasons (until Homer slowly edged his way into the spotlight starting in seasons three and four). As such, the early days of "Simpsons-mania" revolved around Bart and his catchphrases, and all that started here. However, for all of Bart's "problem child" rebelliousness and pranks, he's always been surprisingly sensitive at times. This episode showcases this as well, something I'd forgotten. In the end, what Bart finds himself enjoying the most about being considered a genius is the attention and respect he gets from Homer as a result. It shows that while Bart's "underachiever and proud of it" attitude is what made him popular, the character was more than that from the very beginning.

Well, this is the episode that started the 20-year-old (and growing) phenomenon, and established Bart as the show's go-to character in the early goings. It's also a well done and funny episode, even beyond season one standards.

*Yes, the Christmas episode "Simpsons Roasting on an Open Fire" aired before this episode, and appears before it on the season one DVD set, but I'm starting this series of reviews with the first episode of the full season, because "Simpsons Roasting..." aired several weeks before "Bart the Genius" as a stand alone Christmas episode, and because I try to avoid watching Christmas-themed things when it's not Christmas. Maybe I'll do a full Retro Review for it when the holidays roll around again.
Newer Post Older Post Home
Posted by Austin Gorton at 10:11 AM